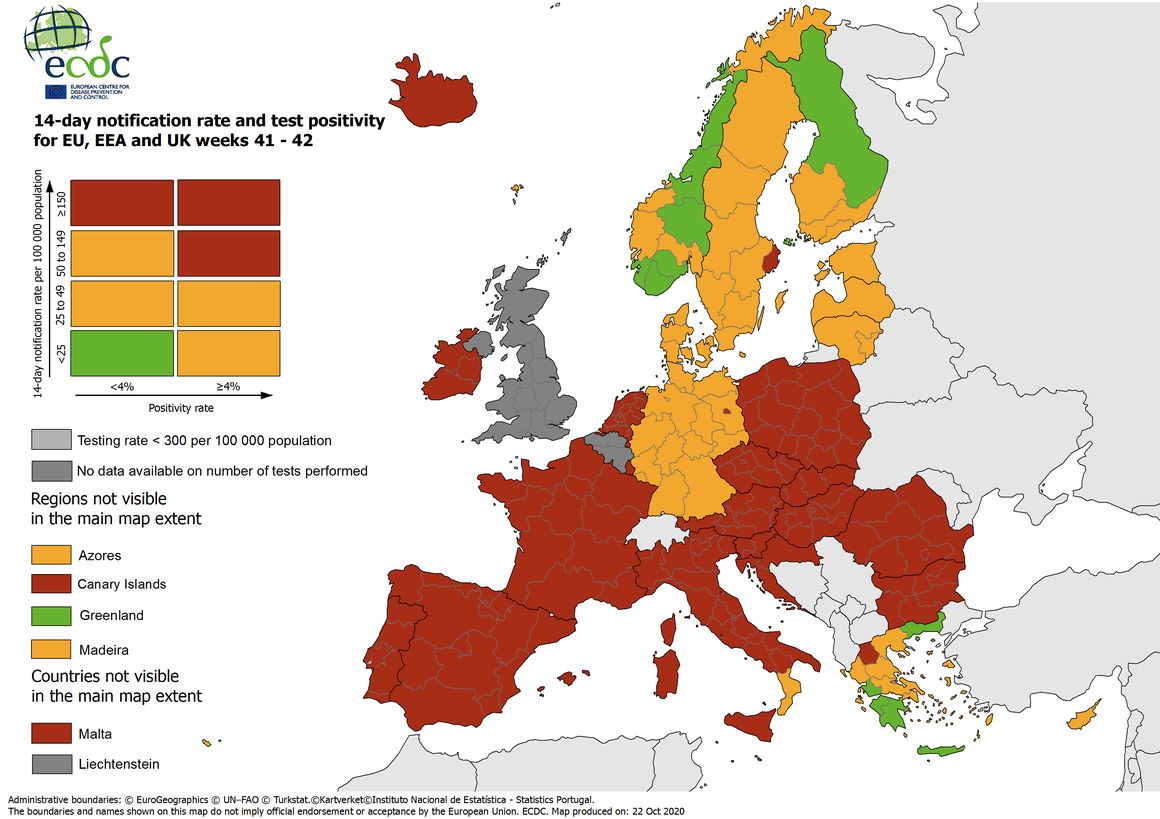 Despite Greece’s fresh spike in coronavirus (Covid-19) cases, which has caused the country to take extra measures to limit the spread of the virus, the country’s risk level is considered low to moderate when compared to other European countries, according to the updated health map released by the European Center for Disease Control and Prevention (ECDC) on Thursday.

The weekly colour-coded map shows the risk levels across the regions in Europe, based on local epidemiological data and by using a traffic light system. Through the map, ECDC aims to provide data to help countries better coordinate their travel restrictions.

In its latest updated health map, ECDC assesses the risk for the general population and vulnerable individuals in relation to the increase in Covid-19 notification rates in the European Union/European Economic Area (EU/EEA) and the United Kingdom (UK).

According to the update, the current epidemiological situation in most countries is a serious concern as it poses an increasing risk of transmission, requiring immediate public health action.

Only 6 countries in stable epidemiological situation

“There are currently only six countries in the region (colored orange and green) that are classified as experiencing a stable epidemiological situation,” ECDC said, adding that the probability of infection for the population of those countries is generally low but the impact of infection still varies depending on the individuals affected.

“The risk for the general population in these countries is low. However, for vulnerable individuals, including the elderly and people with underlying medical conditions, the risk is moderate. Nevertheless, in these six countries, there is still ongoing transmission and the situation must be closely monitored,” ECDC said.

Regarding Greece, according to the map, the Covid-19 risk appears low for the general population in southern Greece, eastern Macedonia and Thrace. Attica, along with the rest of central Greece, Macedonia and Epirus are considered areas of moderate risk, while only certain areas of Central Macedonia are high risk.

In contrast to Greece, the vast majority of European countries are characterized as countries of high epidemiological risk, with the exception of some countries of central-northern Europe that appear to be of moderate risk.

Guidance on Greece’s Covid-19 Rules for Masks and Curfew