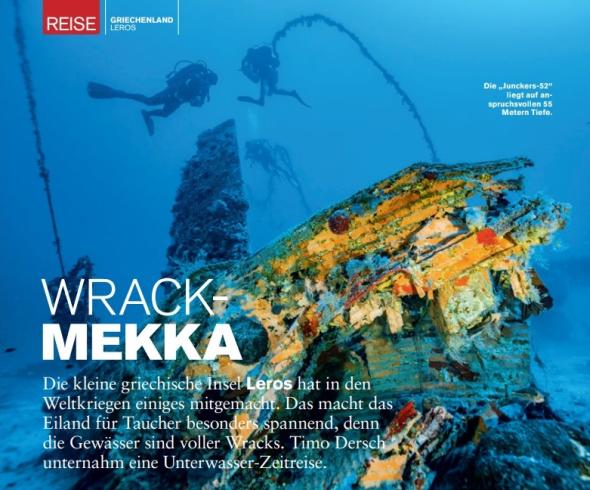 Germany’s “Tauchen” travel magazine highlights Leros, a tiny Greek island in the Dodecanese, as a prime diving destination due to its underwater treasures and unique features.

Timo Dersch, the magazine’s journalist, visited Leros last fall during a press trip organized by the Greek National Tourism Organization’s (GNTO) office in Germany, with the support of the Leros Municipality and local tourism professionals.

Dersch refers to Leros as the “Mecca of wrecks” and a “paradise for divers” due to its significant historical monuments that lie on its seabed. “Wreck diving means diving into history. Wrecks are fascinating witnesses of the past and history… At the same time, they are uniquely integrated into the sea world, offering new life to marine population,” he says.

The journalist’s report was also published on the popular German travel blog www.reisedepeschen.de.

“Tauchen Magazin” it is one of Europe’s most significant travel magazines with an average monthly circulation of 25,000 copies. Its readers are highly educated, high-income travelers of 52 years old on average.

The upcoming May edition includes an extensive article to Mediterranean destinations such as Greece, Malta and Croatia.

“The magazine urges its readers to save tourism and it focuses with optimism on the ‘next day’ in tourism, after the coronavirus pandemic subsides,” the GNTO said in an announcement.