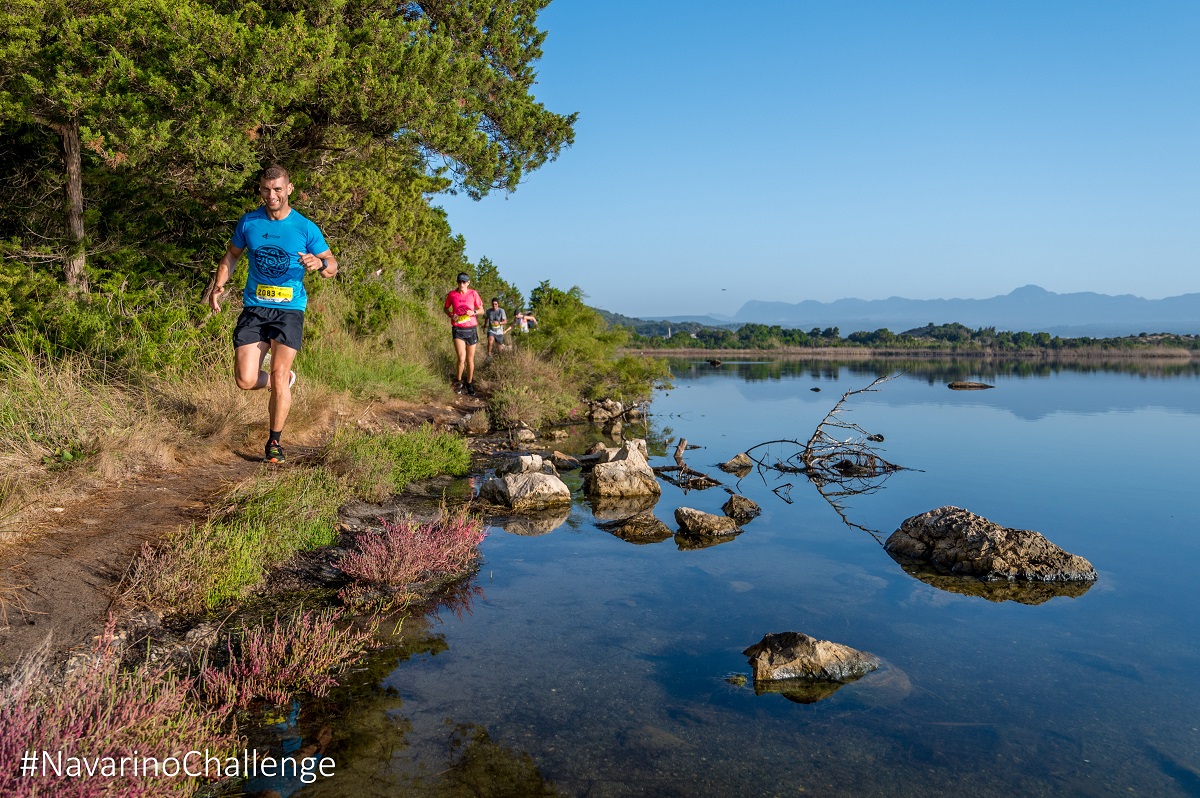 More than 2,700 professional and amateur athletes of all ages participated in the Navarino Challenge 2019 sports tourism event, which was held from 11-13 October, at Costa Navarino in Messinia.

The award-winning Navarino Challenge, recently recognized as the best sports event with a platinum award at the Sports Marketing Awards 2019, united according to its central message “Sports Unite People”, people of all ages for the 7th consecutive year .

With a rich program of more than 30 activities, the event, hosted by The Westin Resort Costa Navarino, supported the ideals of the Olympic Movement, contributing towards the development of a peaceful and better world without any discrimination, through sports. 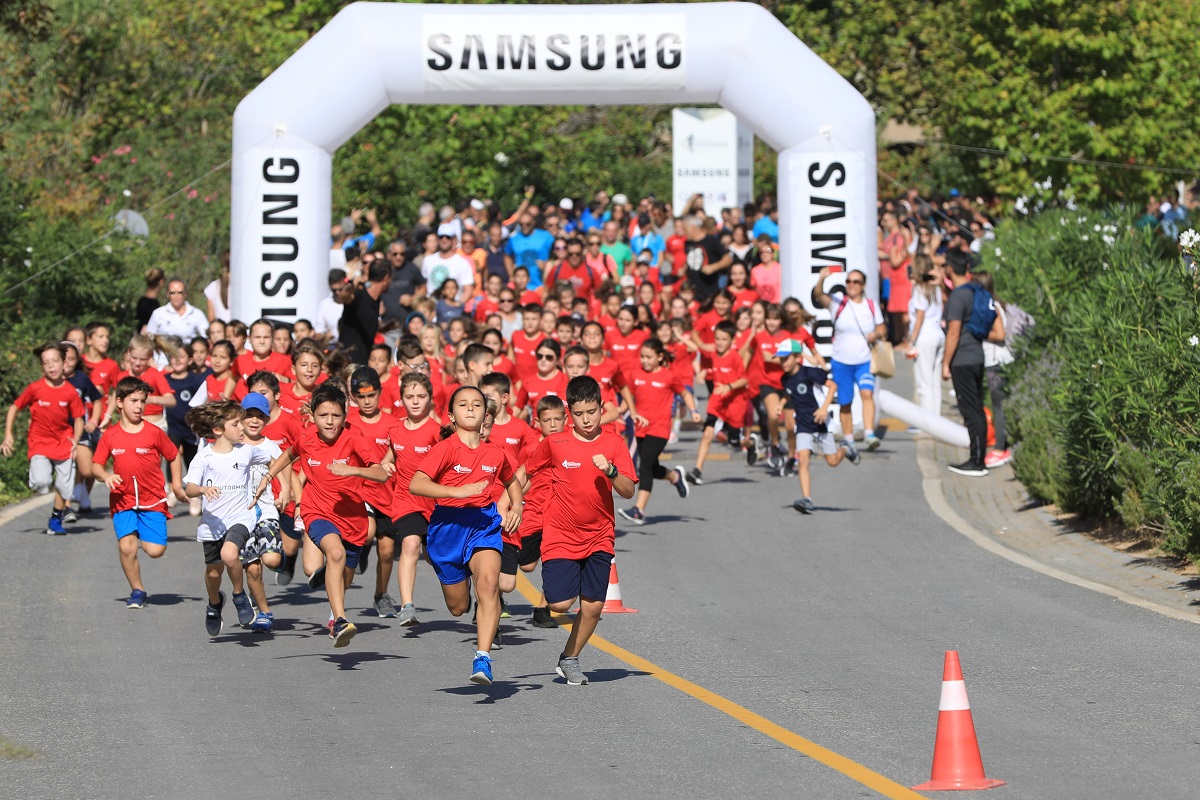 The full schedule of the event included activities for the whole family within 3 days. On Friday, October 11, Greek Hall Of Fame basketball athlete Nick Galis, as this year’s guest of honour, was the one to tip off the 4on4 basketball tournament by Nutramins that was held with the participation of the basketball legend Joe Arlaouckas and twice silver Olympic medalist Alexandros Nikolaidis. The day continued with many sports activities and ended with the screening of Barney Spender and Roddy Gibson’s award-winning documentary “The Road to Sparta” at the Agora, Costa Navarino. 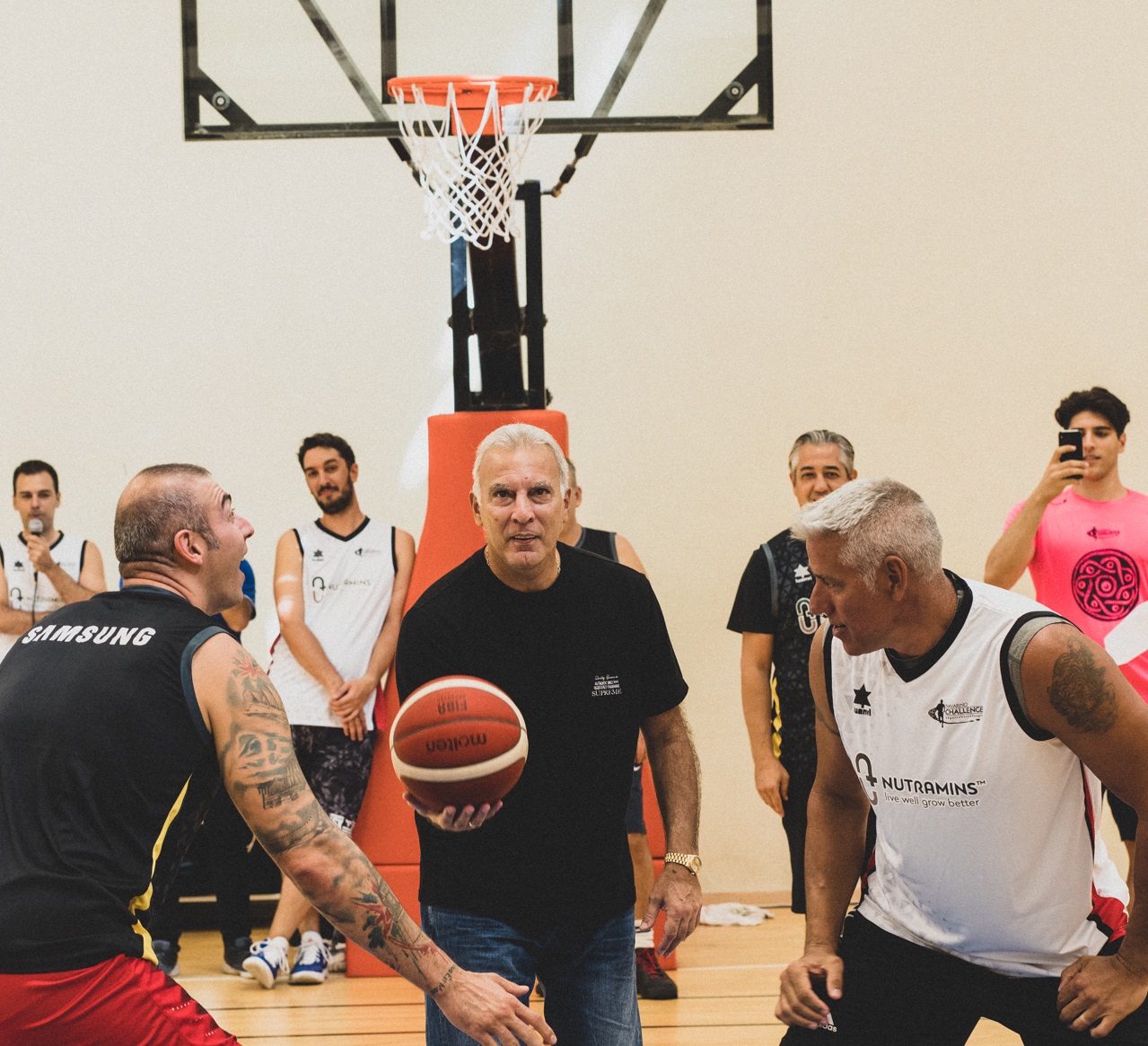 Messinia at the center of sports tourism

On Saturday, October 12 sport action was held in the Municipality of Pylos-Nestor that supported the event for another year and helped in the smooth implementation of the activities at Navarino Bay with the assistance of local companies. For the first time in the event, participants had the opportunity to try sea kayaking and headed to the island of Sphacteria with the support of Explore Messinia. 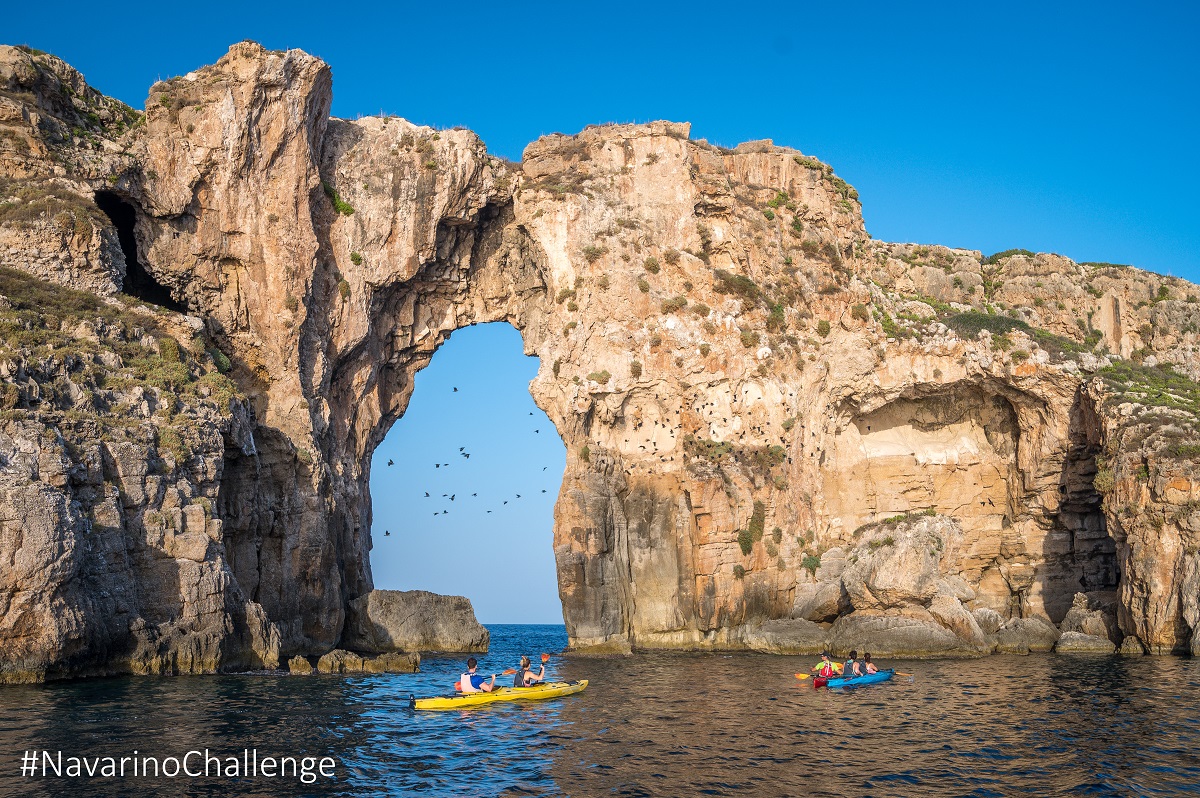 Right after, open water swimming enthusiasts had the chance to compete in a chip-timed event at the beautiful Navarino bay from the scenic Pylos harbor, covering the unique 1 mile (1.6 km) route of the open water swimming race by Vikos. The swimming event was held with absolute safety with the approval of the Hellenic Swimming Federation, according to FINA’s regulations and the support of Pylos Hellenic Coast Guard and Pylos-Nestor Municipality.

The route was designed by the national federal technical coach, Nikos Gemelos. 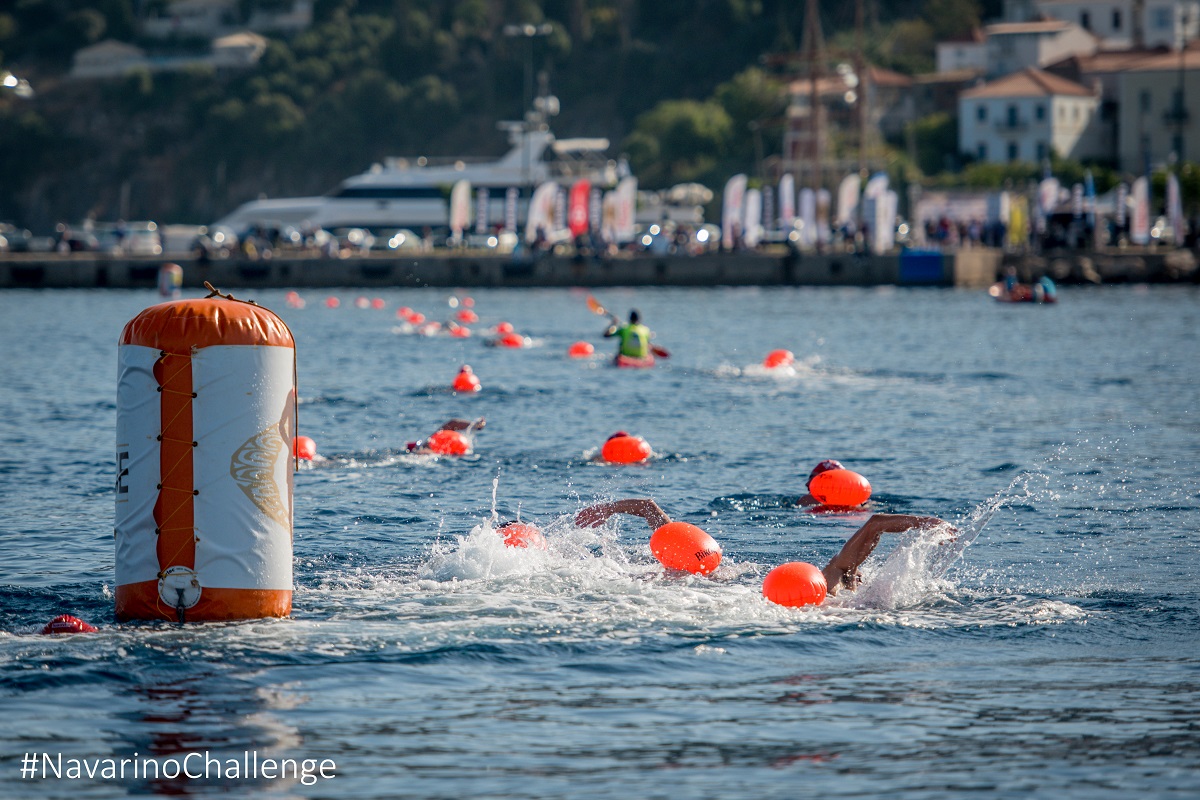 “Challenge The Wind” interclub sailing race of triangle course with OPTIMIST and LASER 4.7 boats was co-organized with the Maritime Athletic Pylos Association “Nestor”.

The sea actions also marked the beginning of the “Navarinia” event for the 192-year anniversary from the Battle of Navarino, which will culminate this week.

A visit to the refurbished family home of the Olympic champion, Kostis Tsiklitiras, was held with the presence of Olympic medalist Spyros Gianniotis. 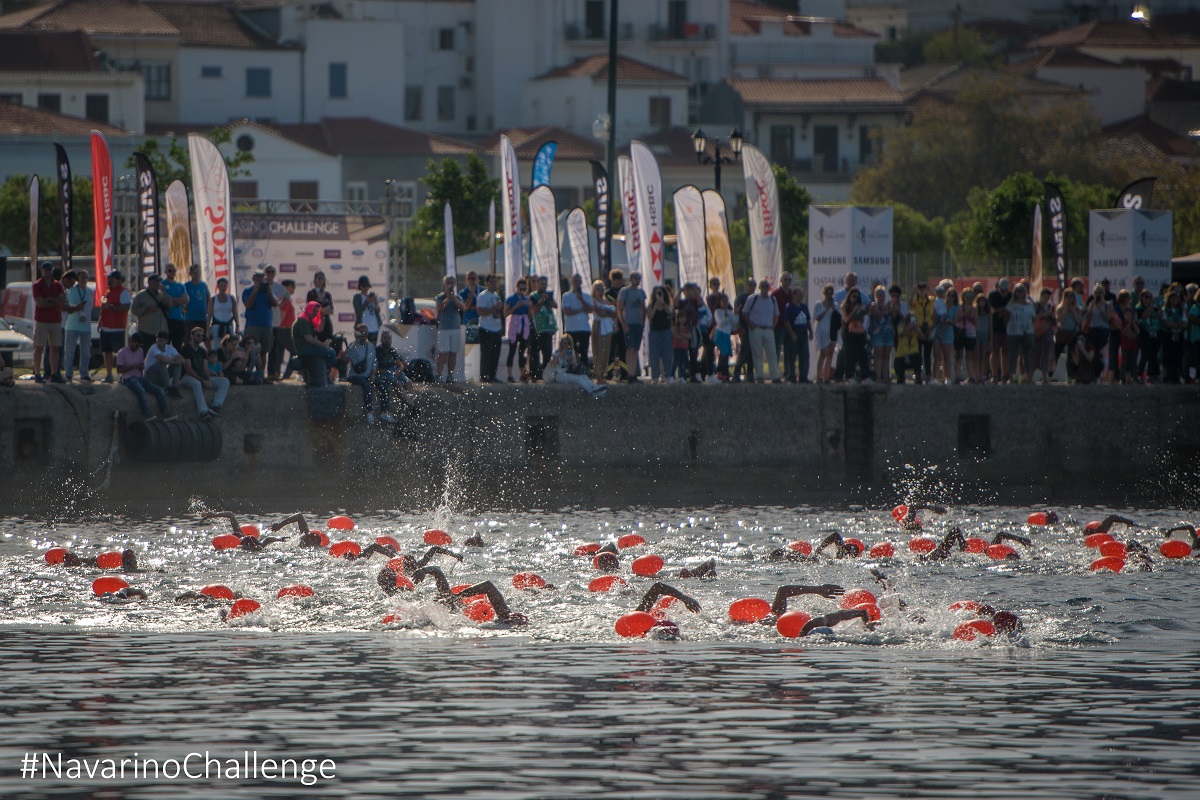 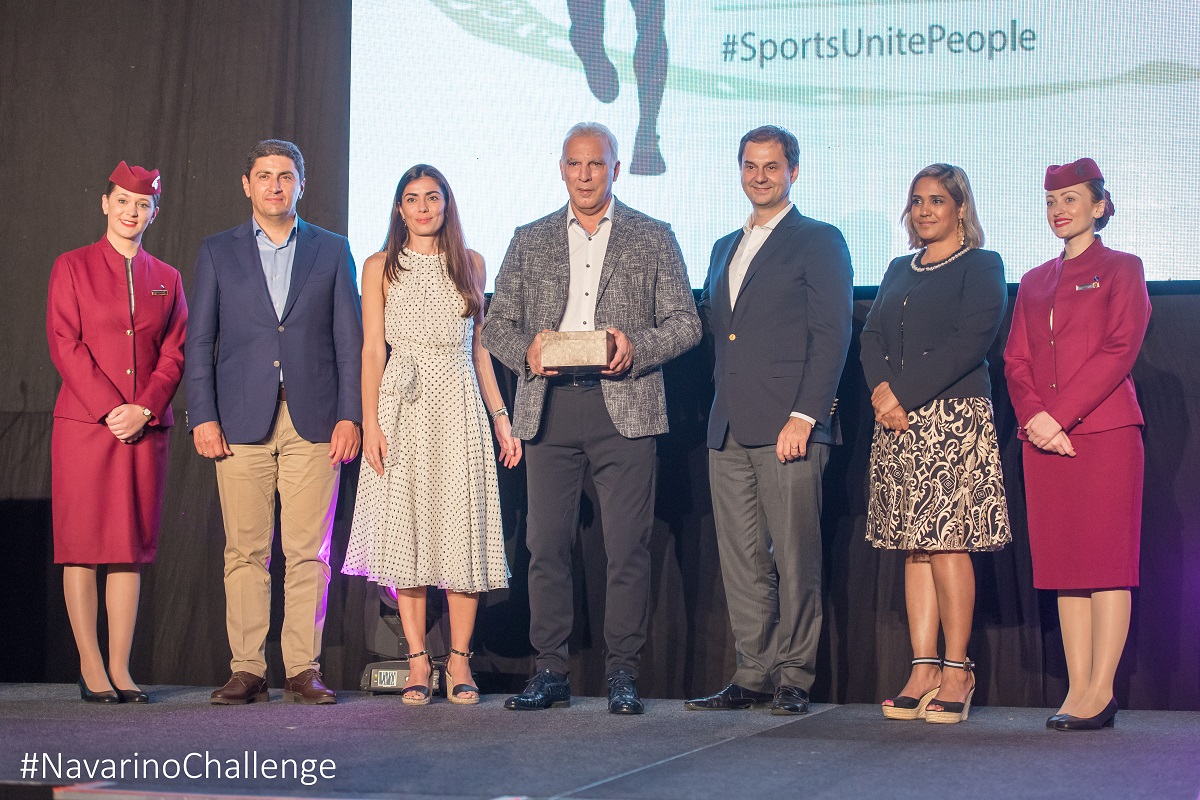 Qatar Airways surprised participants with the Puzzle Challenge competition created through the special application (https://www.qatarairwayschallenge.com/). Contest continues until October 21 with a gift of two round-trip airline tickets to over 160 places across the globe on Qatar Airways’ global network.  “A Night to Remember by Qatar Airways” was assisted by Kayak, Karoulias, Lafazanis, Nestor, while the specially designed awards of the event, were created by PHEE and Nestor Winery.

On Sunday, October 13, professional and amateur runners tested their skills on the routes of 5km by Samsung (running & dynamic walking), 10km by PlantBox and Ford Go Further Greek Half-Marathon (21.1km). The Half-Marathon route is described by runners as one of the most beautiful around the world, whereas the 5km route was the one that really impressed participants. Navarino Challenge was included in World’s Marathons world community with runners from the Sport Club with people with special needs from Kalamata, “Diaforozo”, celebrating their participation at the event one day before the International White Cane Day (October 15th). The routes were designed by the former marathon runner, holder of national best performance on the classical route, running coach and director of All About Running, Nikos Polias. During the event, all participants were timed. All running races are co-organized with Messiniakos Gymnastic Club, EAS SEGAS Peloponnese Region and the approval of the Hellenic Athletics Federation [SEGAS]. Hellenic Rescue Team – Messinia Department and the event’s medical partner, Athens Medical Group, ensured the safety of the races.

Later on, the children’s 1km race (supported by VIKOS) took place, with the dynamic presence of children from the wider region as well as clubs such as Messiniakos, GC Akritas 2016 and Pylos Maritime Sports Club.

Aiming to the protection of the environment and the adoption of a more eco-friendly strategy, the event proceeded with the following actions, among others: a) declared the start and end points of the Navarino Dunes runways as strictly smoke-free areas, b) declared the beautiful Voidokilia beach, which the runners crossed, as strictly plastic-free, c) offered participants an eco-friendly bag by Luanvi, event’s official sports supplier.

The fiist sports event worldwide with a medal made of seagrass

The event innovated with another surprise. This year’s participants received a medal made only of seagrass from the event’s official supporter, PHEE, a company that innovates by promoting the principles of “green” entrepreneurship and the re-use of natural resources.

Moreover, the event offered each participant an olive tree by PlantBox. At the same time, all participants received high quality cosmetics by Messinian Spa. 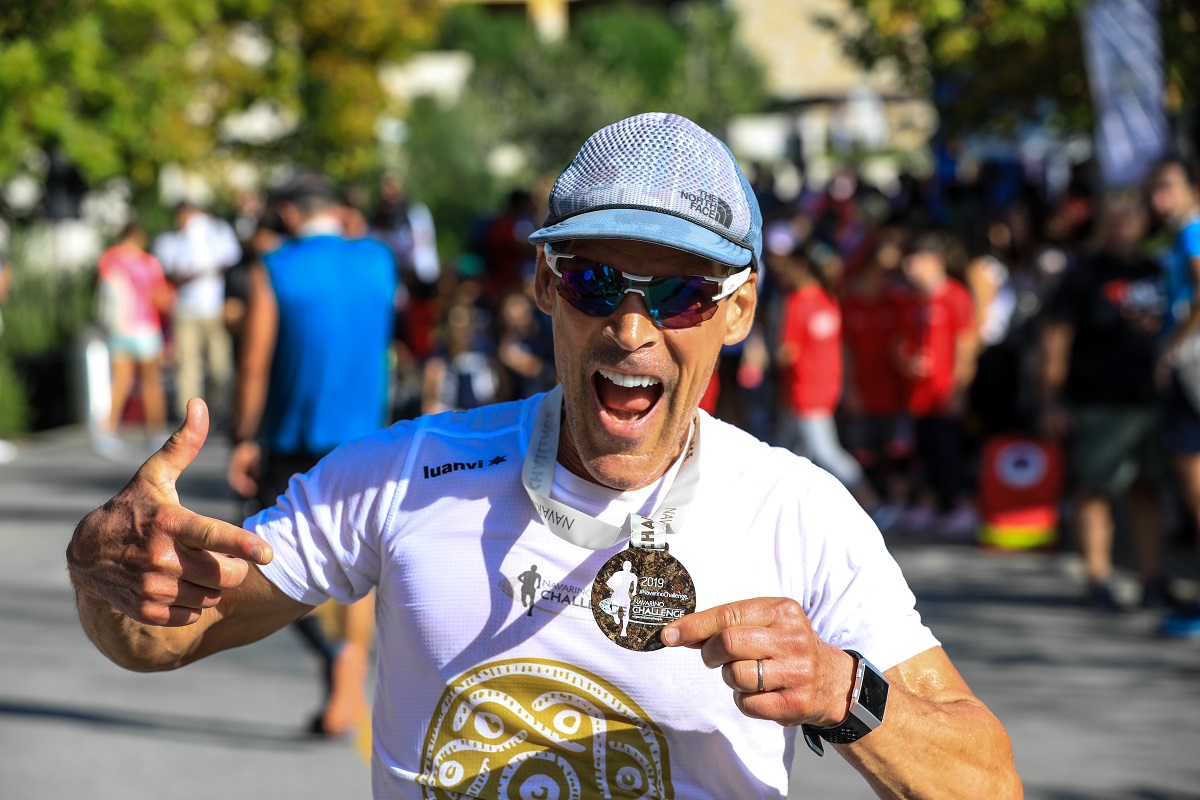 As the official sports supplier of Navarino Challenge, LUANVI, the leading force in the field of sports apparel offered once again the official t-shirt of the event (made 100% of cotton). A special technical t-shirt for the participants, that as of last year contains elements from Messinia to enhance the feeling of remembering and unforgettable experience in order to highlight the cultural elements of the area. With this criterion in mind, the ancient symbol rodakas, found also during the Byzantine period whilst dominating Messinian life in ancient Greece, appeared on the t-shirt this year. At the same time finishers of the Ford Go Further half marathon, with great attendance and the participation of Dean Karnazes, received a special t-shirt with the design of Voidokilia.

The event innovated for yet another year alongside Samsung, official technology partner. During the running routes, participants had the chance to try the next-gen Galaxy Fit, tracking live their fitness stats, like cardiac pulse and timing in just one touch without missing a moment from their performance.

Meanwhile, Samsung assisted in achieving the zero footprint of the event, contributing to a paperless registration with the use of the innovatory Galaxy Tab S6.

During the event, Samsung created a special Samsung Βusiness Lounge providing participants of Navarino Challenge with endless entertainment, while informing them on the ultimate business solution of the company, the Samsung Dex. Participants also got to know the powerhouses of smartphones Galaxy Note10 | Note 10+, enjoyed the unparalleled picture of Samsung QLED 8K TV, the cinematic experience of Samsung 4K Smart QLED TV, the use of the QLED Gaming Monitor and browsed the multiple functions of the interactive Flip monitor. 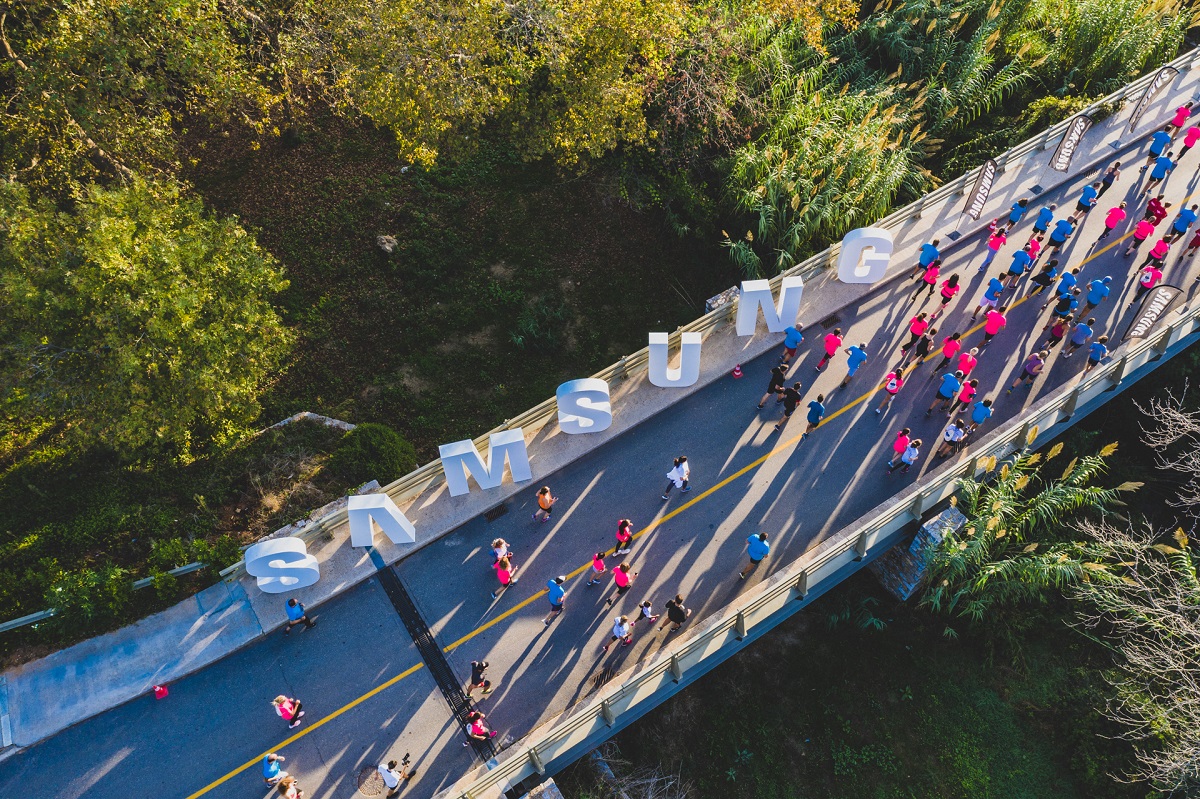 A special surprise from Samsung awaited participants of Navarino Challenge, with the exceptional artwork of artist Nathan Makris, that depicted top athletes, Nick Galis, Spiros Gianniotis, Alexandros Nikolaidis, Grigoris Polychronidis, Periklis Iakovakis and Dean Karnazes. Visitors had the opportunity to take a picture with them and post their photos on social media. 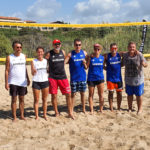 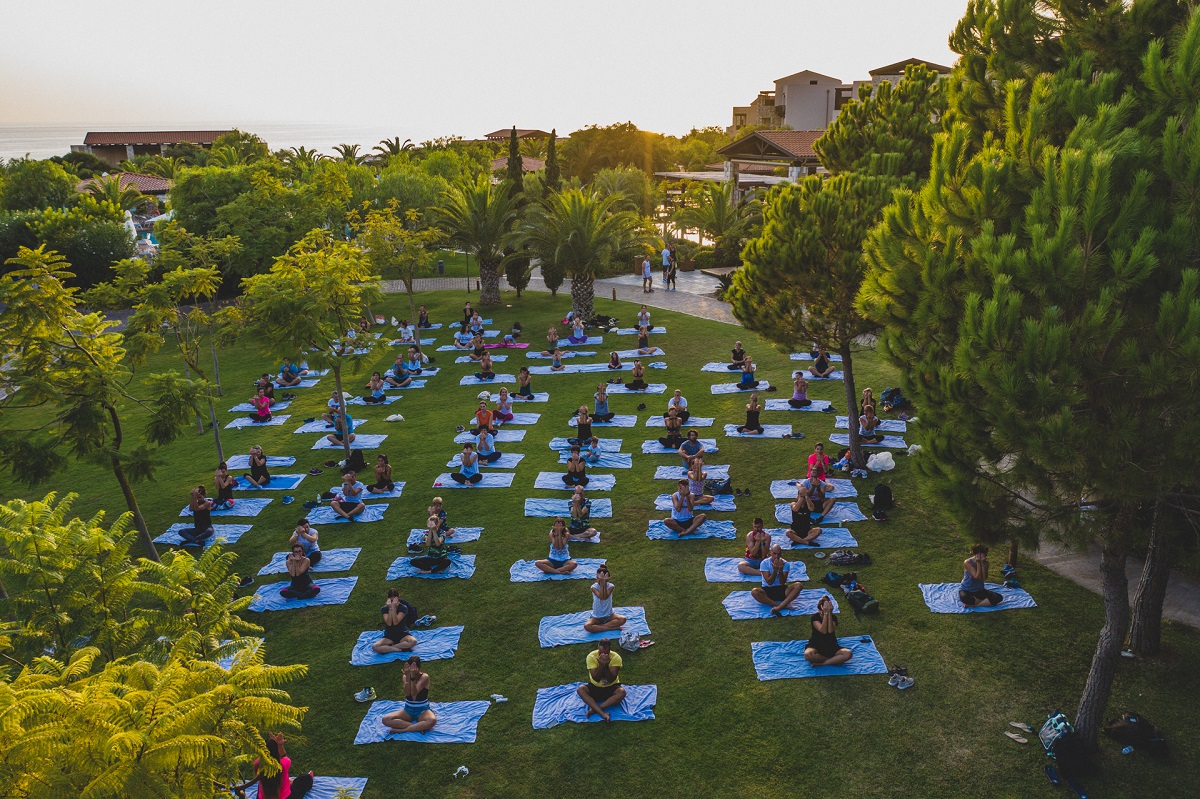 Pilates by the instructor Mandy Persaki (photo by Mike Tsolis)

Ford Motor Hellas promoted sports and “fair play” as the event’s official sponsor and supported the efforts of the fight against childhood obesity while promoting healthy diet by participating for another year in the support team of Navarino Challenge. For the sixth consecutive year, athletes and organizers moved with the safety and efficient engines of the cars of Ford Motor Hellas, while the brand-new Ford Ranger Raptor was present too in Navarino Challenge 2019!

More than 250 people worked in the event’s production in less than 50 hours. 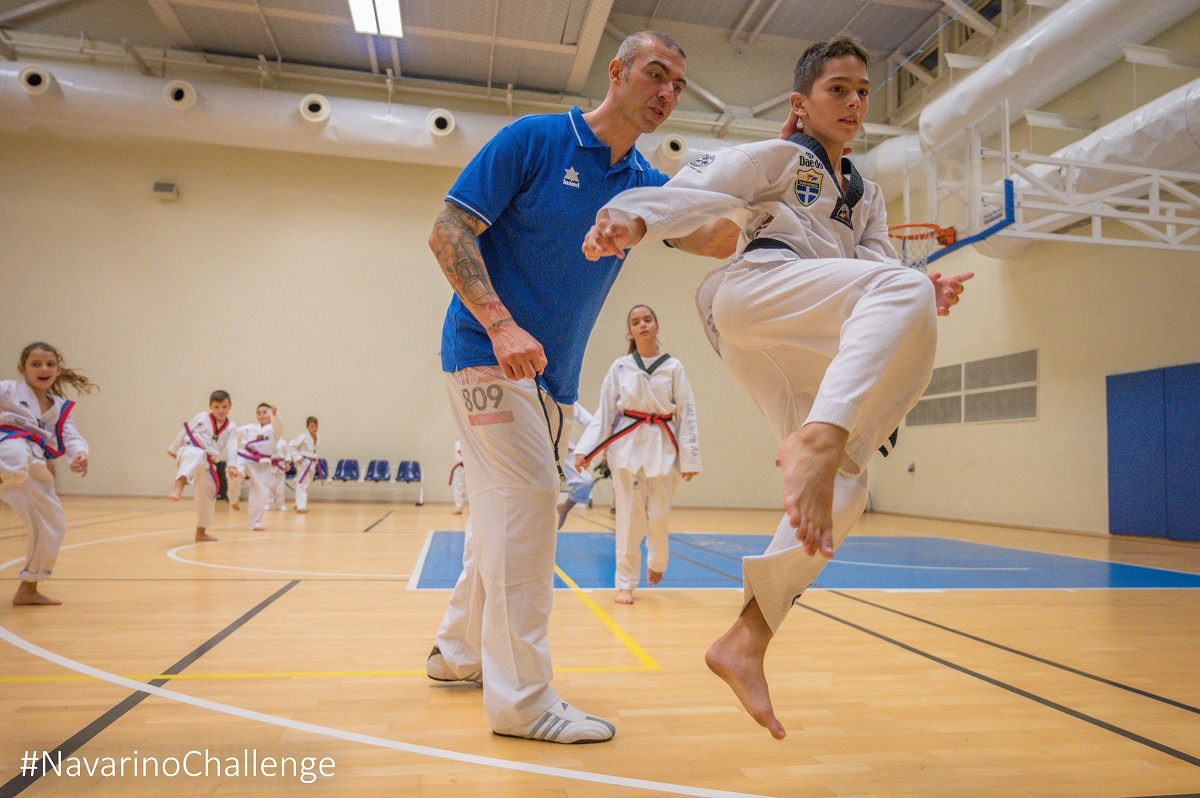 Qatar Airways was the official airline.

Samsung was the official technology partner for another year. Official sponsors of the event were Ford Motor Hellas and the Natural Mineral Water “Vikos”.

Luanvi was the official sports supplier of the event for one more year.

Nutramins was the official health supporter of the event.

Official supporters were Poseidonia, PlantBox, PHEE and Municipality of Pylos-Nestor.

Avance Rent A Car was the official rental partner.

National Geographic was the strategic partner of the event and 24MEDIA its premium media partner.

All event’s equipment transfers were made with Pilia Express. 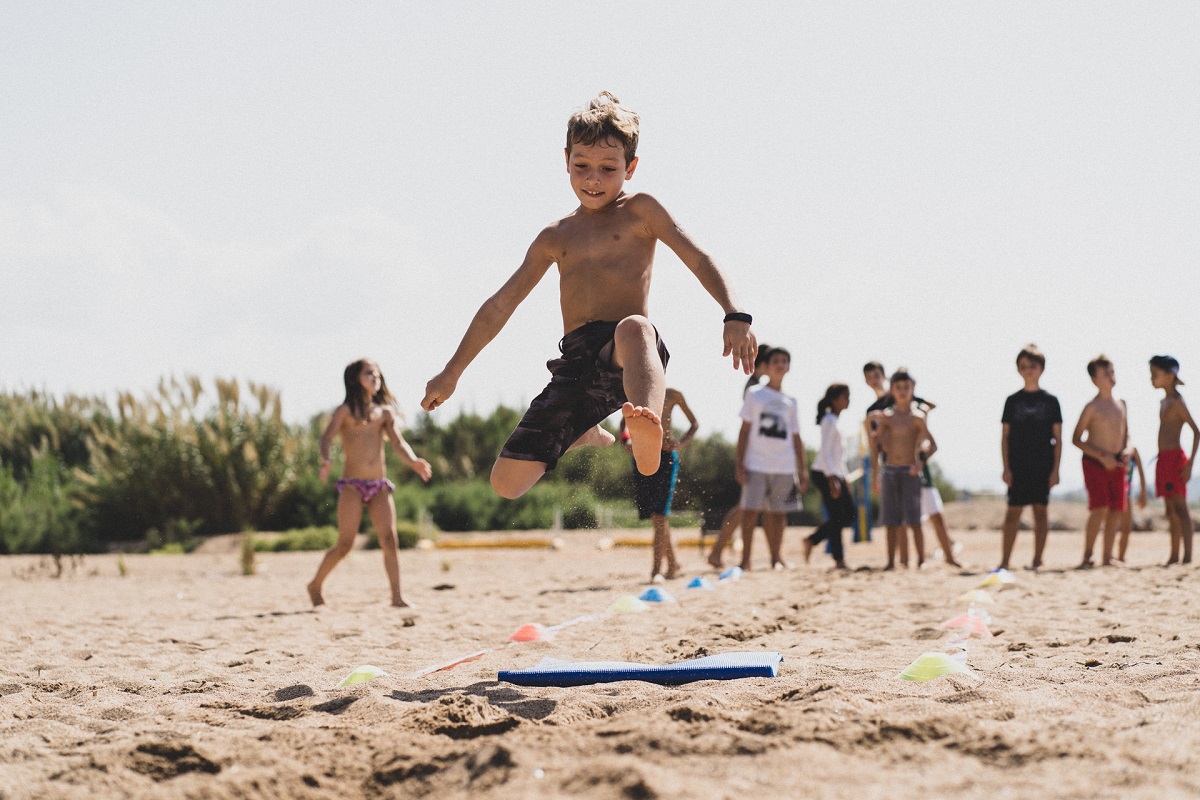 “Navarino Challenge” supports: a) the Institute of Preventive Medicine, Environmental and Occupational Health, Prolepsis with a program on Food Aid and Promotion of Healthy Nutrition, DIATROFI, and through the Captain Vasilis and Carmen Konstantakopoulos Foundation: b) WWF Greece and c) Karkinaki, through the GivenGain online platform: https://bit.ly/33KTNhD 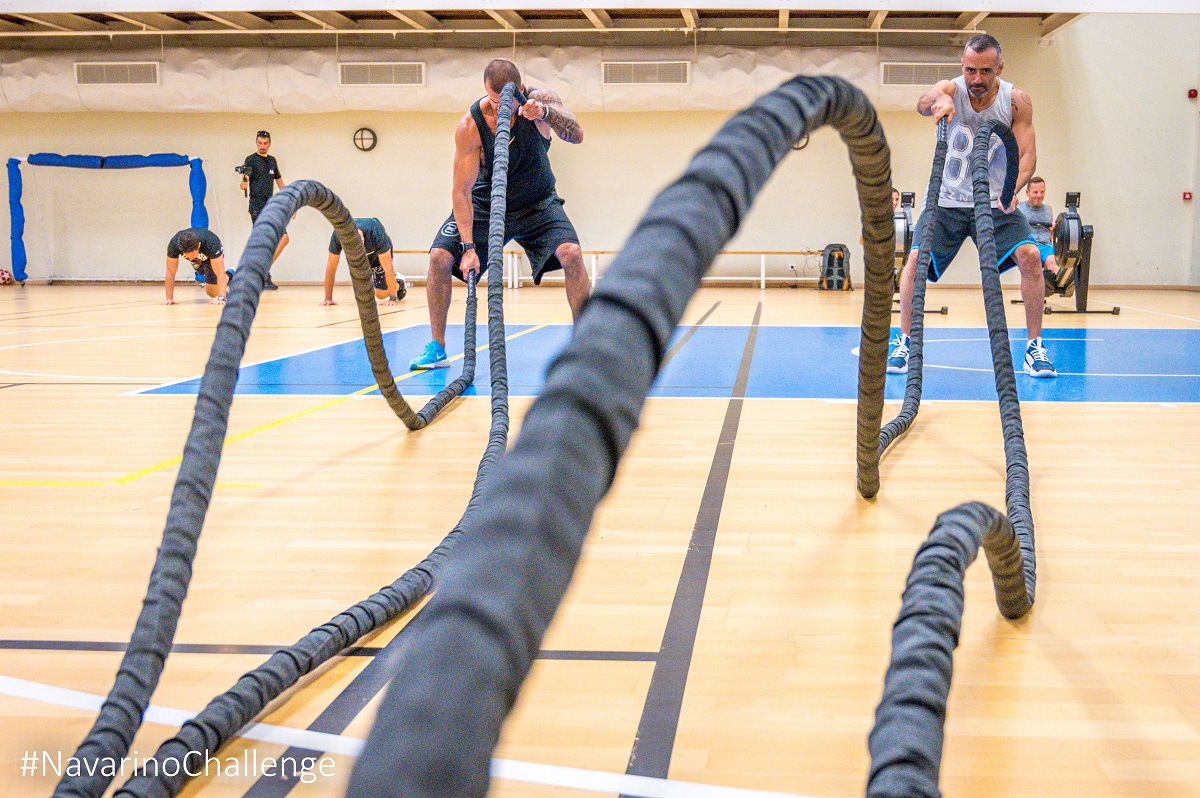 “Navarino Challenge” joined the Greek actions of the #BeactiveHellas 2019 programme of the European Commission and was held under the auspices of the General Secretariat of Sports.

The event was held under the auspices of the Greek National Tourism Organization with the approval of the Hellenic Swimming Federation.

Navarino Challenge was co-organized by Costa Navarino, The Westin Resort Costa Navarino and Active Media Group with the support of the Municipalities of Pylos-Nestor and Trifilia.