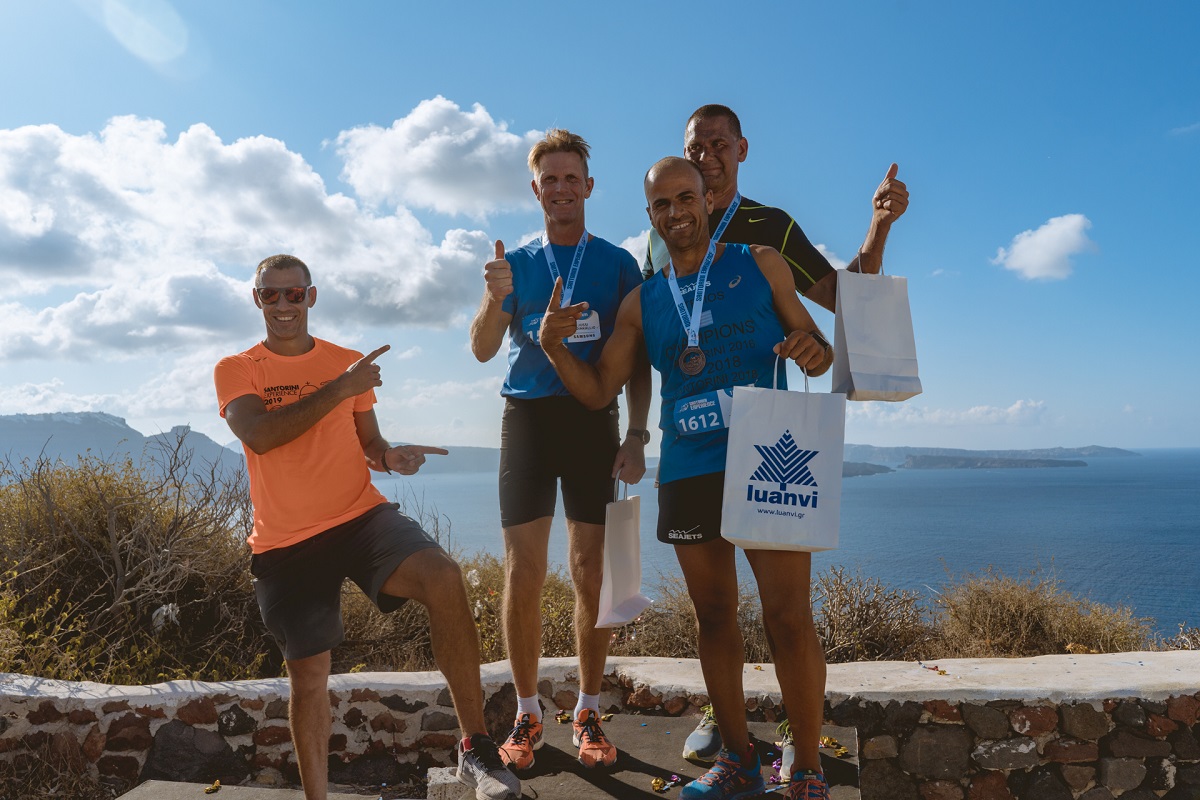 Amateur and professional athletes from all over the world, from October 4-6, traveled to the Greek island of Santorini, to participate in the Santorini Experience sports tourism event, which combines the island’s stunning locations with trail running and open water swimming.

The top sports tourism event in Greece, was successfully completed with a record of participations from 49 different countries, with visitors staying in Santorini for at least 5 nights.

Participations from 49 countries in Santorini! 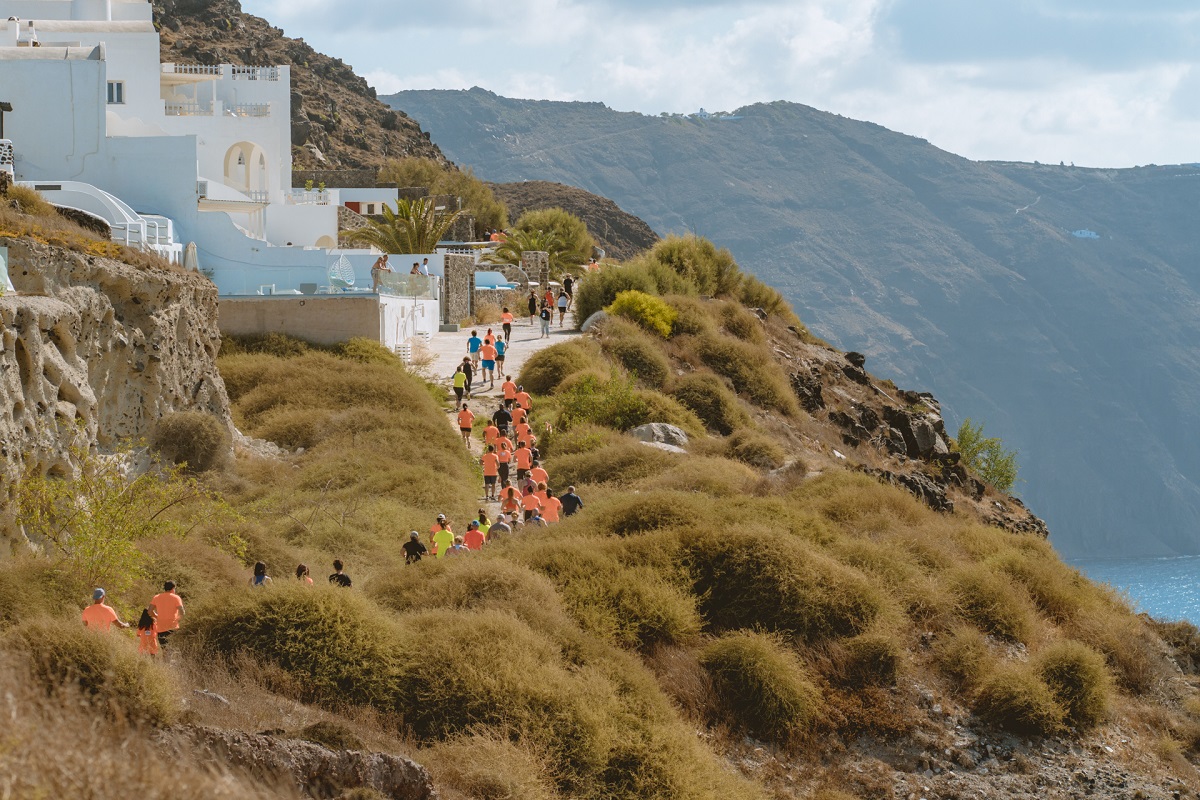 Minister of Tourism, Mr. Harry Theocharis preceded the event, saying: “I wish from the bottom of my heart, to all those visiting Santorini, either as competitors to run and swim, or as friends who wish to watch them, to feel the uniqueness of this island and this experience; something which is very rare for anyone to be able to experience. Good luck to all. I wish this very significant tourism destination for our country, such as Santorini, to continue offering such unique experiences to every traveler who visits the island”.

The return of Spyros Gianniotis and the participation of the elite of the Greek National Open Water Swimming Team! 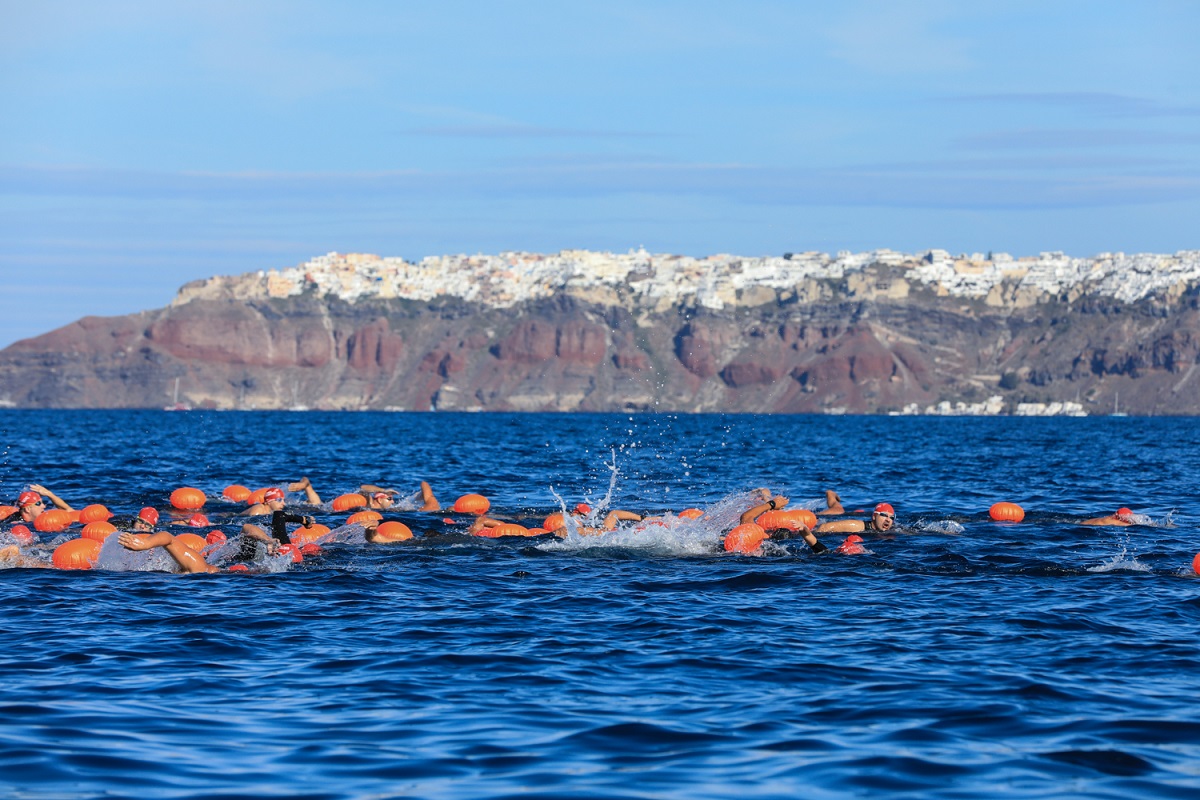 On Sunday 06/10, swimmers felt the eruptive atmosphere of the volcano. Participants swam the 1.5 miles (2.4 km) route from the volcano to the old port of Fira with the imposing view of the island in front of them at the Open Water Swimming by Vikos. The race was held under the technical direction of federal coach and director with Olympic and World championship distinctions, Nikos Gemelos, with the approval of the Hellenic Swimming Federation, following the FINA regulations, the approval of the Hellenic Coast Guard of Santorini and the permission of Cyclades Regional Tourism Service of Ministry of Tourism.

Men’s winner was Japanese Olympic champion Yasunari Hirai, George Arniakos finished 2nd and Dimitris Manios in the 3rd place. In women, World champion Kelly Araouzou was 1st, Stellina Aplanti finished 2nd and Irene Diakoumakou came 3rd. You can see the detailed results on the official page of the event (in the event there was an extra classification for those wearing wetsuits – wetsuit category): https://cutt.ly/8euV5sW

The absolute safety of the race was ensured with the contribution of the Boatmen Union Santorini, which transported the athletes to the volcano and contributed to the smooth running of the open water swimming, the 100 specialized escorts in the water, mainly assisted by Lifeguard Patrol and several lifeguard boats beyond its staff, Voluntary Lifeguards of Santorini, Atlantis Dive Center, Santorini Nautical Club, Santorini Yacht Cruises and Caldera Yachting, all with more than 30 boats next to the athletes! Organization provided swimmers with a high-quality safety lifeguard buoy. In fact, Olympic champion Spyros Gianniotis set the example by swimming with a lifeguard buoy. The event joined the Global Swim Series (GSS) [numbering more than 150 swimming races]. 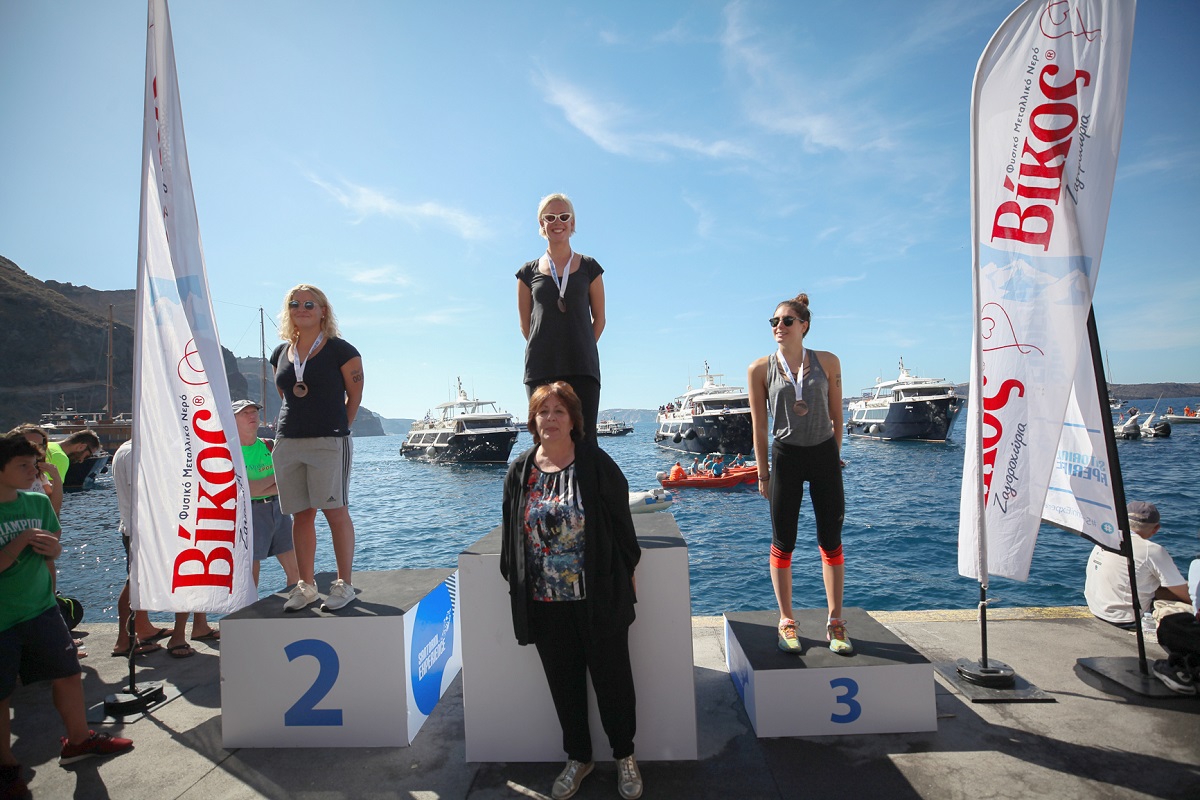 On Saturday 05/10, the 15km by Samsung, 10km and 5km “Aristides Alafouzos” races were held. Runners had the opportunity to enjoy the three established routes on the Caldera, overlooking the enchanting images of the volcano and the background scenery of Imerovigli, Firostefani and Oia. Specifically, the 5km “Aristides Alafouzos” route concerned the running and dynamic walking, the 10km was addressed to the most experienced in distances and the 15km route by Samsung to those who love strength, endurance and adrenaline. All routes started from the desalination plant in Oia, including parts of trail track, and finished in Oia. The running routes are designed by the former marathon runner, Greek classic route record holder, running trainer and director of All About Running, Nikos Polias. 5km and 10km running races were co-organized with AS Ifestos Thiras and EAS SEGAS Cyclades Region with the approval of the Hellenic Athletics Federation [SEGAS]. “Santorini Experience” was part of the global community of World’s Marathons [numbering more than 4.391 running races worldwide]. In the following link you can see the running results: https://cutt.ly/8euV5sW that were held in the  safest way.  Characteristically within 7.5 kilometers, there were 40 rescuers and lifeguards with first aid experience! 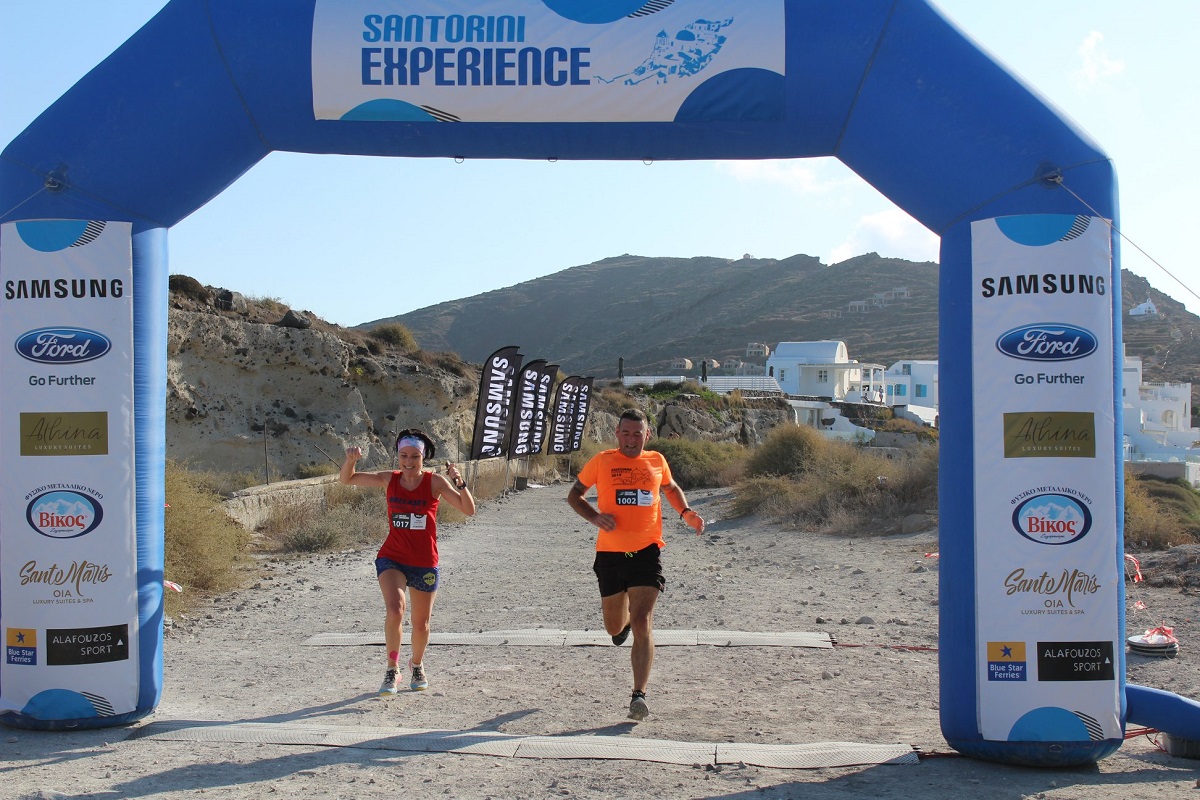 With the contribution of the Municipality of Santorini and Municipal Sports Cultural Environmental Organization of Santorini (DAPPOS) the event ensured the cleaning of the path that connects Oia with Fira.

The event received a very substantial support and assistance from its official sponsors Athina Luxury Suites, and Alafouzos Sport store where registrations were held throughout the weekend.

On Friday 4/10, the awarded Santo Maris Oia Luxury Suites & Spa as the official sponsor of Santorini Experience gave the opportunity to people to admire the enchanting view of the famous sunset in Oia, by hosting a Sunset Pilates Session with the exceptional instructor, Mandy Persaki under the Cycladic setting harmony, providing smoothies to its guests.

Real Madrid Foundation Clinics for the first time in Santorini!

In the framework of Santorini Experience, and in cooperation with MGC Soccer Central, head coaches from the academies of Real Madrid visited Santorini for the first time and specifically the facilities of the athletic center Playland, from October 3-6, 2019 and taught football to 100 children aged between 6 and 16, using the coaching methodologies of Los Merengues! 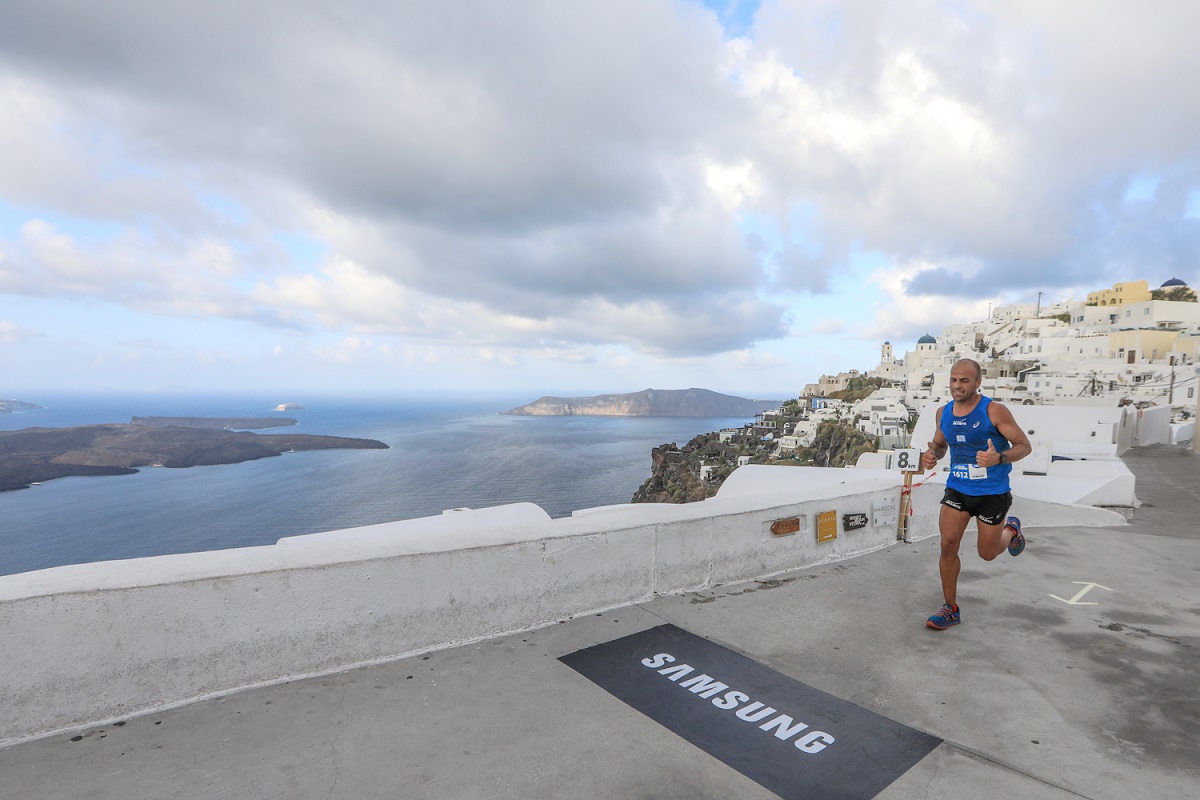 The event innovated for yet another year with the official technology partner, Samsung. During the race, runners had the opportunity to try out the latest Fit-e technology and measure the calories they burned, their heart rate and of course their time. At the same time, Samsung helped achieving a zero footprint of the event by contributing to the paperless registration with its devices.

Ford Motor Hellas promoted sports and “fair play” by participating for the 5th year in the support team of Santorini Experience. Athletes and organizers moved with the safety and efficiency of Ford Motor Hellas cars, the official sponsor of the event.

For another year Vikos SA as an official sponsor spread the message of sporting energy with the natural mineral water “Vikos”, offering the necessary hydration and revitalization to all participants. The natural mineral water “Vikos” offered the necessary balance, well-being and energy that the athletes needed during their exercise in order to be able to continue their effort. 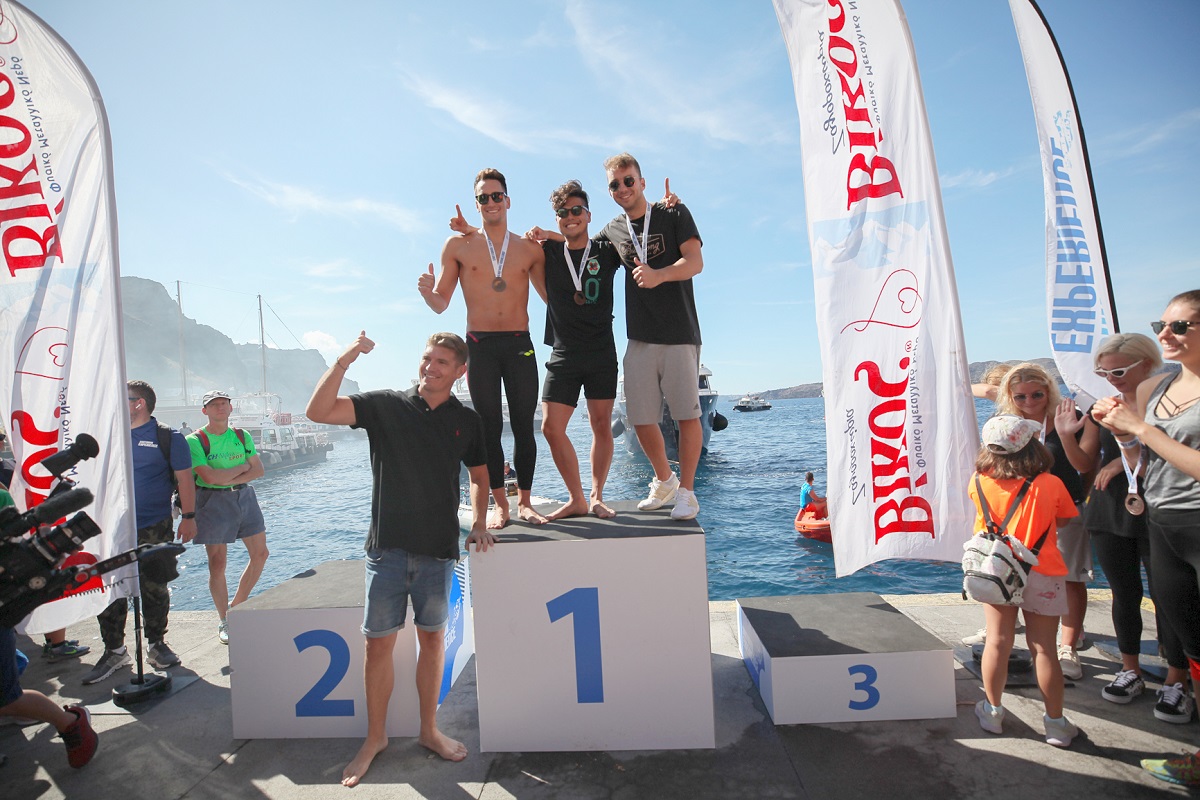 Santorini Experience ensured once again the best service for all participants, creating ideal conditions for all travelers. All those who travelled to the island by ferry for the 5th Santorini Experience, were able to enjoy the safety and comfort of the event’s official sponsor, Blue Star Ferries, with offers and discounts applied also on the connection with the Cyclades and Dodecanese group of islands.

For another year, Luanvi was the official sports supplier. The leading company in the sportswear industry in Spain, offered the event’s special technical T-shirt to all participants. The event’s collectible t-shirt featuring elements and symbols of the island and race is now available at Alafouzos Sport store. The t-shirt was perhaps the most beloved souvenir of all.

Avance Rent A Car was the event’s official rental partner helping transportation in the Cycladic island with special discounts and its dynamic fleet of cars.

On was the event’s official shoe partner for the first time.

During Santorini Experience, participants had the opportunity to try and buy the top Swiss shoe On, the event’s official shoe partner, which is the ideal trail running shoe on the demanding routes of the event renowned for its design and its technology.

National Geographic was the event’s strategic partner and 24MEDIA its premium media partner.

DNA Travel, as the official transport partner of the event, facilitated the transportation of all participants and volunteers of Santorini Experience. 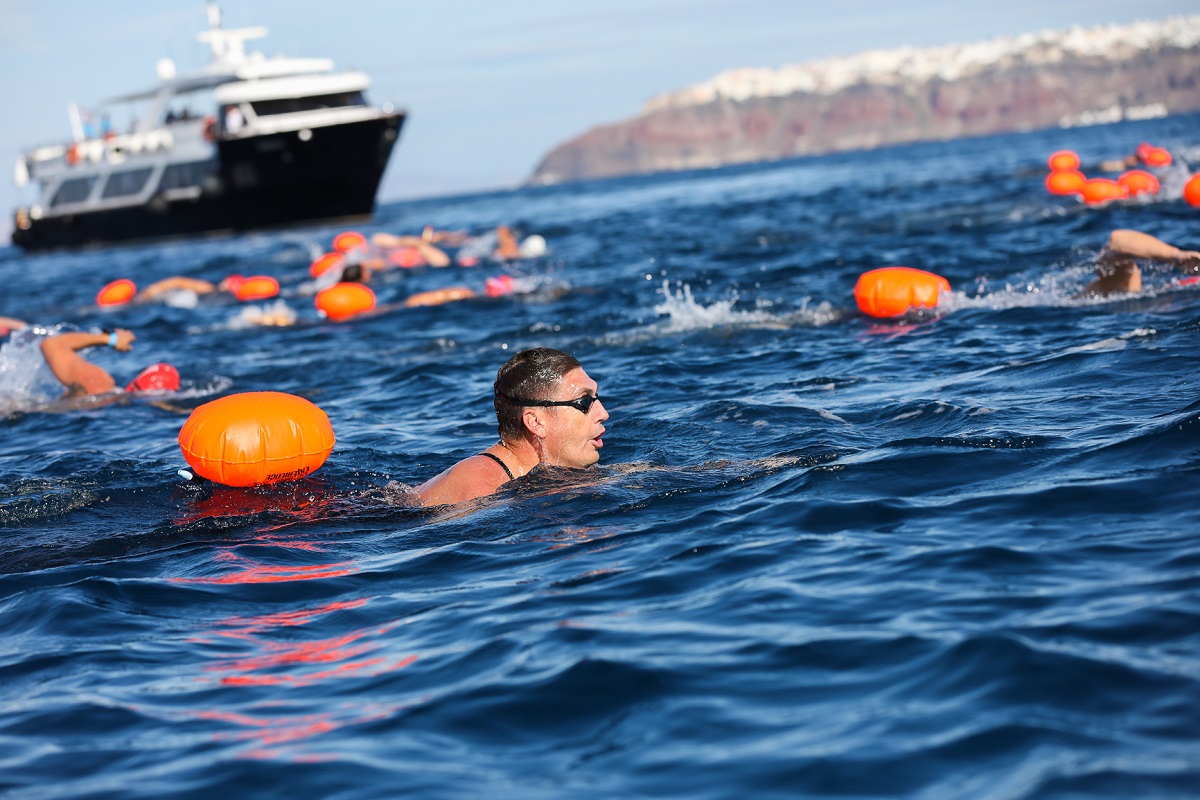 Another element to the event’s success was the association of all the major hoteliers of the island for the actualization of Santorini Experience. 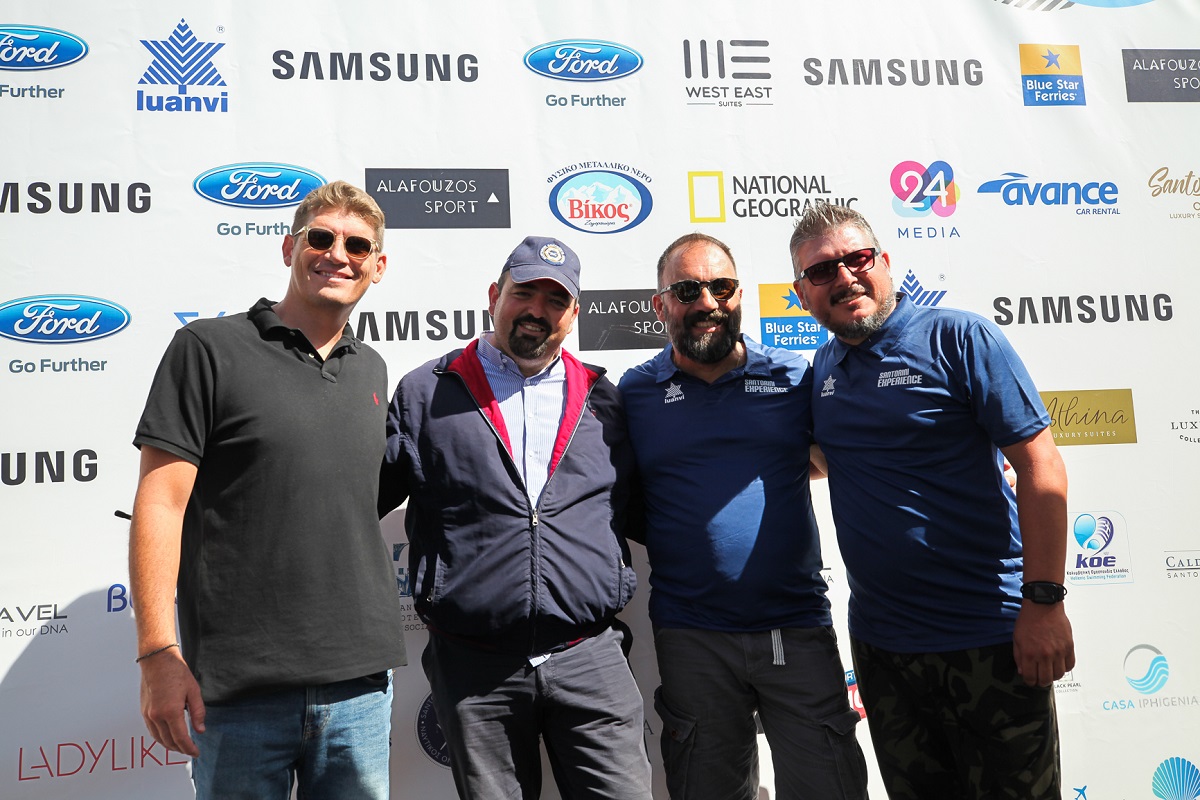 The dynamic team of volunteers contributed to the smooth implementation of the running and swimming races.

Santorini Experience joined the Greek actions of the #BeactiveHellas 2019 program of the European Commission and was under the auspices of the General Secretariat of Sports.

The event was held under the auspices of the Greek National Tourism Organization with the approval of the Hellenic Swimming Federation.