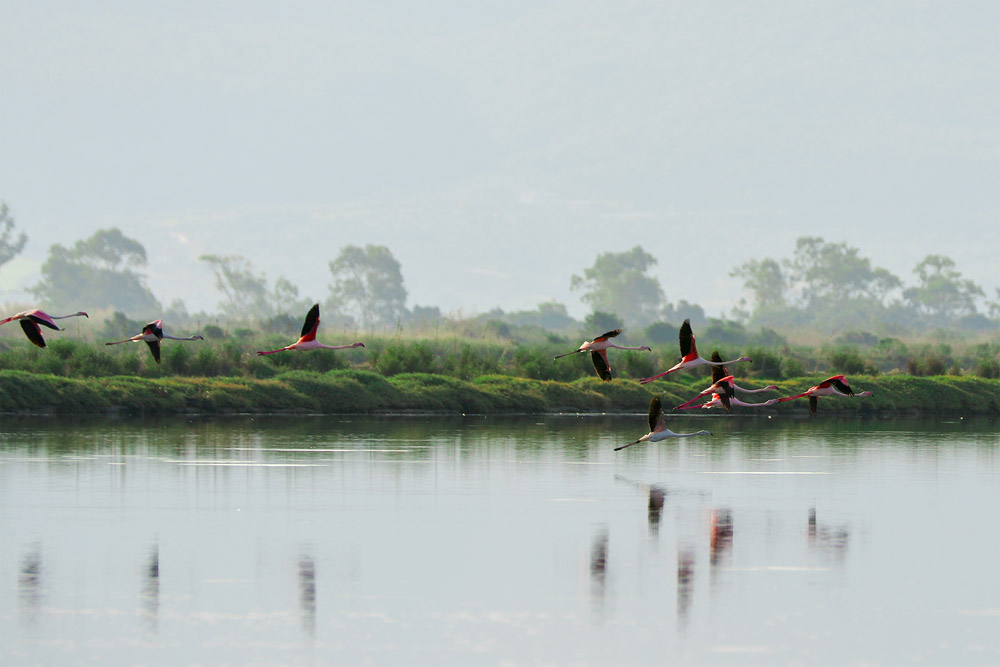 Aiming to become the first sustainable sports tourism event in Greece, Navarino Challenge recently presented its strategy for 2019, which focuses on the environment and efforts to leave the smallest possible footprint.

Navarino Challenge will be held in Messinia and Costa Navarino for the 7th consecutive year during 11-13 October 2019.

The press conference for the top sports tourism event, was held at the Stavros Niarchos Foundation Cultural Center, with the presence of representatives from the Ministry of Culture and Sports, the Ministry of Tourism, the US Ambassador to Greece Mr. Geoffrey R. Pyatt, silver Olympic medalist in open water swimming Spyros Gianniotis and the Greek-American ultramarathon runner, Dean Karnazes, who is participating for the 7th consecutive year in the event as its ambassador in Greece and abroad. 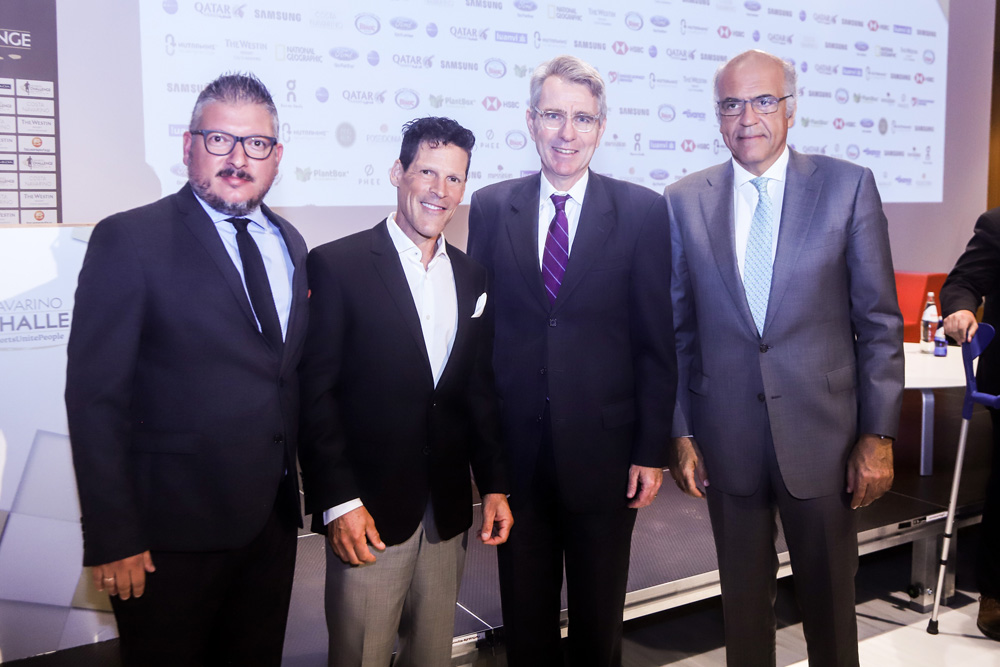 Deputy Minister of Culture and Sports, Mr. Lefteris Avgenakis stated, through the director of his office Ms. Marianna Delkou: “I congratulate you on all your work that brings to light the natural beauty of our country, preserves the cultural heritage of Greece, cultivates environmental awareness and healthy nutrition by creating a valuable entirety of health and wellness based on the Olympic values of culture, the spirit and body, the pursuit of excellence and the admiration of beauty”.

On behalf of the Ministry of Tourism, Special Advisor Ms. Eleni Tzelepoglou stated: “Ministry of Tourism embraces the effort of Navarino Challenge, in the context of our strategy to develop the Greek tourism product through sports and improve its quality and sustainability. Especially in this case, with a tone of diversity and national identity offered by Greek geography as well as the leading Greek athletes with international prominence participating in the event. To the extent that this effort follows the purpose of the Olympic movement and is within the Olympic spirit: “Sports Unite People”. We are proud that this year’s Navarino Challenge will be promoted internationally through the International Travel & Tourism Awards presented by the World Travel Market in the “wellness” category. We congratulate everyone who contributed to this success and we are on the side of this event”. 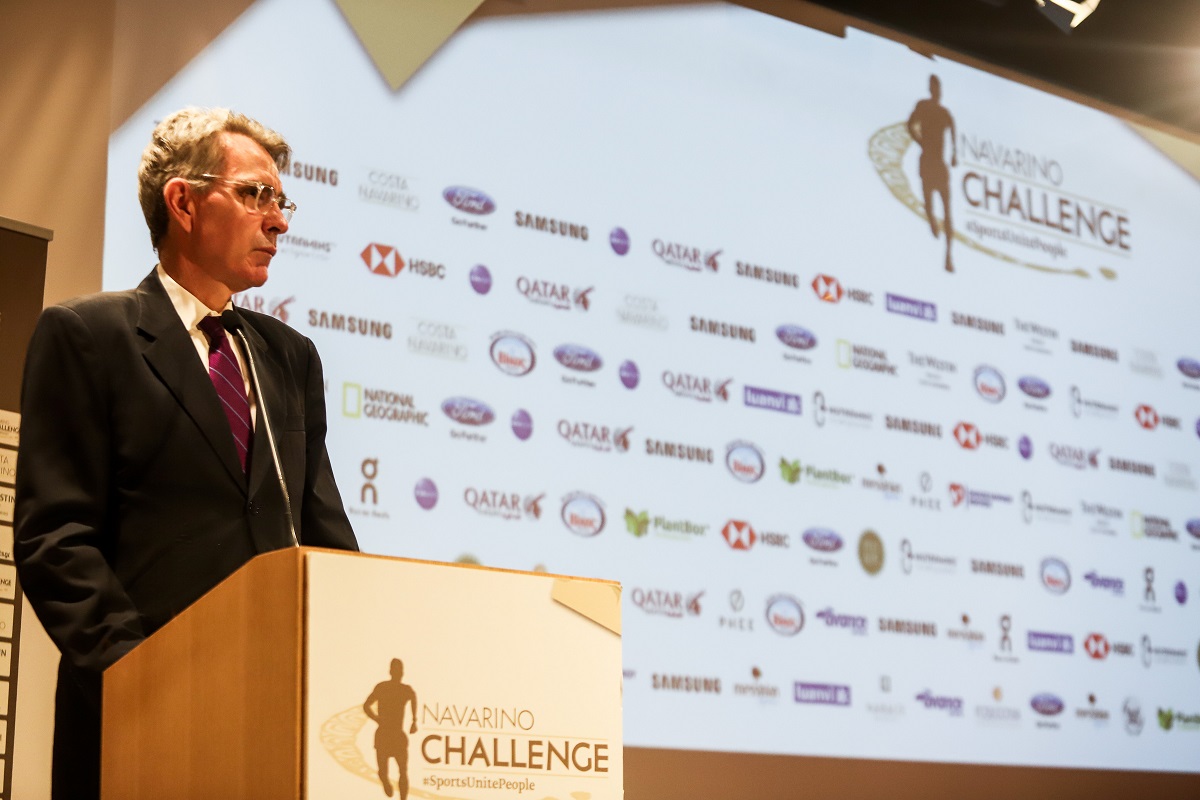 US Ambassador to Greece Mr. Geoffrey R. Pyatt highlighted afterwards: “First of all, let me say what a pleasure it is to have my friend Dean Karnazes back here, someone who is a great ambassador for the U.S.-Greece relationship and especially our important diaspora. This event, the Navarino Challenge, has many connections to the United States, starting with its location at Costa Navarino, a Marriott Westin resort, which has been an innovator in finding ways to grow the Greek tourism season. I also want to say just a few words about my friend Dean. He is a world-renowned American athlete, who is also very proud of his Greek identity and family roots. And like his colleague Nick Galis, he’s somebody who has very much demonstrated the power of the Greek American diaspora to reinforce the bilateral relationship that I am here to build. Have not done the Navarino Challenge but I consider myself lucky over the past three years to have discovered a lot of the sports potential of this country. But I want to underline that we are hoping to see much more U.S. investment and involvement in the Greek tourism sector. Of course, Costa Navarino has been at the forefront in this effort to grow Greek tourism, to do so in a sustainable way that’s respectful of Greek culture and leverages all the fantastic aspects of this country. So I wish good luck to all the athletes and a successful competition again this year.”

Consequently, Active Media Group Chief Executive Officer, Mr. Akis Tsolis said: “Seeing all of our hard work being rewarded, through this year’s entries and awards in Greece and abroad, we sought to move one step further in order to make Navarino Challenge, the first event of its kind in Greece that will highlight all the values ​​of sustainability. As a part of this year’s event we attempt to leave a positive impact by creating a sport event characterized by sustainability. Navarino Challenge is an innovative Greek brand that has become Global. It is, therefore, our obligation to change, evolve and become better by paving the way for sports tourism”.

Shortly after, Managing Director of TEMES, Mr. Stefanos Theodorides highlighted: “Navarino Challenge returns in a few weeks to Messinia and Costa Navarino, for the 7th year, with great resonance and the warm support of the local community. The success of Navarino Challenge, which is established as one of the most important sports tourism events in our country, is a result of the convergence of all – private initiative, local and state bodies – demonstrating the important role this industry can play in tourism development and in attracting new audiences”. 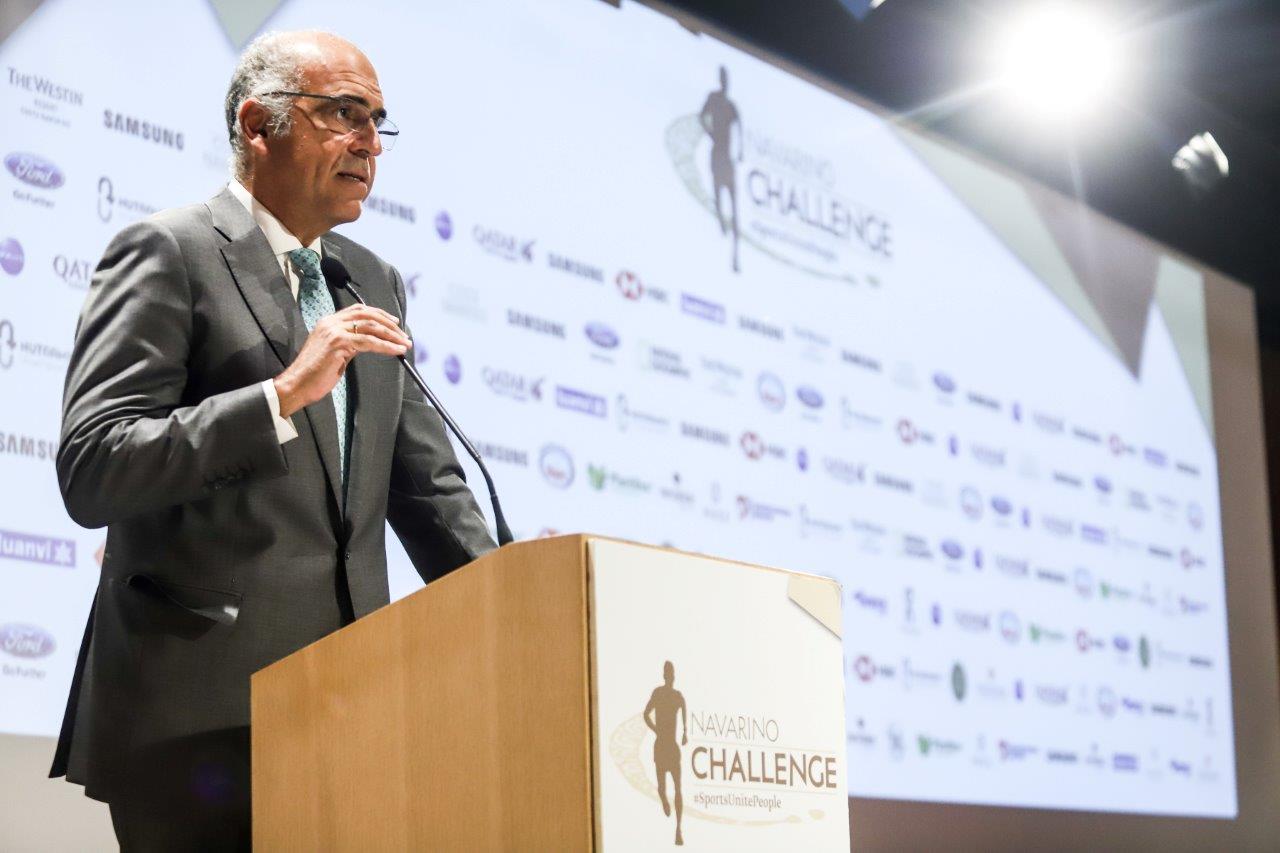 Consequently, the ultramarathon Dean Karnazes highlighted: “Any of you that have been to Navarino Challenge and experienced it, I think that’s the best thing that I could say. It is really a magical event and I do events across the world. It’s world-class and innovative in every single way. Sports tourism is the future of Greece I believe. There is no place like Greece for running and it is the birthplace of running. In seven years of visiting Greece, I felt more enthusiasm than this year ever before”.

On behalf of the athletes, silver Olympic medalist in open water swimming, Spyros Gianniotis, remarked: “Navarino Challenge remains since its very beginning a beautiful event. The feeling you get from participating in it is unique, such as running in the sand of Voidokilia and swimming in Pylos, in an outstanding landscape. It is the best advertisement for our country”.

Finally, Qatar Airways Sales Manager Greece, Mr. Alexandros Michalopoulos, highlighted: “Qatar Airways proudly supports a range of exciting international and local initiatives dedicated to enriching the global community that it serves, and for the fifth consecutive year Qatar Airways is the official airline partner of Navarino Challenge, which is a multiple award-winning sports tourism event aiming to raise awareness about the benefits of healthy living, exercise and the Mediterranean diet as well as the issue of childhood obesity through its numerous sports activities. Qatar Airways, the official FIFA partner, is the official sponsor of many top-level sporting events, including the FIFA 2022 World Cup, reflecting the values of sports as a means of bringing people together, something at the core of the airline’s own brand message – Going Places Together”. 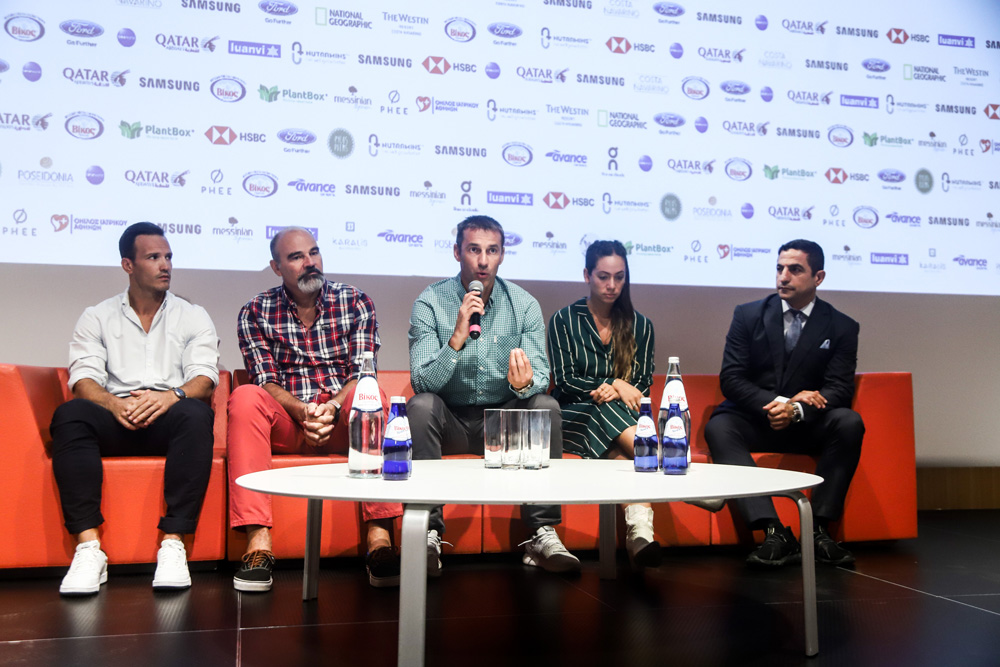 Hellenic Rowing Federation President and Olympic Preparation President in the Hellenic Olympic Committee (HOC), Mr. Ioannis Karras, as well as Mr. Makis Asimakopoulos general coordinator of the Athens Authentic Marathon that initiated its cooperation with Navarino Challenge earlier this year, were also present among other official partners of the event.

The event innovates with a new technical t-shirt!

As the official sports supplier of Navarino Challenge, LUANVI, the leading force in the field of sports apparel offers once again the official t-shirt of the event. A special technical t-shirt for the participants, that as of last year contains elements from Messinia to enhance the feeling of remembering and unforgettable experience in order to highlight the cultural elements of the area. With this criterion in mind, the ancient symbol rodax or rodakas, found also during the Byzantine period whilst dominating Messinian life in ancient Greece, will appear on the t-shirt this year. At the same time half marathon finishers will receive a special t-shirt with Voidokilia. 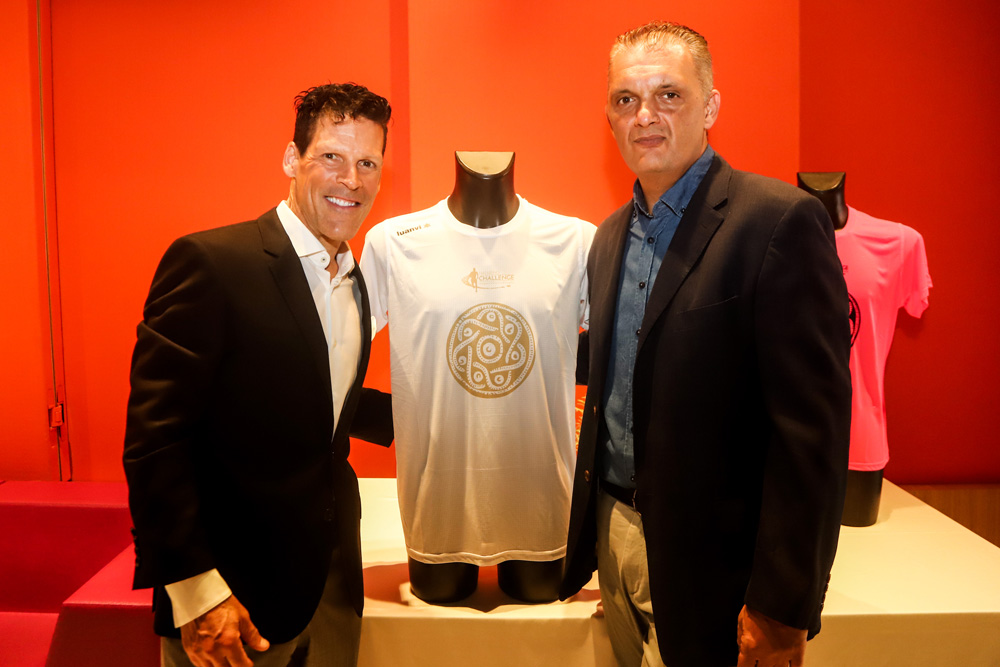 Seaweed medal for the participants!

The event continues to innovate and brings new surprises. This year’s participants will receive a medal made only of seaweed from the event’s official supporter, PHEE, a company that innovates by promoting the principles of “green” entrepreneurship and the reuse of natural resources.

ON company, the event’s official shoe partner, via Panellinios Agora Games didn’t choose Navarino Challenge by chance. With a clear orientation on sustainability, the industry leading Swiss company aims to create the first sustainable running shoe in the world.

Watch the following video and enjoy some moments from the top Ford Go Further Half Marathon:

Navarino Challenge will cooperate for the second time with HSBC, one of the world’s largest banking and financial services organizations. As an official banking partner, HSBC will support this year’s event and will be the exclusive sponsor of the bike activity (Bike ride at Voidokilia by HSBC) by promoting the message “Together we thrive!”.

Participants at the 7th Navarino Challenge will have the opportunity to enjoy special discounts from sponsors and discount partners of the event during their stay at The Westin Resort Costa Navarino. To view current offers, click here.

For more information on the detailed event program, click here.

More information on accommodation packages can be found here.

Registrations continue for running and swimming

Entries for the award-winning sporting event are underway and interested parties can take part by completing the special form available here. Pre-sale is also available online via www.viva.gr or by phone at 11876 as well as at all Viva pre-sale points. 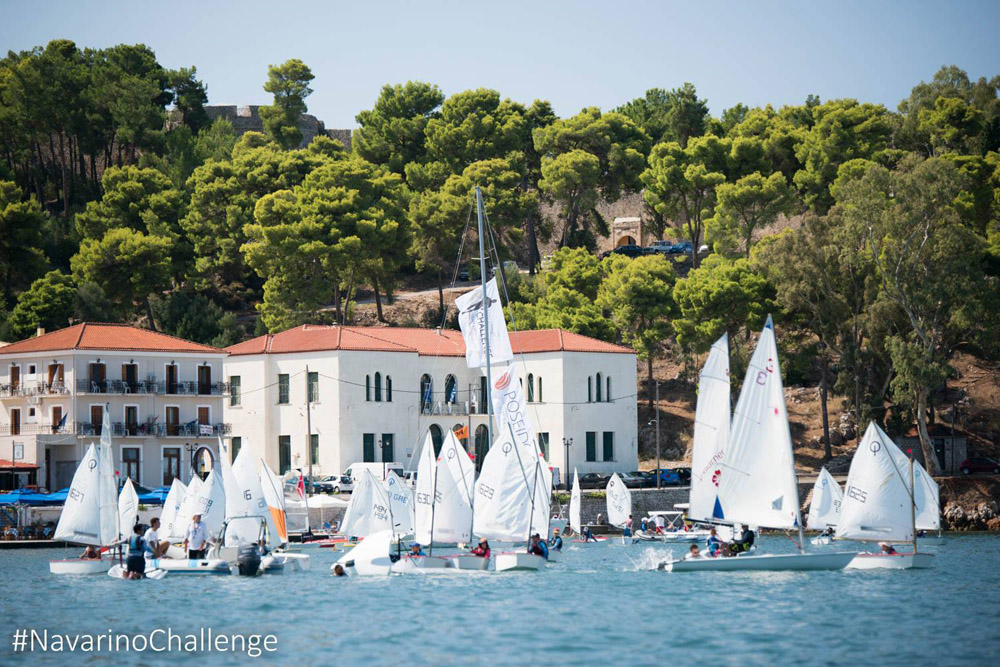 Qatar Airways is the official airline.

Samsung is the official technology partner for another year. Official sponsors of the event are Ford Motor Hellas and the Natural Mineral Water “Vikos”.

Luanvi is the official sports supplier of the event for one more year.

Nutramins is the official health supporter of the event.

Official supporters are Poseidonia, PlantBox, PHEE and Municipality of Pylos-Nestor.

Avance Rent A Car is the official rental partner.

National Geographic is the strategic partner of the event and 24MEDIA its premium media partner.

All event’s equipment transfers will be made with Pilia Express. 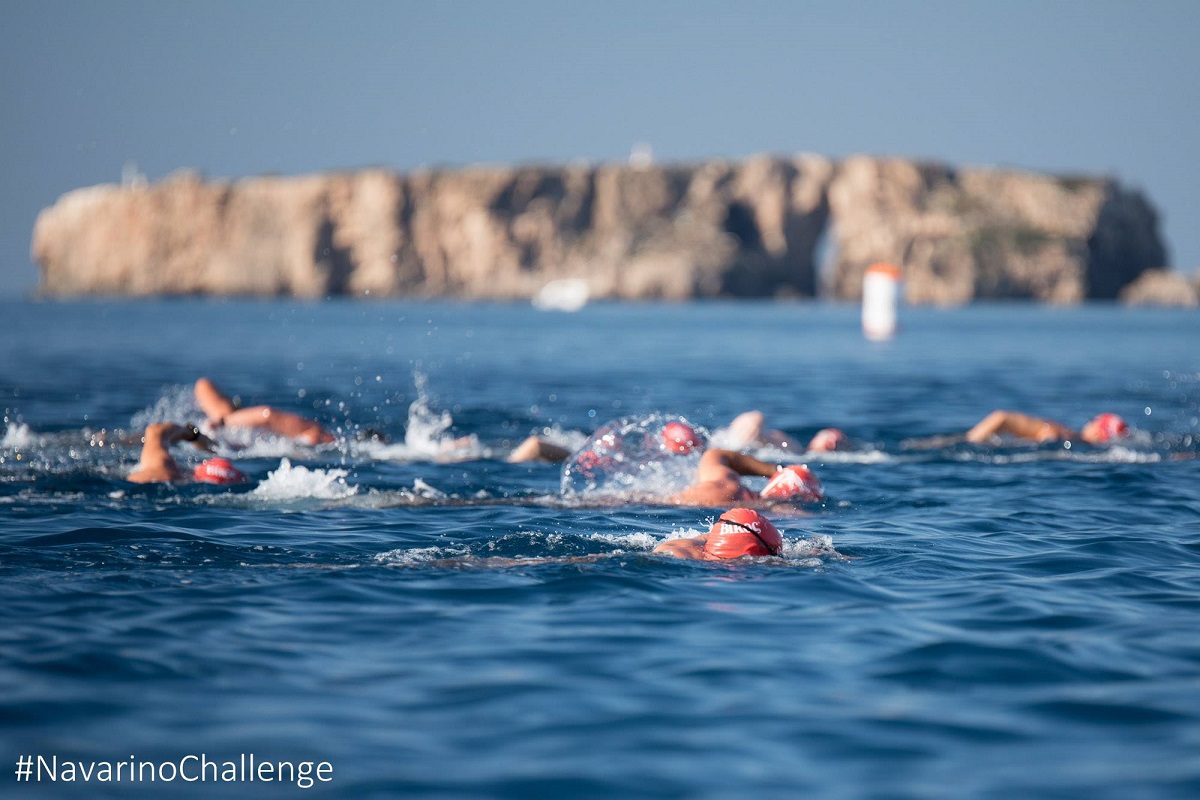 “Navarino Challenge” supports: a) the Institute of Preventive Medicine, Environmental and Occupational Health, Prolepsis with a program on Food Aid and Promotion of Healthy Nutrition, DIATROFI, and through the Captain Vasilis and Carmen Konstantakopoulos Foundation: b) WWF Greece and c) Karkinaki, through the GivenGain online platform: https://bit.ly/33KTNhD

As part of this year’s “Navarino Challenge”, Barney Spender and Roddy Gibson’s award-winning documentary “The Road to Sparta” that recounts the effort of four runners, including that of Greek-American ultramarathon Dean Karnazes (who participated with the Navarino Challenge Support Team) to run the “Sparthathlon” race, will be screened at the Agora, Costa Navarino, on Friday, October 11. The documentary will also have a charitable cause, in order to honor the recent loss of Barney Spender’s wife from cancer.

“Navarino Challenge” has joined the Greek actions of the #BeactiveHellas 2019 program of the European Commission and is held under the auspices of the General Secretariat of Sports.

The event is held under the auspices of the Greek National Tourism Organization with the approval of the Hellenic Swimming Federation.

Coastal rowing relay race and demonstration is held under the auspices of the Hellenic Rowing Federation, while all running races are co-organized with Messiniakos Gymnastic Club, EAS SEGAS Peloponnese Region and the approval of the Hellenic Athletics Federation [SEGAS].

Navarino Challenge is co-organized by Costa Navarino, The Westin Resort Costa Navarino and Active Media Group with the support of the Municipalities of Pylos-Nestor and Trifilia. 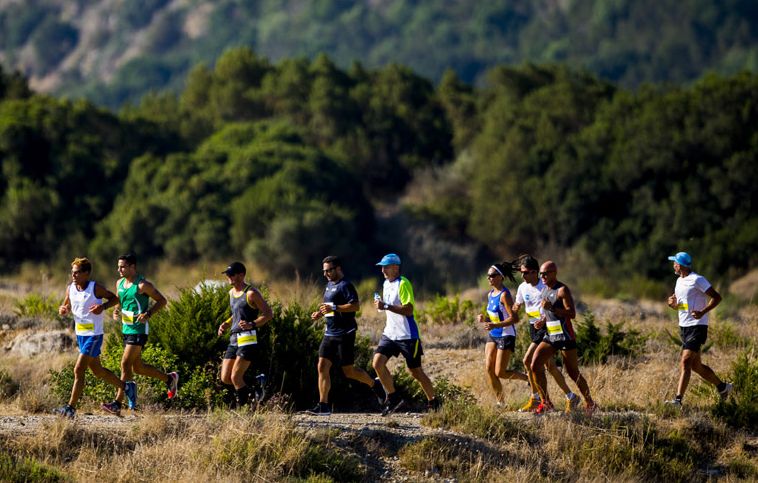 during the Navarino Challenge 2015 at Costa Navarino on September 13, 2015 in Romanos, Greece. (Photograph by Vladimir Rys)