The ongoing disruption to transportation to and from the island of Samothrace at the peak of the tourism season after two ferries serving the island broke down earlier this month leaving dozens stranded has spurred the reaction of hoteliers, who are urgently calling for the upgrade of infrastructure citing lost revenue due to cancellations.

The Hellenic Federation of Hoteliers (POX) is demanding that the government take immediate action claiming it is “a matter of survival” for its members on the island who have suffered losses due to its ongoing isolation and bad publicity. 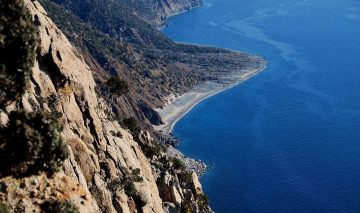 Citing the short tourism season for the remote northern Greek island and the resultant cancellations particularly from the Balkan region, POX is urging government and relevant ministries to reach a permanent and viable solution to Samothrace’s ferry connection with mainland Greece.

Greek Tourism Minister Haris Theocharis is expected to meet with local professionals to explore ways to support the island, following the problems arising from the failing ferry connection.

Ahead of the meeting earlier on Monday, POX proposed the immediate expansion and modernization of the ports, which it said has been delayed for years, speeding up all planned actions in this direction, and increasing the tourist visibility of the destination by tackling negative publicity caused by the inconvenience to this month’s visitors.

According to reports, maintenance and cleaning works at the bottom of the port have not taken place since 1995.

In the meantime, a Seajets catamaran Andros Jet temporarily began three daily routes to the island on August 14 from Alexandroupolis last week. According to the latest update, the Andros Jet will carry out the Alexandroupolis – Samothrace connection on Monday, August 19 and Tuesday, August 20, with three itineraries. For further information, passengers are advised to contact their travel agents.