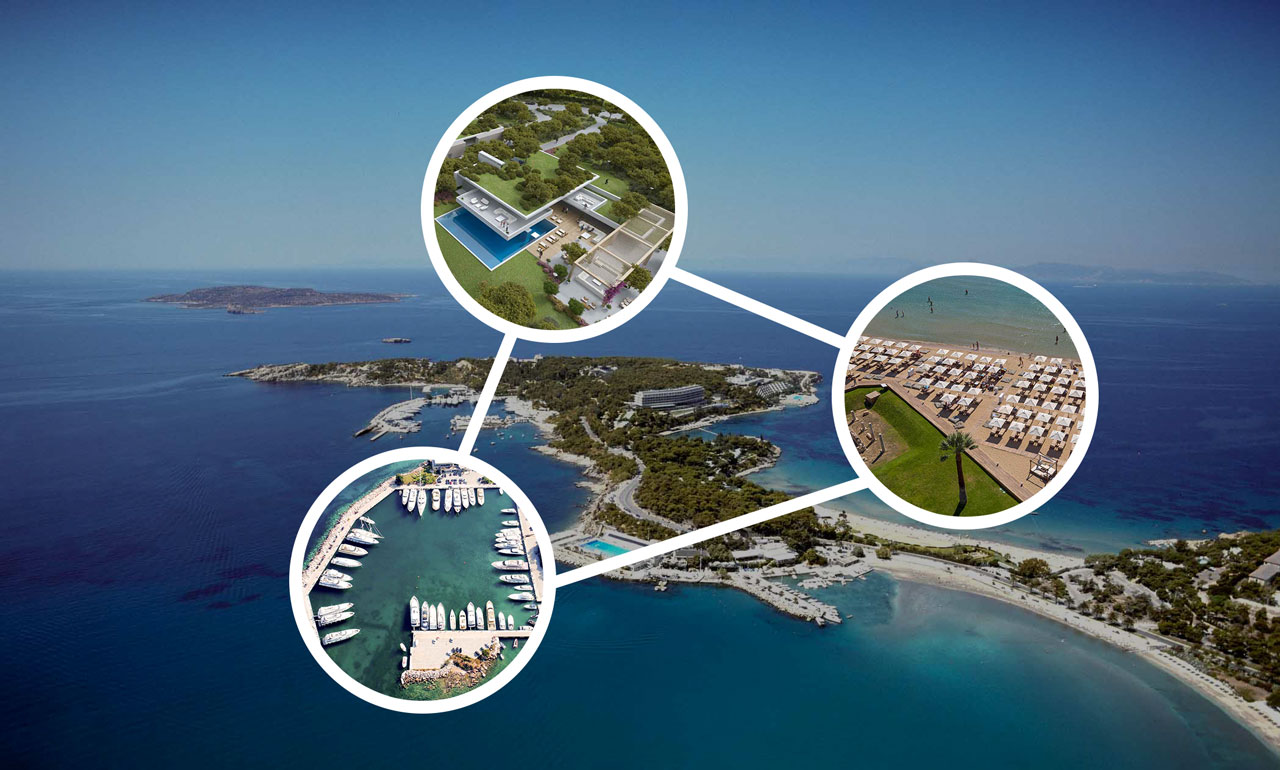 Astir Palace Vouliagmeni S.A. (“Astir”), which recently opened the doors of the first Four Seasons hotel in Greece, expects to wrap up the second phase of its major investment project by the summer of 2020.

A leader in hospitality with a history of over 50 years, the company is currently undergoing a major redevelopment of its portfolio, which includes the re-launch of the legendary Astir Palace hotel in Vouliagmeni as the Four Seasons Astir Palace Hotel Athens.

“A new era for luxury tourism in Greece has launched as the first phase of Astir’s investment plan has been completed with the opening of the Four Seasons Astir Palace Hotel Athens,” Astir Palace CEO Stelios Koutsivitis said on Wednesday. 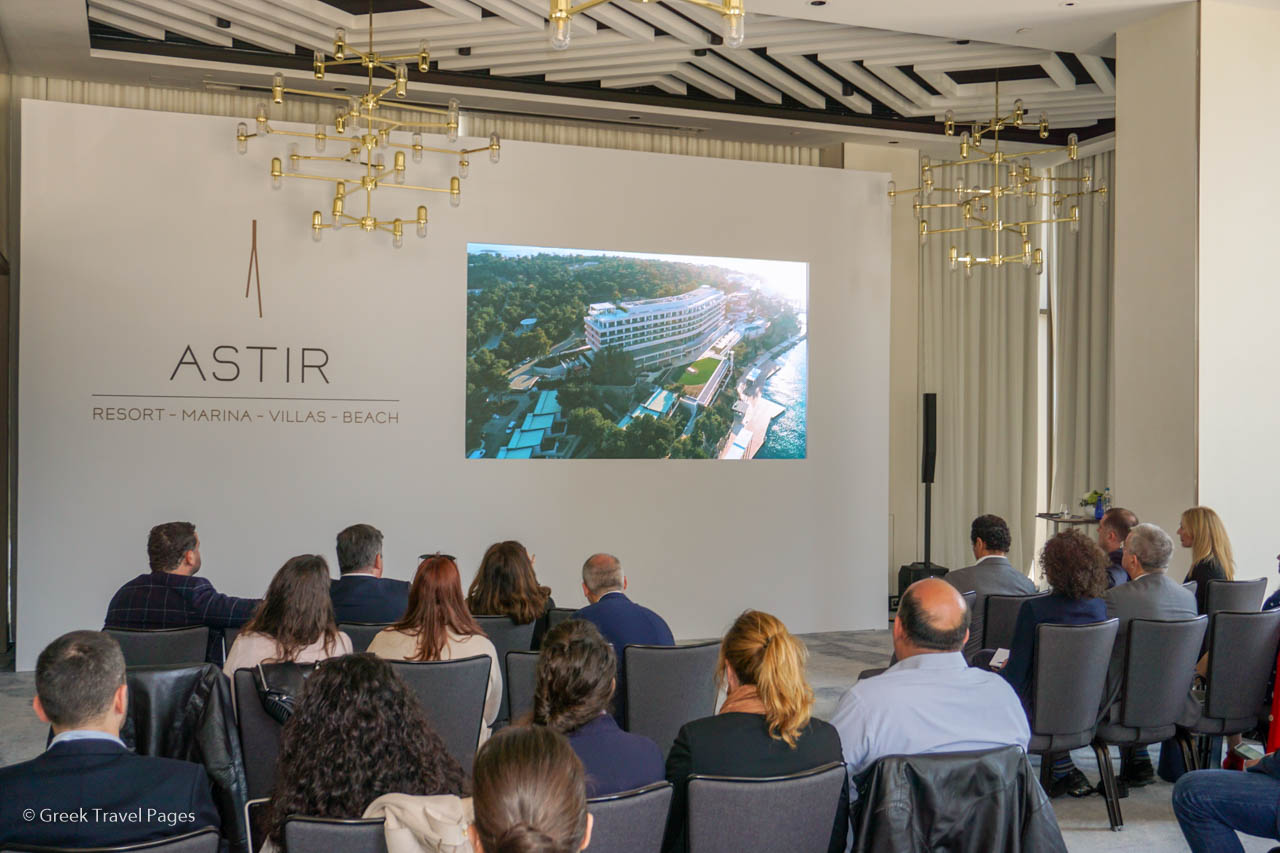 Speaking during a media event, Koutsivitis underlined that Greece’s first hotel under the Four Seasons brand aims to revive the glamour of the original Astir Palace Hotel.

“The Astir Palace has written its own history by advertising the country all over the world. And this is what we want to do all over again,” he said.

Astir’s major investment project expected to surpass 650 million euros – the biggest tourism investment taking place at the moment in Greece – has now entered its second phase, which includes the upgrade of Astir Marina, Astir Beach and the development of up to 13 high-end villas.

According to Koutsivitis, all three projects are expected to be completed by the summer of 2020. 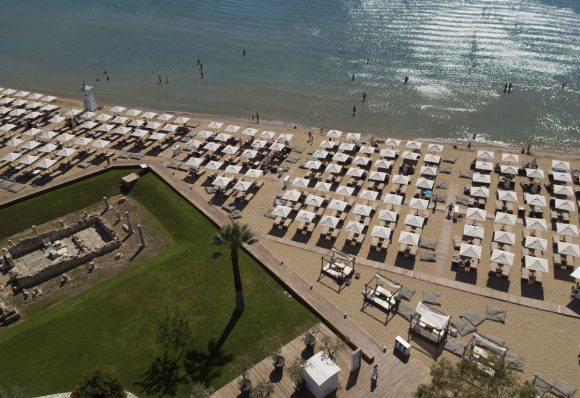 Astir Beach – the meeting point of the Greek and international elite since the 1960s – is currently being developed further, aiming to offer an elevated waterside experience, including water sports, top-notch facilities, exclusive dining and a private members club. 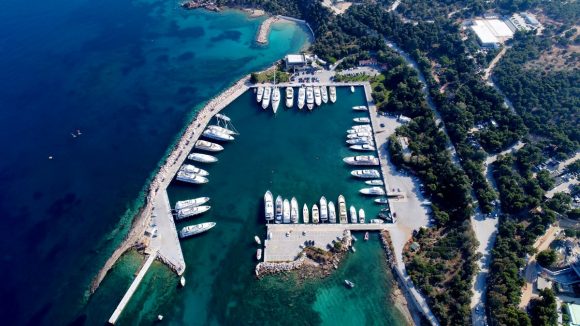 The Astir Marina, which currently features 103 berths, with availability to accommodate vessels up to 55 meters long, is undergoing a redevelopment plan that includes a significant upgrade so as to accommodate larger vessels and state-of-the-art marina facilities.

“The upgrade of the Astir Marina is an additional pillar of our investment plan, aiming for it to be in the position to compete other landmark marinas in the wider Mediterranean region, in terms of infrastructure and services,” Koutsivitis said. 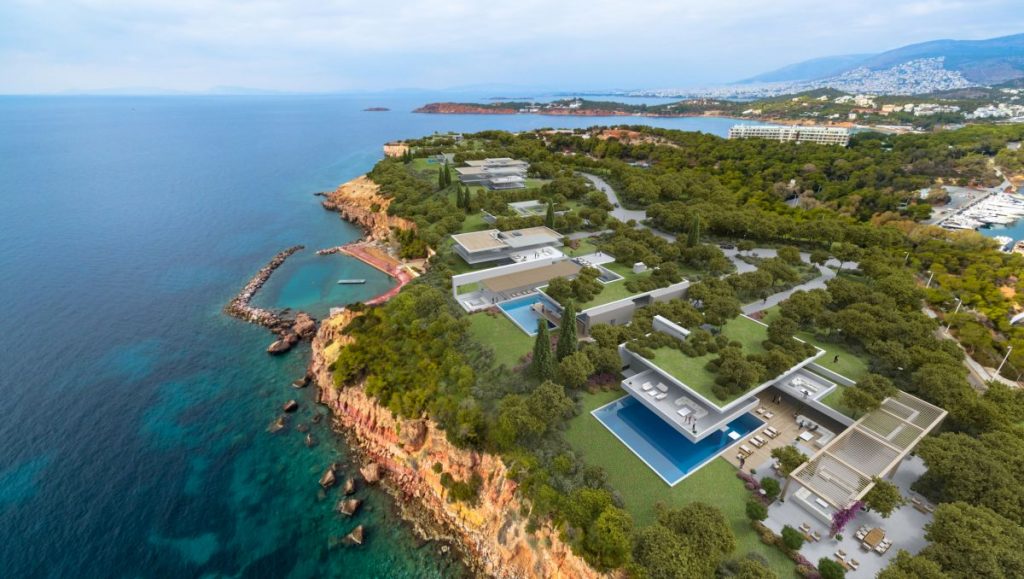 The development of up to 13 luxury private villas (Astir Villas), where the Afroditi unit once stood facing the open sea, will complete Astir’s whole investment project. The private villas, will be built by new owners and based on Astir’s specifications. According to Koutsivitis, a high interest has already been expressed by buyers for the 13 spaces to set up the private villas. At the moment, a few villas have already begun to take form. 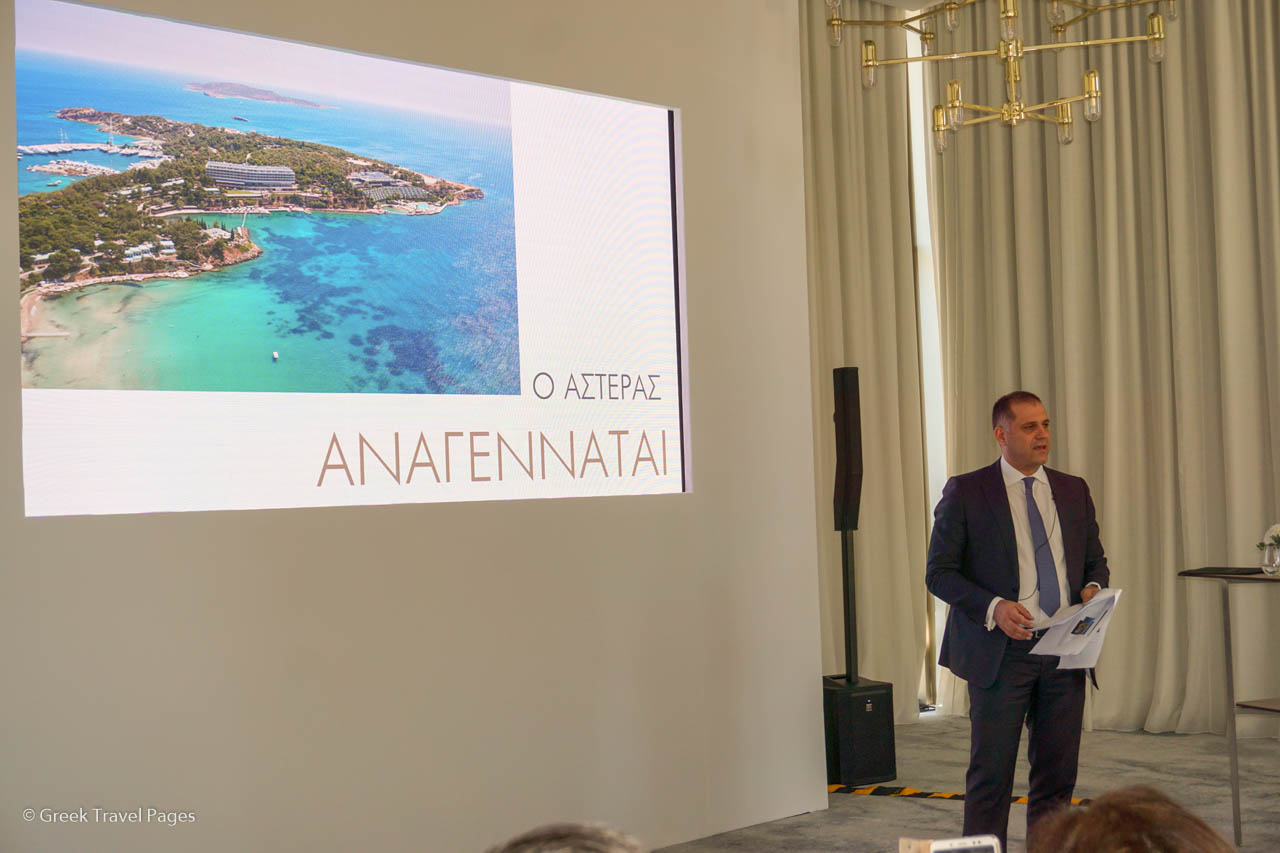 Focusing on the aim to further promote the Athenian Riviera, Koutsivitis said that Astir will be a very important part of its development. 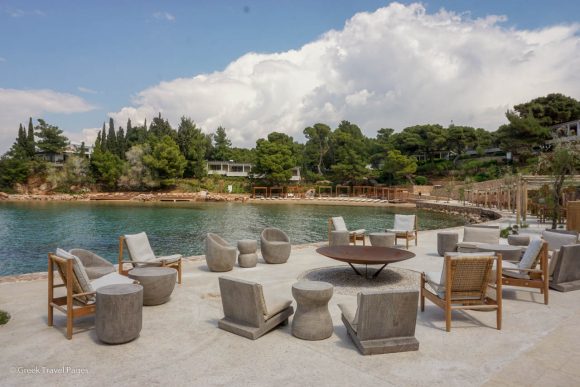 Referring to the importance of the project for the country in general, Koutsivitis referred to a “multidimensional” investment that brings significant benefits to Greece, as it promotes it as an upscale destination through the Four Seasons brand, contributes to economic growth and to the employment of over 700 people.

“This is an investment that can be used as a case study, a selling tool for the country, to convince the international investment community that such large investments – ones with complex licensing framework – can be done in Greece,” he said, noting that the public sector cooperated greatly for the investment to be carried out.

“We believe this to be an emblematic destination because of the legacy that follows this amazing location and this complete hospitality experience. 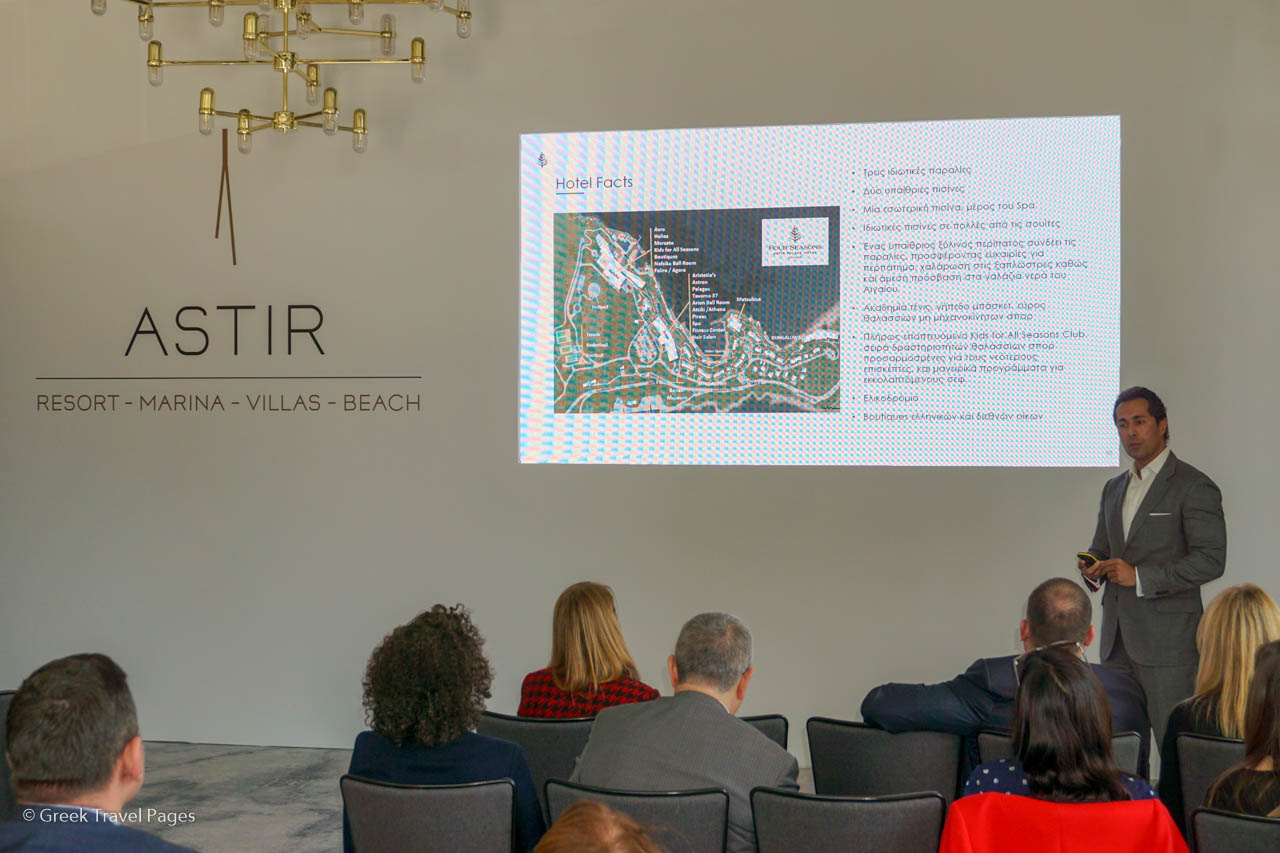 While presenting the facilities of the Four Seasons Astir Palace, the hotel’s general manager, Sam Ioannidis, noted that with 150 hotels worldwide in its portfolio, the Four Seasons had been waiting a very long time to come to Greece.

“The country has always been a very special place for our company and as we open our hotels, we look for destinations that are very special and very unique… We have found this here in one of the finest locations in all of Athens,” Ioannidis said. 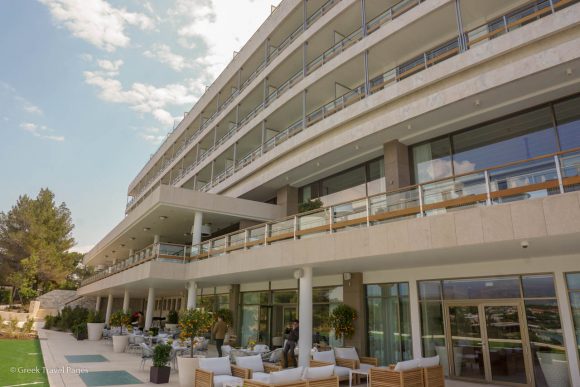 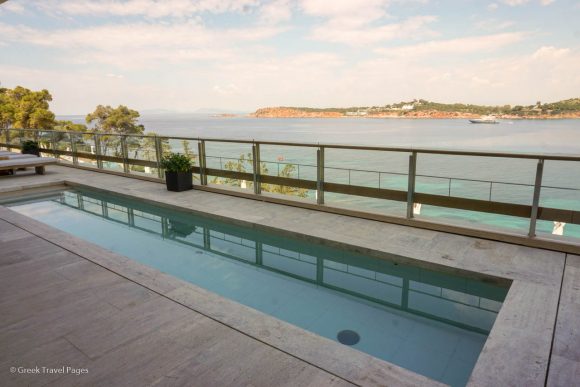 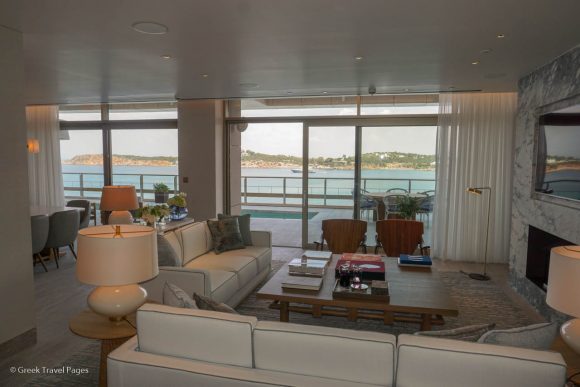 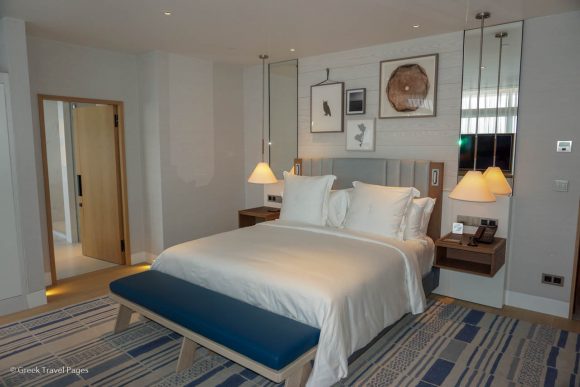 “Our overall goal is to assist to make Greece a world class destination. The country has much to offer in the tourism sector. Last year, the New York Times rated it as the top destination in the world and we want to continue that trend,” he added.

The Four Seasons Astir Palace – which includes the Arion complex, the Nafsika complex and the Astir Palace’s legendary bungalows (which date back to the ’60s) – operates as one resort under the management of Four Seasons. 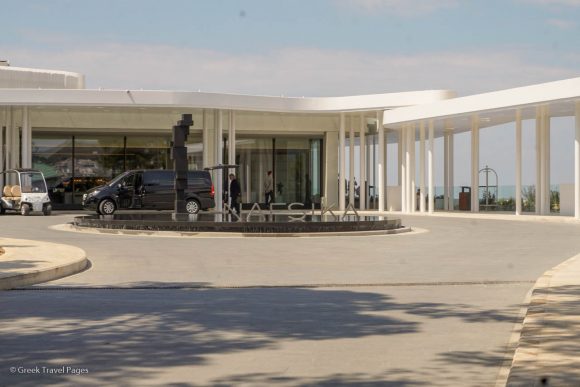 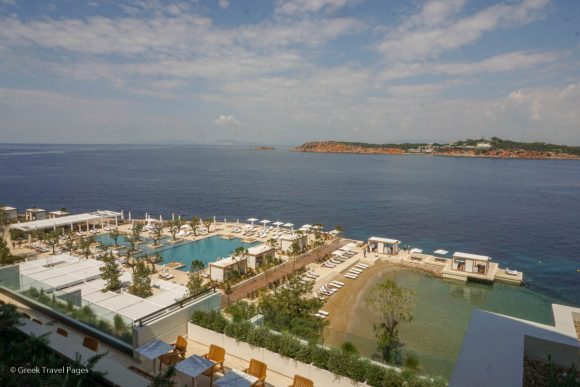 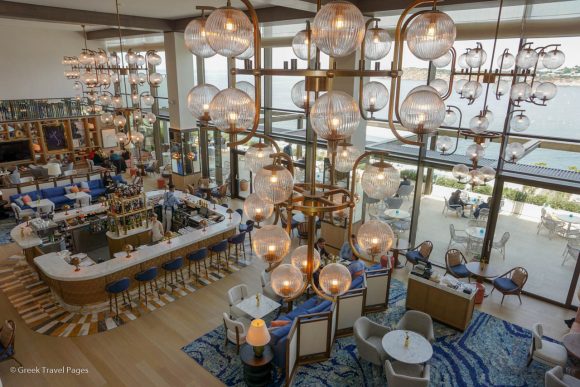 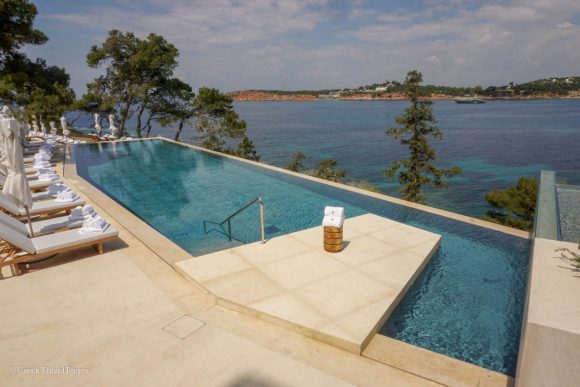 The resort has a total of 303 rooms, suites and bungalows, a high standard spa center, a number of leisure facilities and unique culinary options. It also features high-level conference and event facilities, and a modern heliport is also available for the needs of the most discerning visitors. The resort also offers guests access to the nearby islands.

“We want our guests to explore Athens, but also explore Greece… We want to be the ‘living room’ of Athens and offer our guests and the community a world class experience. We want the community to come and embrace us… For us, everyone is special. Everyone is a VIP,” Ioannidis highlighted. 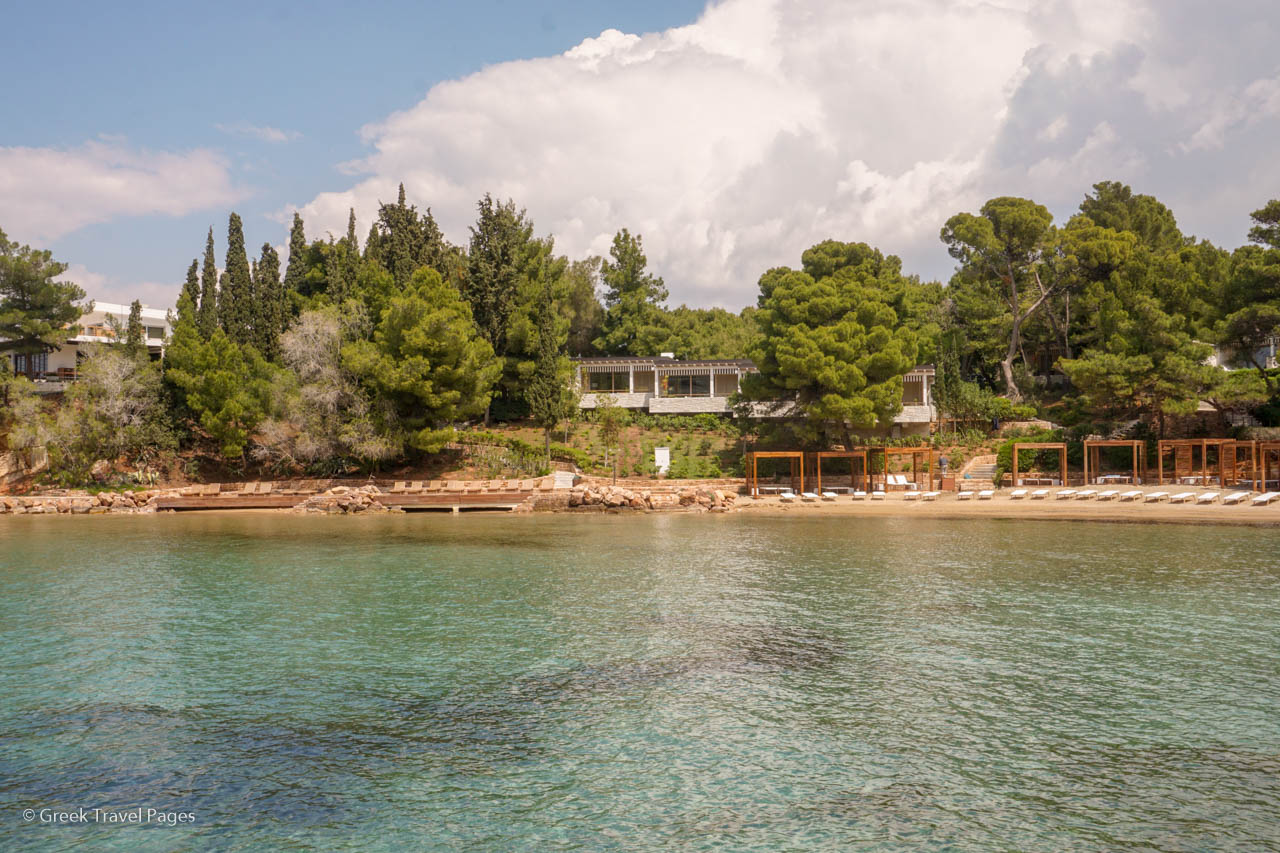 One of Astir’s renowned bungalows.