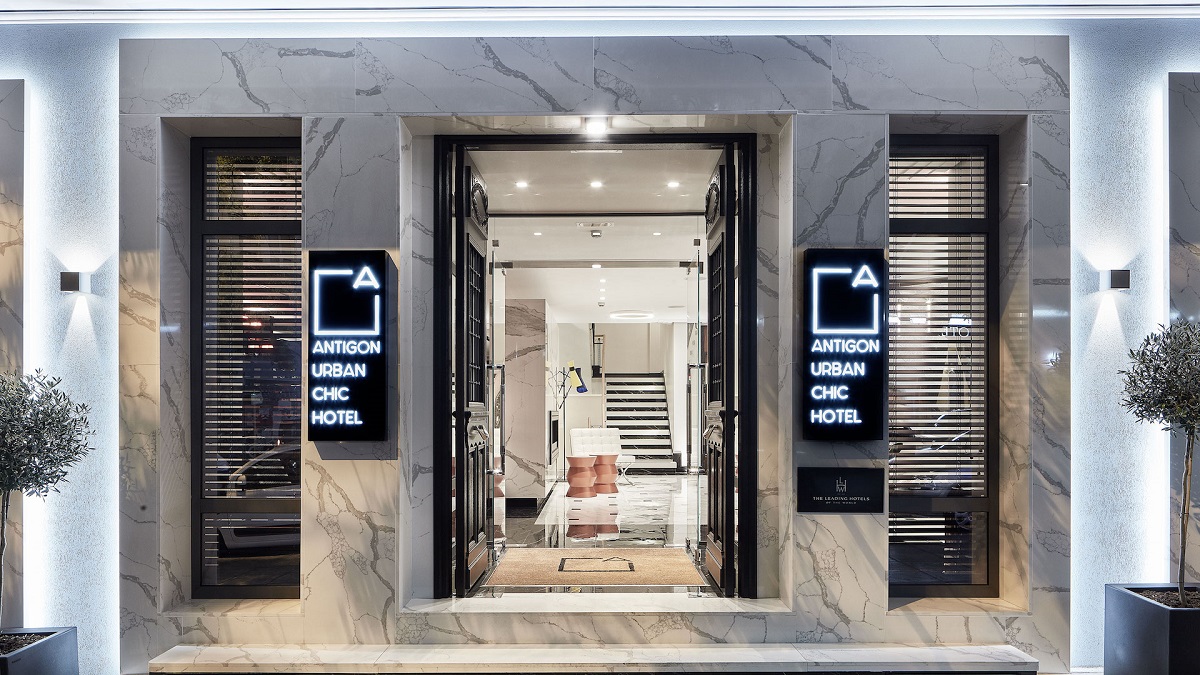 In under six months of operation, an unassuming hotel on a side street of central Thessaloniki has managed to win over crowds, awards and be listed among the World’s Leading Hotels (LHW).

Ladies and gentlemen, welcome to the Antigon Urban Chic Hotel, a newcomer to the northern port city and the first Thessaloniki facility to be accepted after meeting stringent quality criteria into the LHW series.

The 5-star boutique hotel, which won the gold award in the Best Greek New City Hotel category at the Greek Hospitality Awards last month, has 38 rooms and suites, and is housed in a renovated Neoclassical building dating back to the 1930s. 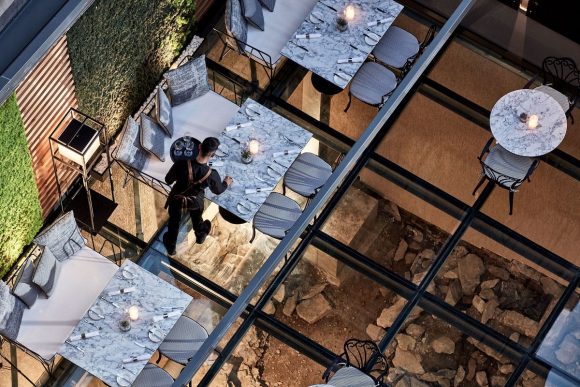 The hotel’s chic A-Bistro from above.

Aiming to cater to the needs of the eclectic traveler, particularly couples and  solo stays, the Antigon Urban Chic experience includes dinner or lunch in the A-Bistro literally above – thanks to a expansive glass floor – Roman Era ruins, jacuzzi and champagne overlooking Thessaloniki in the hotel’s Duval-Leroy champagne bar, meetings and more in its cozy conference hall, and a variety of tailor-made trips into one of Greece’s most magical cities.

As for the rooms? Minimal design supplemented with the latest in comfort and technology and enhanced by artistic touches and soft earthy colors. 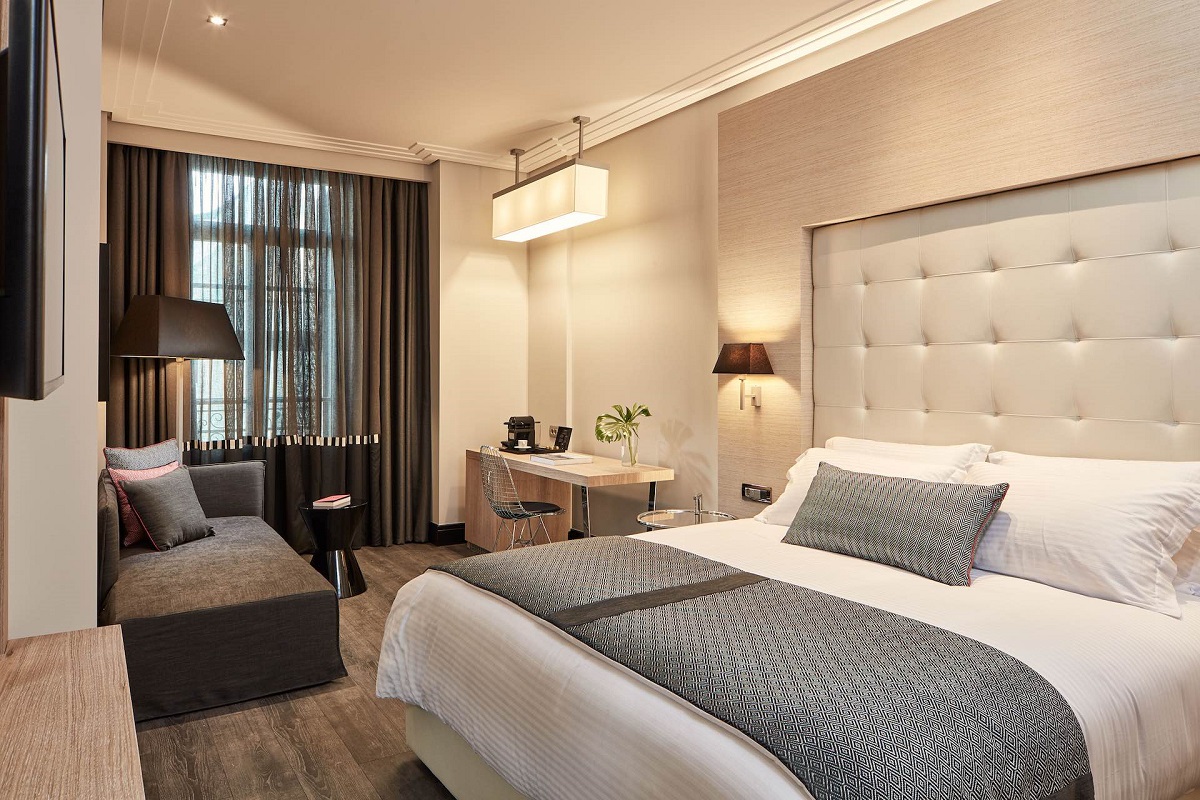 The Antigon Urban Chic Hotel, named after the road it is located on – 15 Antigonidon St – has been given a new lease on life thanks to Greek hotel developer and solutions provider HotelBrain.

Formed in 2000 in the lead to the Athens 2004 Olympics and ahead of the economic crisis, HotelBrain has come a long way since then, managing or operating today some 240 units in 70 destinations, with annual turnover to the tune of over 30 million euros, and with plans to expand even more in the coming period. 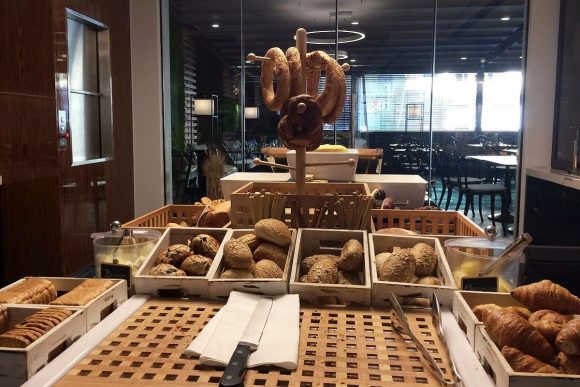 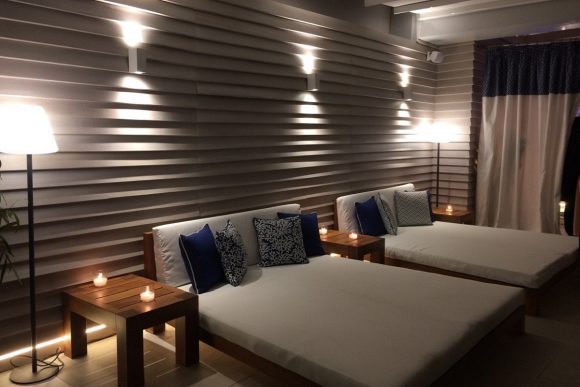 “The idea is to expand with an open, outgoing vision,” said a HotelBrain team of executives earlier this month during a presentation of the Antigon Urban Chic Hotel experience to media, influencers and bloggers, who were flown into Thessaloniki on the city’s ‘own’ carrier Ellinair. 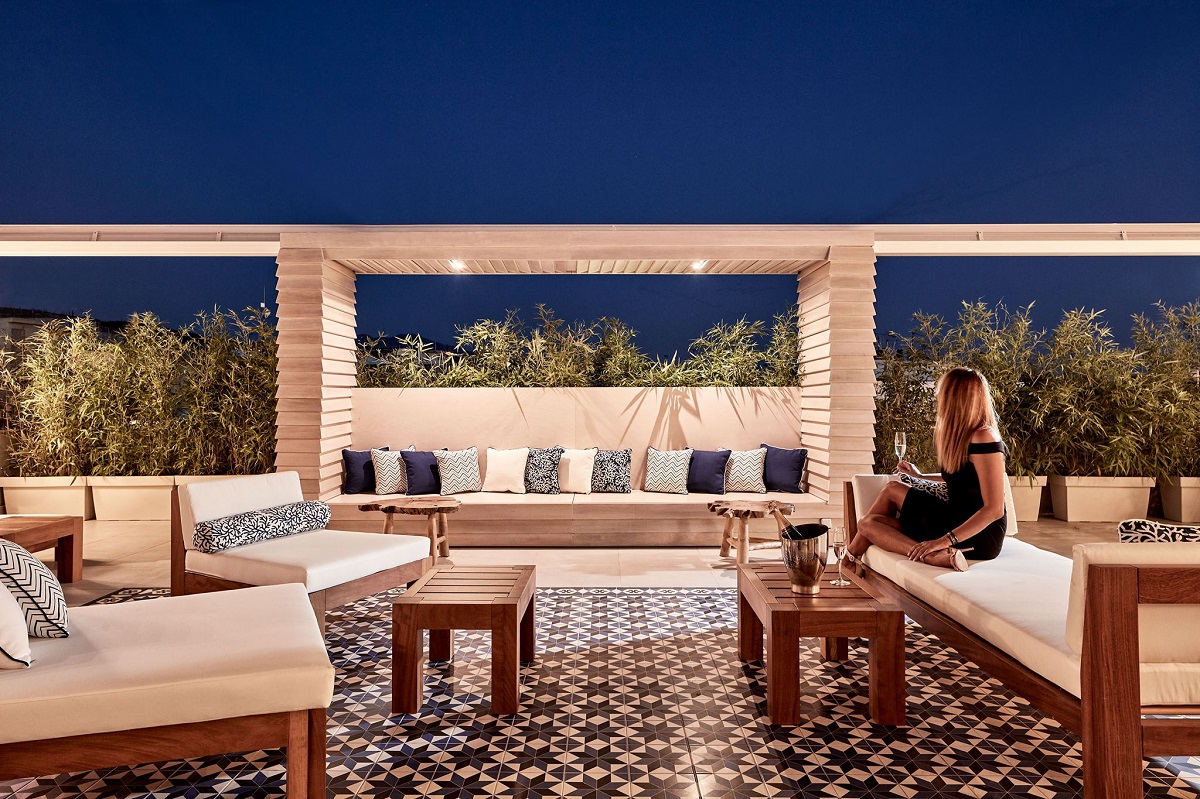 Besides Antigon Urban City, which is the first city hotel to be included on HotelBrain’s roster, other plans in the pipeline include the opening on June 15, of the self-operated 4-star, 104-room Bianco Olympico resort in the Sithonia Peninsula of Halkidiki, northern Greece, complete with private access to Vatopedi beach and targeted at families.

Betting on Thessaloniki’s growing popularity, HotelBrain is aiming to boost its presence even further in the port city with the opening of two new hotels by 2020. The company’s executives said no more other than the fact that one was a former hotel while the other would be housed in a historic building.

At the same time, HotelBrain has invested in the management of Avaton  Luxury Villas also in Halkidiki, in Ouranoupoli, at the foot of Mt Athos, as well as in the 5-star, 137-room Ilio Mare Seaside, which it now operates after a second consecutive year of management, located on the nearby island of Thassos, on Blue Flag Prinos beach.

In Athens, meanwhile, and within its strategy to add more city hotels to its collection, HotelBrain is set to launch in May a new 15-room boutique luxury unit on central Nikis St under the name Urban Frame Hotel.

As part of its expansion, HotelBrain founder and president Panos Paleologos announced earlier this year that the company had already launched projects outside Greece in 10 countries and set up a London branch – HotelBrain International Ltd – through which it operates abroad.

Paleologos notes that Greece’s hotel market holds plenty of promise. Once solutions are provided for issues with banks and creditors, recovering units can create added value without necessarily being taken over by international chains or passing into other hands, particularly in view of Greece’s growing popularity as a holiday destination. 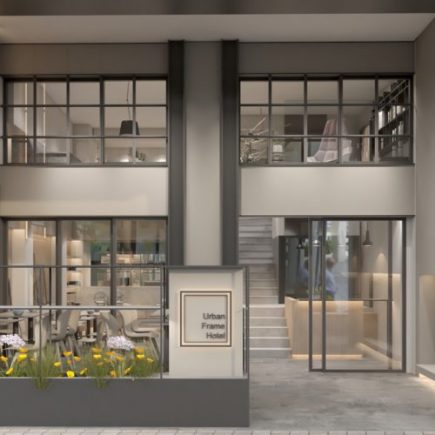 A glimpse of the upcoming Urban Frame Hotel

Paleologos believes that stepping in as an operator or manager for ailing hotels is a win-win situation for all parties involved.

In the meantime, through its subsidiary – HotelBrain Capital SA – the company has rented 45 hotels across all categories with a total capacity of 2,300 rooms.

Some of HotelBrain’s projects include the famed Bill & Coo Coast Mykonos, the Nefeles Luxury Residence & Lounge on Mt Mainalon in the Peloponnese, the Aristi Mountain Resort in Zagori, Epirus, and the Katikies on Santorini, among many others.