Two multi-storey buildings in the immediate surrounding area of the Acropolis have prompted the environment and culture ministries to investigate possible gaps in current zoning laws that would allow such interventions.Photo Source: secure.avaaz.org

Greece’s environment ministry announced this week that it would temporarily halt the issuance of new licenses for the construction of buildings in the area around the Acropolis after residents brought to publicity the construction of two 10- and 11-storey structures at the foot of the sacred hill.

The environment ministry comes after the culture ministry had said it would be calling on the Central Archaeological Council (KAS) to re-examine its approval of the buildings – set to be hotels – which are located within the archaeological area of the Acropolis, and that once completed will block the view to the world famous UNESCO heritage site. 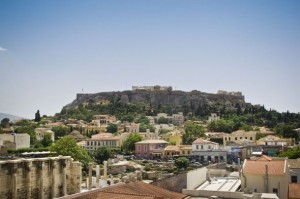 View of the Acropolis (archive photo).

However, it is unclear whether the two said constructions will remain in place.

On its part the environment ministry said it would stop all construction licenses until a new zoning law ensures the protection of the urban setting. Environment Minister Giorgos Stathakis did however request that legal documents pertaining to the one building being erected on Falirou St be re-examined. Once completed, building inspectors will check that the building permit is properly implemented. With regard to the second building on Misarliotou St, ministry authorities said no request concerning its legality had been submitted.

At the same time, the Athens Municipality said it too had acted within its jurisdiction as foreseen by the law and had approved the buildings after building permit approvals were issued by the relevant ministries and urban planning authorities.

The municipal authority is calling on the responsible authorities to revoke the permit for the structure on Misarliotou St and to proceed with a legal framework that will safeguard Athens’ urban and architectural character.

In the meantime, an online petition against the two constructions has already gathered 23,228 signatures.