The construction of two multi-storey buildings in the immediate surrounding area of the Acropolis has prompted the environment and culture ministries to investigate possible gaps in current zoning laws that would allow such interventions.

The two constructions, one reaching 10 stories high, spurred the strong reaction of locals, who are claiming that the buildings are located within the archaeological area of the Acropolis, and that once completed will block the view to the world famous UNESCO heritage site. 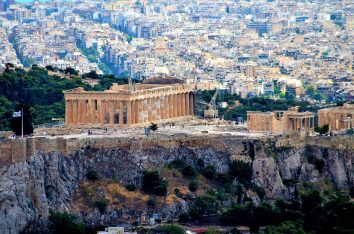 The Acropolis in Athens (archive photo)

The two ministries said they would be re-sending the relevant files concerning the two buildings (on Falirou and Misaraliotou sts, respectively) to the Central Archaeological Council (KAS) for re-examination. It should be noted that KAS is responsible for safeguarding all sites and areas of archaeological importance in Greece, and deciding on whether constructions keep to the law.

At the same time, the joint ministerial investigation will seek solutions for the preservation of the “city’s cultural identity as this is maintained through its monuments and social values and structured environment”.

In this direction, the directorate-general for urban planning said it would be setting up a working group together with the Athens Municipality and the culture ministry to review the building terms applicable for the wider area surrounding the Acropolis, including the neighborhoods of Makriyianni and Koukaki.

It should be underlined, that all building activity in the surrounding area of the Acropolis Hill – ie Areopagitou – Makrigianni-Rovertou Galli – Erechtheion streets – is covered by a presidential decree that limits the height of buildings  constructed and requires excavation works and approval before any building activity takes place.

In the meantime, an ongoing petition against the construction of the said buildings organized by the residents of Makrygianni (called Makyrgianni SOS) with the support of the Greek Society for the Environment and Cultural Heritage (ELLET) and the Organizations and Citizens Network for the Historic Centre of Athens has thus far collected over 11,769 signatures.