Greece Expects Visitor Numbers from Israel to Soar in 2019

Greek Tourism Minister Elena Kountoura with the GNTO team at the IMTM 2019 exhibition.

More than 700,000 Israeli travelers are expected to visit Greece this year, following a promotional drive spearheaded by Tourism Minister Elena Kountoura, which has generated an impressive rise in figures over the last three years.

On the back of strengthened bi-lateral relations between Greece and Israel, outbound tourism to Greece marked a 13 percent rise in 2018 to 600,000 visitors against 2017, while 2019 is already seeing a 16 percent rise in the number of pre-bookings and airline scheduling. 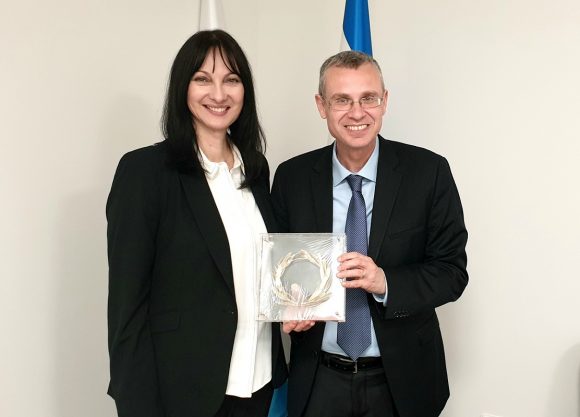 Continuing the ministry’s promotional campaign, Kountoura attended this year’s International Tourism Exhibition Tel Aviv (IMTM) this week, where she met with her Israeli counterpart, Yariv Levin, to discuss joint actions for the exchange of tourism flows between the two countries with a focus on religious and educational tourism, ways to tap into long-haul markets of Asia and the Americas, and plans to promote cruise travel in the Eastern Mediterranean targeted at European markets.

On the sidelines of ΙΜΤΜ, Minister Kountoura met with Israeli tour operators and travel professionals, and managed to increase Greece’s share in airline plans for the coming years, the ministry said.

Greece was represented at IMTM by the regions of Epirus, Central Macedonia, South Aegean, Thessaly, Crete, and the Peloponnese, the municipalities of Kavala and Volos, and tourist businesses under the Greek National Tourism Organization umbrella.

Western Greece Region Sets Aside €1m for Tourism Promotion until 2021