Ensuring the cleanliness and safety of the center of Athens, so guests are satisfied with their stay, are among the top priorities of the new Board of Directors of the Athens – Attica & Argosaronic Hotel Association.

“Athens has extended its tourism season. It is not the city we once knew, as it is open also in the autumn and winter months… We have many repeaters and have their comfort and satisfaction as our top priorities,” the association’s new president Labrini Karanasiou-Zoulovits recently told Greek journalists during an event in Athens. 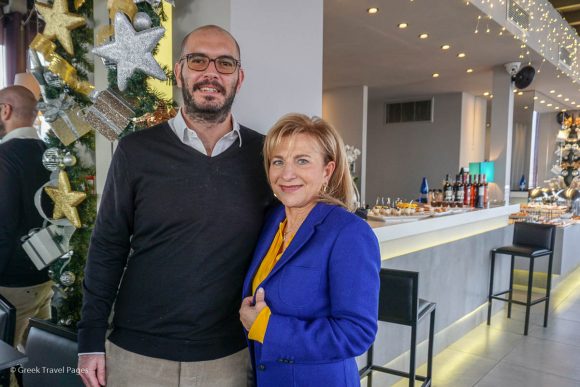 The president of the Athens – Attica & Argosaronic Hotel Association, Labrini Karanasiou-Zoulovits, with secretary general, Evgenios Vassilikos, at the rooftop restaurant of the Polis Grand Hotel.

The association’s new president, who is also the managing director at the Polis Grand Hotel, underlined that Athens is no longer just considered as a stopover destination enroute to the Greek islands, but has managed to attract its share of tourists interested in staying anywhere between three to eight days.

Formed in mid-October, the association’s new board of directors is aiming to keep the arrivals and overnights of Athens on a high level all year round.

For this reason, Karanasiou-Zoulovits said that the association is very much interested in forming synergies with other bodies in the city to face challenges and deal with issues concerning proper street lighting, cleanliness, safety in the city center and making public spaces more accessible to people with disabilities.

Regarding safety in particular, the association will request for the manpower of the police-manned tourist help office in the center of Athens to increase.

Improvement of city infrastructure is also on the agenda of the hotel association.

“Developing appropriate infrastructure is key to maintain the upward trend of the tourist flow to Athens,” Karanasiou-Zoulovits said, underlining that the association’s new board will also bring to the table the necessity of a metropolitan conference center in Athens.

On his part, the association’s secretary general, Evgenios Vassilikos, echoed the significance of developing infrastructure in Athens in order to stabilize visitor numbers. He also referred to the positive effect that the Athens Marathon has on hotel occupancy numbers every November, underlining the importance of such events for the Greek capital.

Referring to actions of the association in the near future, Vassilikos highlighted that additional promotional actions will take place for the islands of the Argosaronic, so that visitors to Athens will be aware that they can combine an island visit while in the Greek capital.