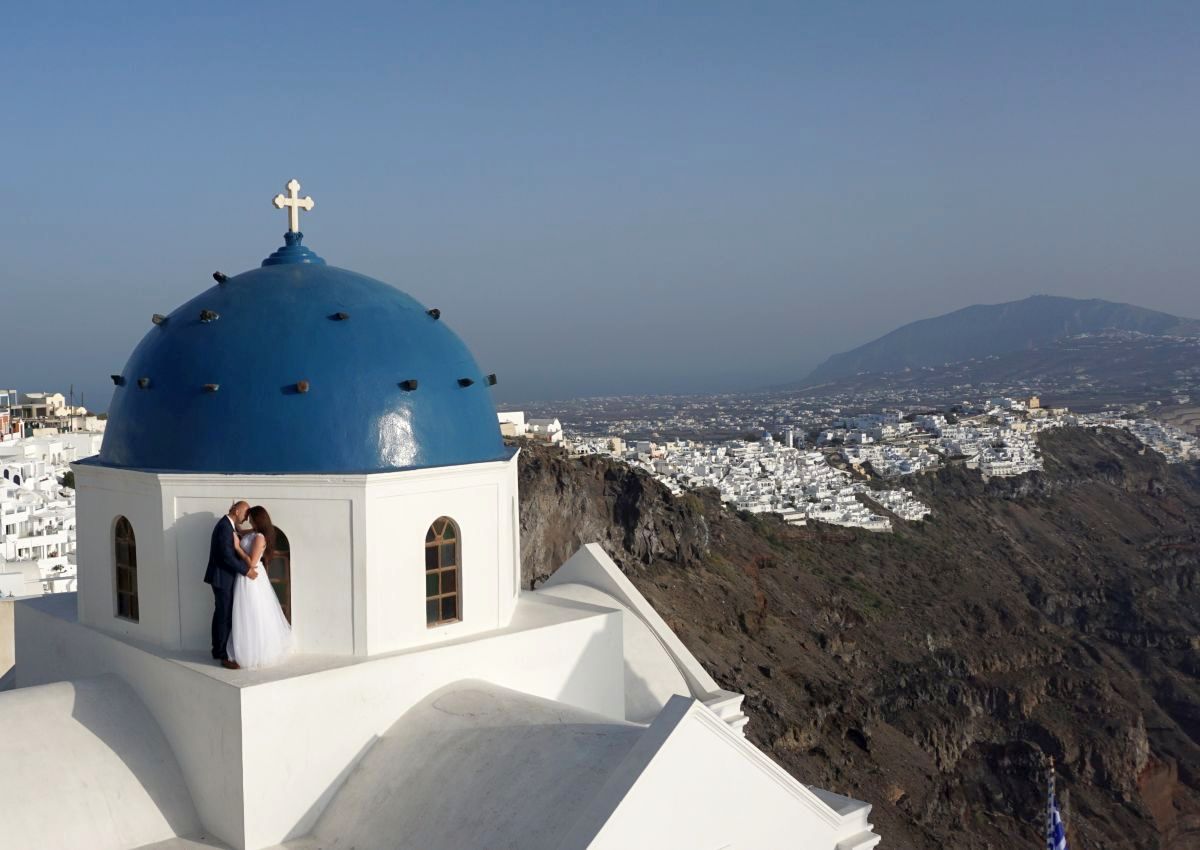 For years Santorini has been established as the ideal destination for wedding tourism with its volcanic caldera in high demand to serve as a backdrop for weddings, marriage proposals and vow renewals. Photo © GTP

Santorini, one of Greece’s most popular destinations, is expected to wrap up 2018 with over two million visitors (cruise passengers not included), up from some 1.7 million in 2017.

“It is a reality now, Santorini is an all year round tourism destination,” Thira Mayor Nikos Zorzos says. 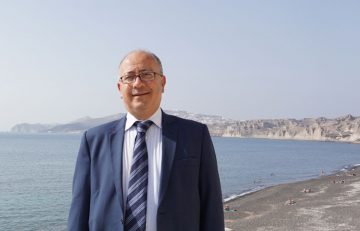 Although 2018 has around two months to go, tourism on Santorini is still booming with tourists, including culture lovers, newlyweds and families, arriving daily either by air, sea or cruiseships.

During the first eight months of the year, Santorini already welcomed 1,501,662 visitors, compared to 1,219,370 during the January-August 2017 period. If cruise arrivals are added to the number of visitors, this year the island will be counting over 2.5 million visitors.

The high numbers are the result of the island’s efforts to establish itself as an all year round destination, an initiative announced by the mayor in 2015.

“The initiative is coming along very well… Each year more businesses are staying open during the shoulder season,” the mayor told GTP Headlines during a recent press trip held for Greek journalists.

According to the mayor, last year’s winter season, December 2017-February  2018, saw Santorini welcome over 25,000 visitors as a number of hotels remained open.

“This year, more accommodation options are available as the Airbnb phenomenon has been overdeveloped here… I believe we will overcome 25,000 visitors in the winter,” he said. 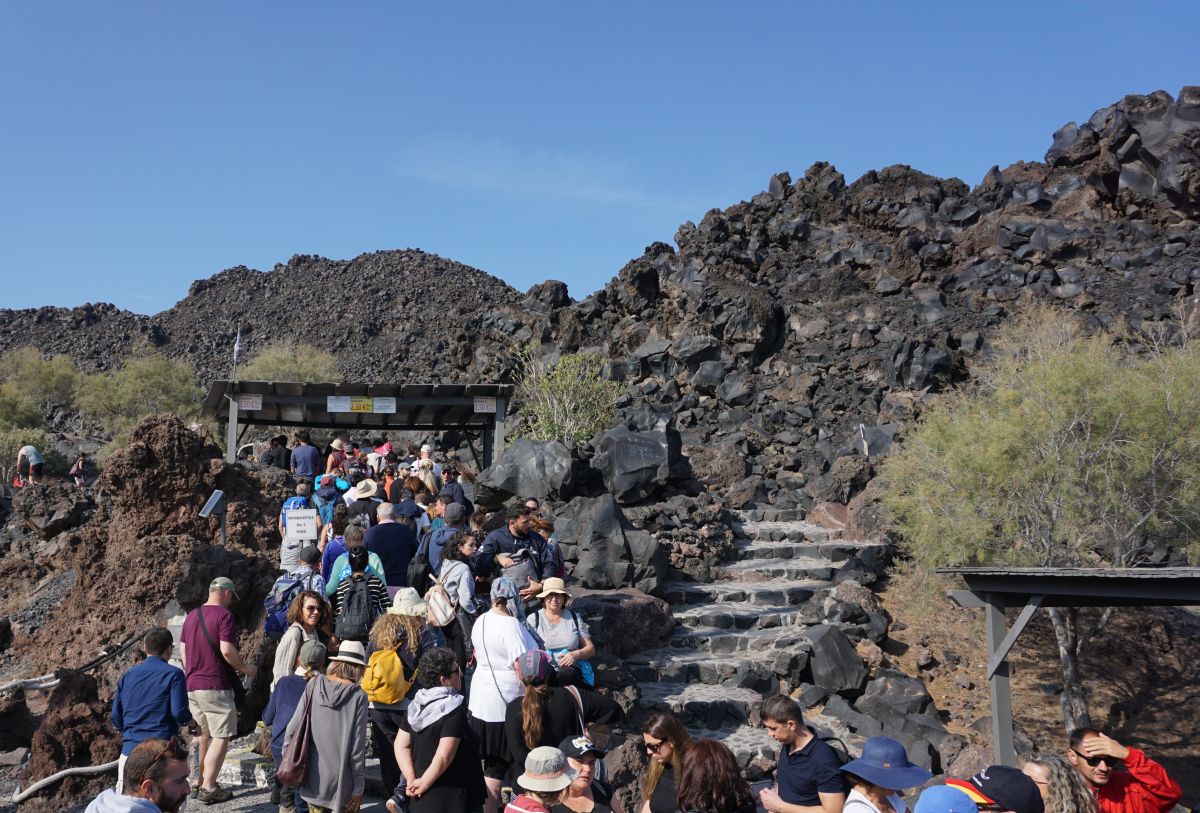 This winter season, around 130-140 hotels are open on Santorini and welcoming visitors, according to Greek hotelier, Kostas Konstantinidis.

Owner of the Heliotopos Hotel on the island, Konstantinidis was one of the first entrepreneurs to embrace the mayor’s 365-days tourism initiative, considering that he already was operating his hotel all year round from the winter season of 2011-2012, based on a personal business decision.

“The thought of making Santorini an all year round destination was mainly to welcome customers in the winter, visitors that we were slowly losing due to the congestion on the island in the summer due to the large crowds,” he told GTP Headlines. 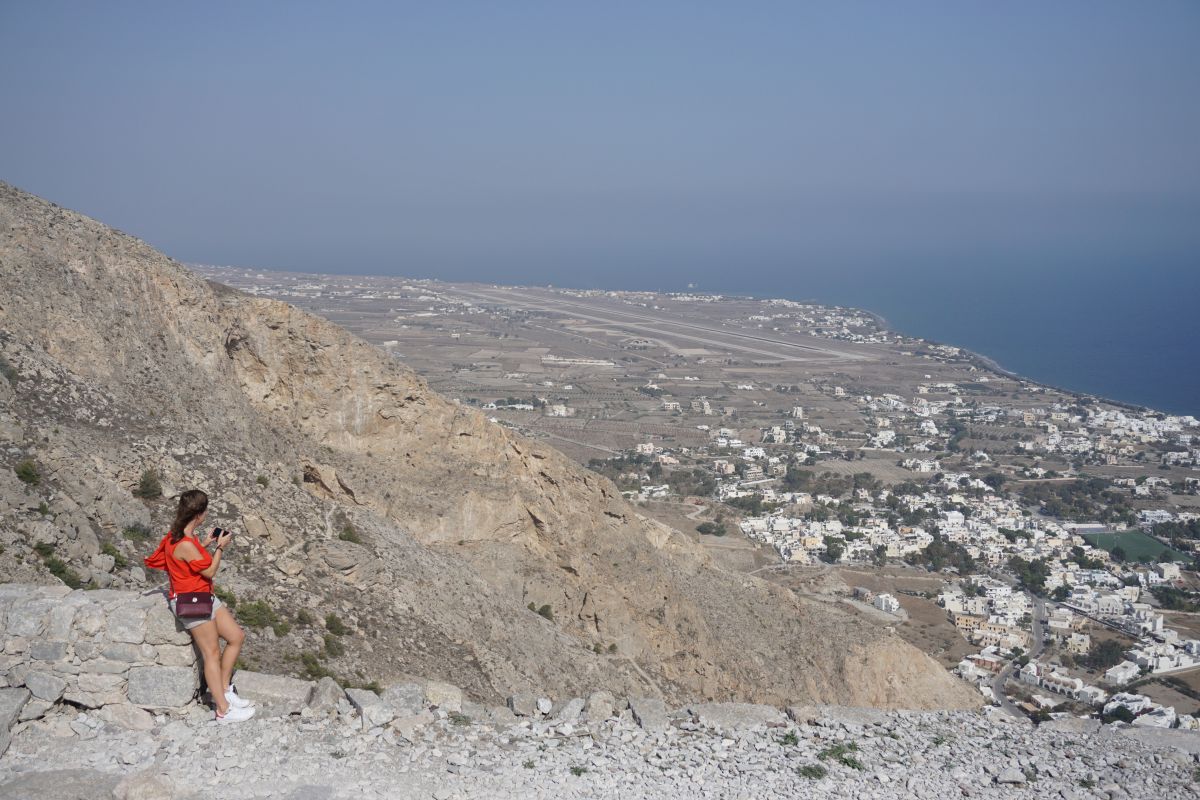 A tourists enjoys the view from the island’s archaeological site of Ancient Thira. Photo © GTP

“These are the more ‘quality tourists’ who are interested in the geology of Santorini, its archaeological side, the architecture, its wines… By staying open in the winter and having lower prices, these customers are more likely to come visit the island,” Konstantinidis said, adding that more and more restaurants and taverns are staying open year by year. 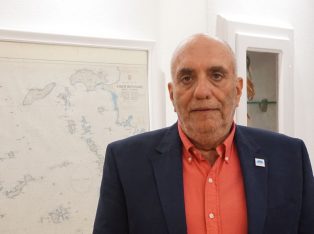 “Last year, during the winter season, around 25 restaurants were open… From this November until February, more will stay open… The island’s archaeological sites are also operating normally so it is safe to say that Santoirini is an all year round destination,” he said, underlining that the areas welcoming visitors in the winter include the caldera side, Oia, Imerovigli, Fira and Megalochori.

According to Konstantinidis, Heliotopos is open about 11 months a year with a one month pause for maintenance reasons and for the staff to take time off.

“We do not operate under the logic of hiring seasonal workers, since our employees are hired for the whole year. We have a permanent staff,” he said.

Heliotopos will close for a month starting on December 12. “Our occupancy levels until then are 90-100 percent,” he said. 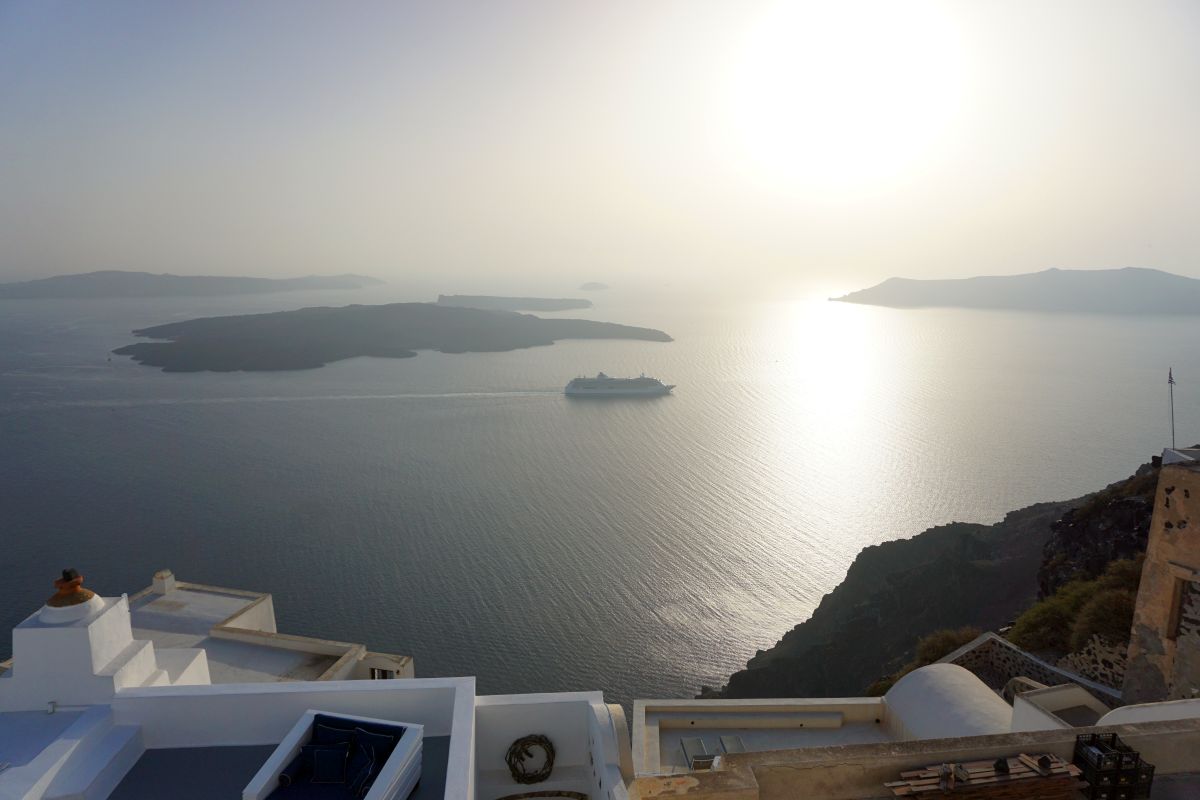 Santorini’s gradual transformation to an all year round destination is also hoped to help solve the massive implications of overtourism during the summer months.

“We surely have an overtourism problem on Santorini for at least three months, during the summer… We have to manage this situation better and put some limits on arrivals. One way is keeping the destination open all year so to extend the season but more has to be done,” he stressed.

In efforts to decongest the island, Santorini‘s municipal authority and the Port Fund of Thira this year launched a pilot berth allocation system in order to regulate the number of incoming cruise ships and limit the amount of cruise passengers on the island to 8,000 per day. Prior to the pilot system, which is expected to be in full force by 2020, cruise visitors to the island on peak season days reached to as many as 15,000. 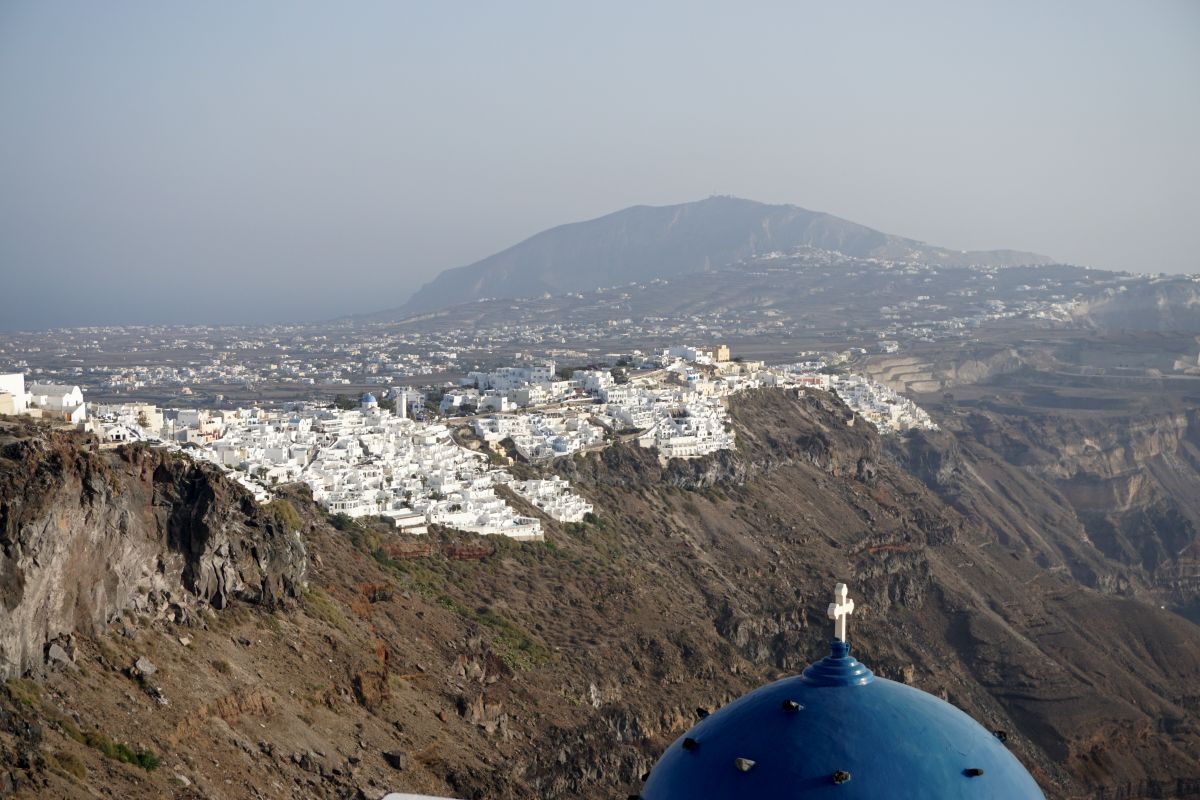 Although the situation has somewhat improved, Konstantinidis said that the increase of beds on the island, due to the construction of new hotels and rooms add to the problem.

“Building more hotels on the island is not the solution as if this continues we will soon not resemble an island anymore and Santorini’s magic will fade away. Already some parts of the island have changed. More construction will turn the island into a city destination,” he said.

On his part, Mayor Zorzos is trying to limit construction on the island. 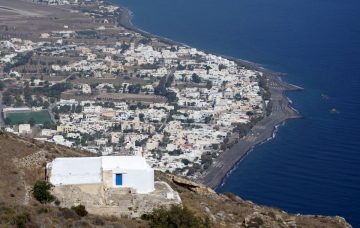 “In order for Santorini to remain high in the preferences of travelers, restrictions are essential, he said, underlining that rules are necessary to limit the construction of new hotel units, as well as homes that are then rented out via online platform such as Airbnb.

“Right now 18 percent of the island is occupied by construction,” the mayor stressed, adding that the presidential decree on building zones needs to be amended and more checks need to take place.

“As we speak there are no control mechanisms… Just imagine that Santorini’s urban planning department has only one engineer to oversee six islands,” Mayor Zorzos added.