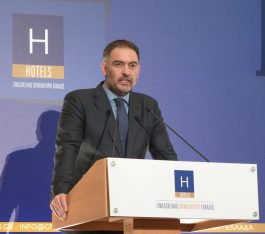 “Supporting the interests of the sector and the active participation of the country in the development of the European tourism market is a great success for Greece,” Vassilikos said in an announcement.

HOTREC represents the hotel, restaurant and café industry at European level and represents some 1.9 million businesses.

“Strengthening the entrepreneurship of Greece’s small- and medium-sized tourism enterprises in order to upgrade the country’s tourism product is a priority the Hellenic Chamber of Hotels will serve with its participation in the Executive Committee of the association,” Vassilikos added.

The newly elected President and Executive Committee will be representing a highly competent association, composed of 44 National Associations, located in 30 European countries, which offers a unique best practice and knowledge sharing platform.

“The goal of the newly elected ExCom will be to foster innovation and to promote investment among the 1.9 million enterprises of the sector, promoting smarter and better regulation at the core of the new EU mandate,” HOTREC’s new president said in an announcement.

Christensen underlined that 2019 will be marked by European elections and a renewal of the European Parliament and Commission.

“It will be our task to convince policy-makers to make the 2019-2024 EU legislature a success for tourism by unlocking SMEs and microenterprises’ growth potential and by fostering entrepreneurship,” he added.