With the signing of the four ministerial decisions, sectoral collective labor agreements are deemed mandatory for workers in the sectors of banks, shipping companies, travel/tourism agencies and agencies that are members of the International Maritime Union.

The extension of the four sectoral collective labor agreements affects some 77,000 workers of the private sector. According to reports, these workers should expect an increase in their monthly earnings (from 100 euros to 200 euros). 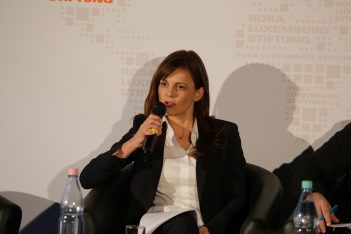 “Employees once again have the ability to sign collective agreements that will improve their wages and working conditions,” Minister Achtsioglou stated to the Athens News Agency, adding that the labor ministry is currently examining existing sectoral collective agreements to determine whether they meet the requirements to be extended and therefore become binding for companies and employers.

On his part, Greek Prime Minister Alexis Tsipras said that the signing of the ministerial decisions was the first governmental decision that marks Greece’s exit from the memorandums.

“The Labor Minister has signed for the first four collective labor agreements, which involve some 75,000 workers who will see direct increases in their salaries,” a statement issued by the PM’s press office said.

“The struggle to support workers continues to be our priority in the post-monumental era,” the statement concluded.