Irish carrier Ryanair has announced a new route from Athens to London Luton, as part of its winter 2018 schedule. 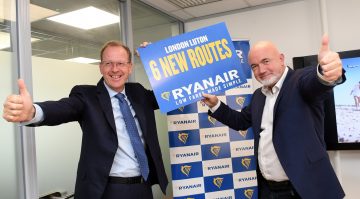 According to the airline, the new route will offer Greek consumers even more choice and lower fares for their travels and their can enjoy the latest “Always Getting Better” improvements that include reduced checked-in bag fees (lower 25 euros fee); Ryanair Rooms with 10 percent off Travel Credit; Ryanair Transfers; and punctuality promise.

Ryanair’s “Always Getting Better” campaign also includes a Price Promise. “Find a cheaper fare and Ryanair will refund the difference + €5,” the airline promises.

To celebrate the new Athens-Lodon Luton route, Ryanair has released low-priced seats for sale for travel from September 2018 to January 2019, bookable until Monday, August 27, midnight.

Apollo Travel: New Flight from Oslo to Samos for Summer 2019