The Greek culture ministry announced this week that it had secured a total of 276,000 euros in funding for works on the ancient Amphipolis site to include the construction of a network of walking routes for visitors.

The routes will offer travelers a chance to tour the excavated monuments in the central area of the archaeological site which includes the Christian Acropolis and two separate sub-sections of the city. 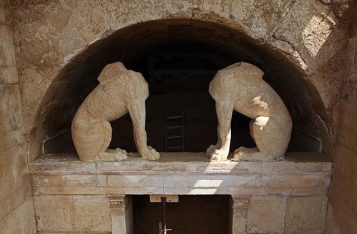 Through the project, the culture ministry is aiming to establish the Amphipolis site as a leading archaeological destination and thus a driver of the local economy. The site, which is where Alexander the Great prepared for campaigns leading to his invasion of Asia, revealed in 2014 a Macedonian tomb with archaeologists still seeking to find the identity of the person buried there.

In the meantime, the Region of Central Macedonia is requesting Amphipolis be named cultural heritage site within the European Territorial Cooperation Program “Greece – Bulgaria 2014 – 2020”.

According to Greek Tourism Confederation (SETE) forecasts, the site is expected to record a 21 percent rise in the number of arrivals and a 15 percent increase in revenue over the five years, while the number of visitors interested in culture will exceed those seeking sea and sun holidays.