Greece in Top 10 Most Popular Countries for Russian Property Buyers

Greece is among the top 10 most popular countries among Russian property buyers, according to Tranio, an international overseas property broker based in Russia.

Tranio analysed data from Russian search engine Yandex relating to search queries for residential real estate from Q2 2016 to Q1 2018 to find out the 10 most popular countries among its users.

According to the data, Greece is in the sixth most popular country among Russian foreign property buyers. Spain is in the first place and followed by Bulgaria, Germany, Italy and Montenegro. Finland comes in seventh and is followed by the Czech Republic, France and Poland.

Interest towards property in Greece began rising about a year ago, Tranio’s data revealed. In Q4 2016, Yandex processed only 28,000 search queries, but the figure almost doubled in the first quarter of 2018. In total, Russian nationals searched for Greek property 313,000 times in the past two years.

Tranio underlines that one of the main incentives for Russian nationals to buy Greek property is the country’s “golden visa” program under which foreign investors who buy one or more properties totaling 250,000 euros or more is entitled to residency in Greece. 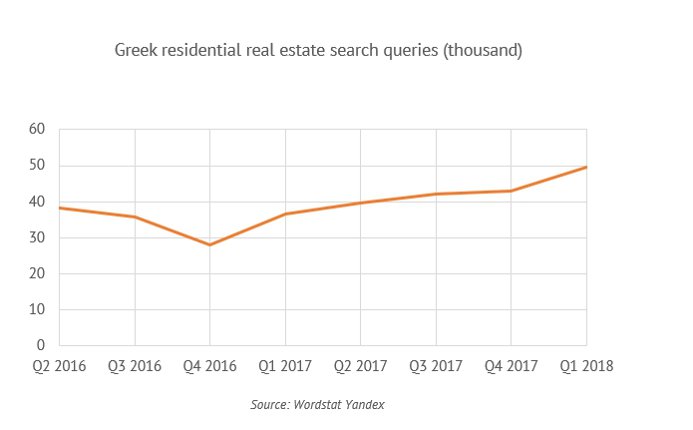 “This is one of the cheapest golden visa programs in Europe, and in view of Greece’s economic recovery and the rapid development of its tourism industry, many foreign buyers believe that Greek property is a profitable investment,” Tranio said.

According to the Bank of Greece, the total value of transactions involving foreign nationals in the Greek property market in 2017 exceeded the 2016 figure by 87 percent.