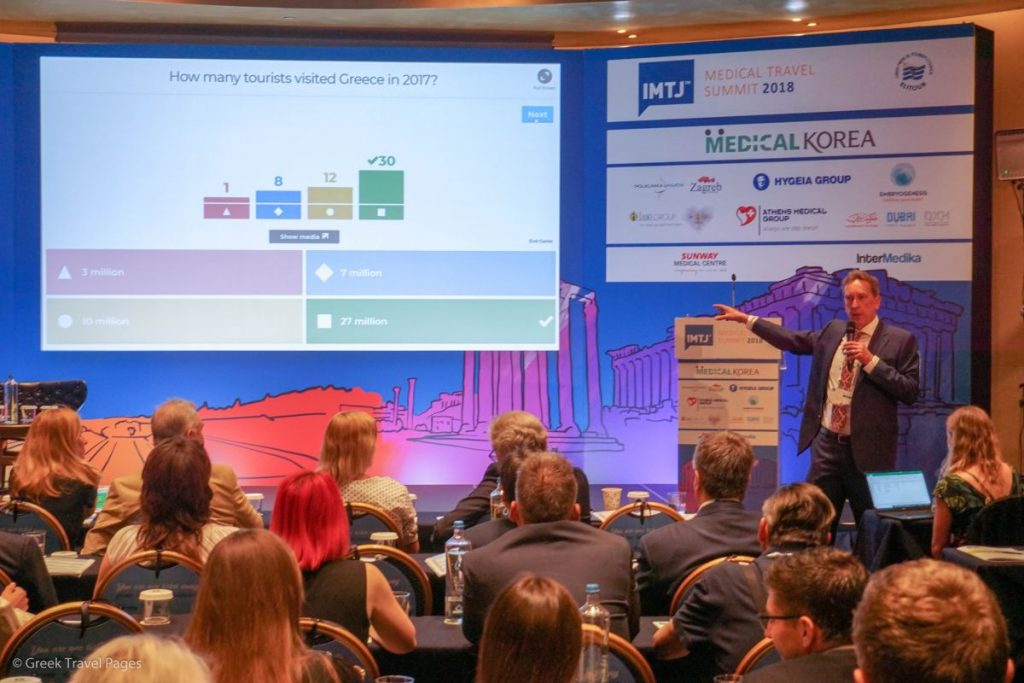 Greece has a real opportunity to grow the business of medical tourism, considering its record of arrivals last year, IMTJ President Keith Pollard, said during the IMTJ Medical Travel Summit 2018, which opened in Athens on Tuesday. 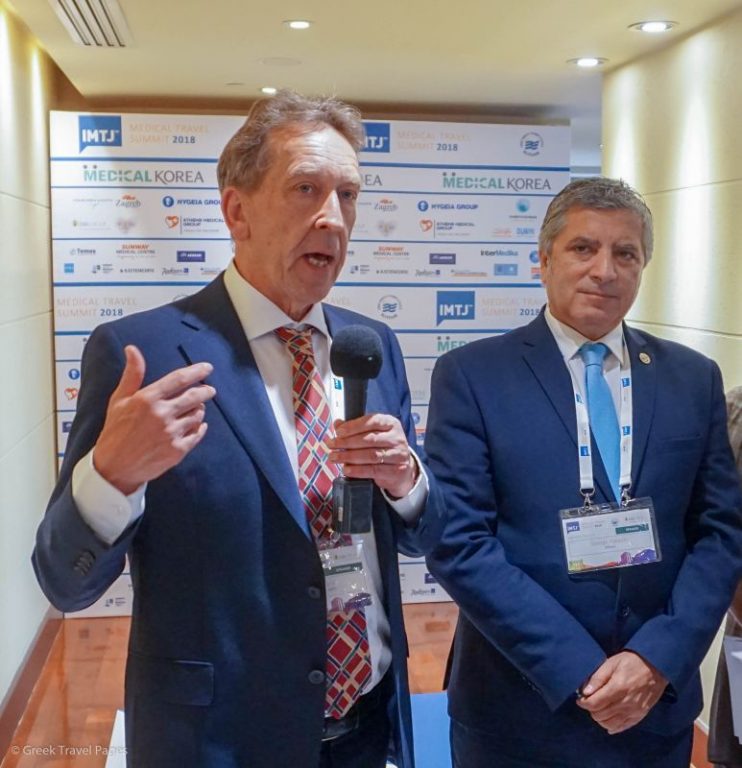 “Greece’s tourism is recovering… 27 million tourists came last year and only a small proportion were medical tourists,” Pollard said to reporters on the sidelines of the summit, adding that Greece must encourage its visitors to also return for medical tourism purposes.

“The benefit of this conference coming to Athens, is that it gives Greek hospitals, clinics, Elitour and the providers in Greece the chance to learn from some other parts of the world on how they can develop their country as a medical tourism destination,” he said.

Attendees of the the IMTJ Medical Travel Summit include medical tourism professionals from all over the world, including Malaysia, Korea and the United States. “These destinations are doing a great job of medical travel,” Pollard added. 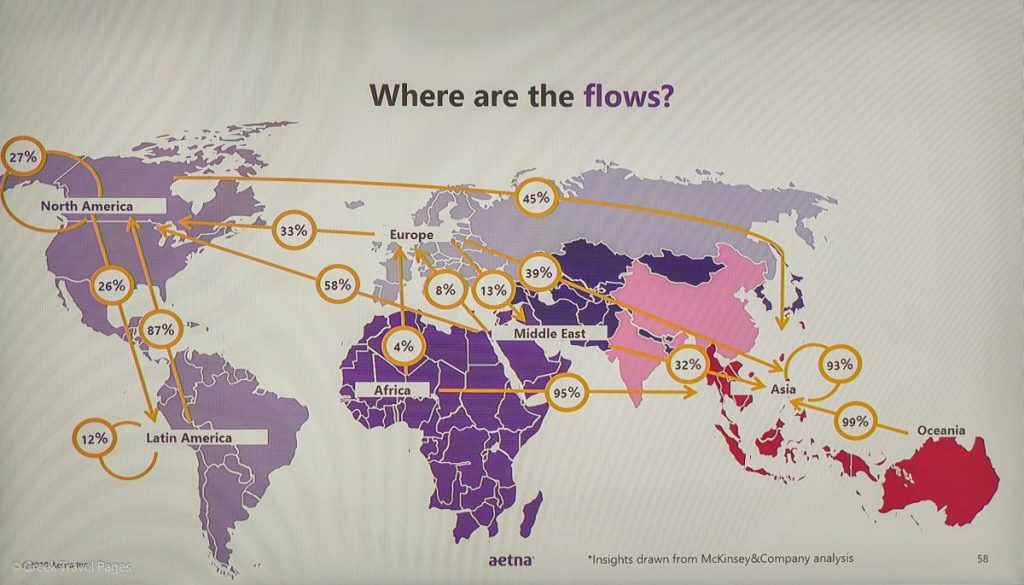 A slide showing where the flows of medical travelers go, was presented to the IMTJ Medical Travel Summit 2018 audience.

“What good destinations do is set standards… Greece should regulate hospitals or clinics that can or can not offer medical tourism services,” Pollard said, adding that destinations that have suffered are those that lack regulations. 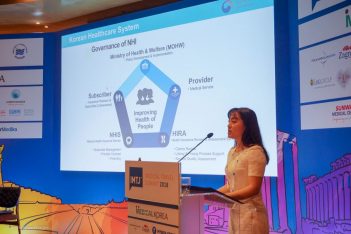 The healthcare policy of Korea was presented by Kim Minju from the Ministry of Health and Welfare of Korea.

Giving an example, Pollard informed that only certain hospitals in Malaysia, Korea and Dubai are allowed to handle international patients due to regulations set by the governments in those countries.

Pollard also underlined that being a medical tourism destination is not only about servicing tourists in the country for medical procedures, but also servicing the tourists when they return home. “Don’t forget. A patient may need assistance afterwards,” he underlined.

He then suggested for doctors in Greece to seek partnerships with Greek doctors working in destinations where the country is aiming to attract medical tourists from, such as the UK.

“Greece could partner with them for post care and support for the medical tourists,” Pollard said, giving the example of Budapest, Hungary, which has been labeled as the dental tourism capital of Europe, attracting hundreds of thousands of dental tourists from Germany, UK and Scandinavia

“Budapest dentists established a base and have supporting dentists in the home destinations of the tourists,” he said.

Elitour has launched the World Institute of Greek Doctors, which aims to bring together the knowledge of the leading Greek doctors around the globe and work in the direction of launching partnerships between doctors in Greece and those working abroad.

“Medical tourism exists in Greece. It is a fact. It is something that is happening, but we have not yet managed to get the word out…” – Hygeia Hospital Group Commercial Account Manager George Soras 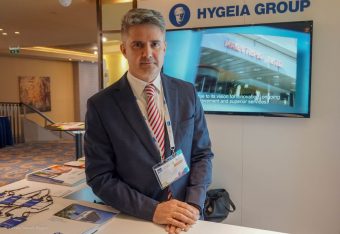 “This will automatically launch contacts and new synergies with travel agencies from abroad and build trust with stakeholders… This way everyone will know that among other things in Greece, medical tourism and health tourism are also available,” Soras told GTP Headlines.

According to Soras, one of the leading medical tourism countries in Europe is Germany, which has the highest quality of health services in the region and can also compete with the US. Another strong medical tourism destination is Spain for tourists interested in undergoing IVF (In Vitro Fertilization) procedures. 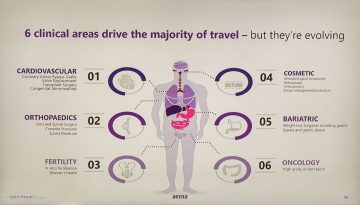 “Medical tourism exists in Greece. It is a fact. It is something that is happening, but we have not yet managed to get the word out… What we have to do is discover which (medical tourism) forms differentiate Greece from all the other markets because there is huge competition from countries such as Turkey, Croatia and Poland… This is something that happens anyway for leisure travel, just how a tourist chooses Greece for holidays against Poland and Croatia, we have to find the reasons why a medical tourist would come to Greece instead of choosing other countries.”

An Elitour-member, HYGEIA is the only hospital in Greece with Joint Commission International (JCI) accreditation, a distinction given by the most distinguished and internationally recognized Accreditation Standard for Healthcare Organizations.

The IMTJ Medical Travel Summit will wrap up on May 24.

The Greek Travel Pages (GTP) is among the supporters of the summit.

Tourism an Investment in the Future, Kountoura Tells EU Parliament