Symi’s New Port to be Inaugurated on May 8

The new port of Symi, located in the area of Petalo in the northern part of the island, will be inaugurated on May 8 by the President of the Hellenic Republic Prokopis Pavlopoulos, according to an announcement by the Municipality of Rhodes.

Budgeted at 5.8 million euros and funded by the National Strategic Reference Framework and the Public Investments Program, the new port was completed in late 2017. Its operation is expected to boost tourism in the area and benefit the island’s economy. 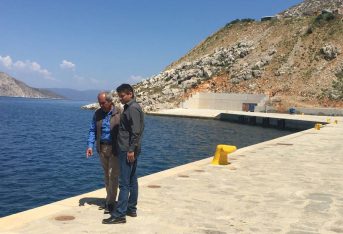 The inauguration ceremony coincides with the celebrations for the 73rd anniversary since the end of World War II, which will take place on the Dodecanese island in the presence of local officials and the Mayor of Rhodes Fotis Hatjidiakos.

Covering an area of 4,000 square meters, the port includes a 345-meter quay, which will be able to accommodate small cruise ships.

Further construction work is expected to take place in the future, which will include new infrastructure on shore and improvements on the road network leading to the port.

Symi is located 25 miles north of Rhodes and is known for its beautiful neoclassical buildings. The island’s economy is mostly driven by tourism, fishing and trade.