Top Kinissis Hellas, Greece’s representative for MSC Cruises, hosted an event onboard the MSC Musica ship on Thursday, April 19, while it docked in the Piraeus Port. 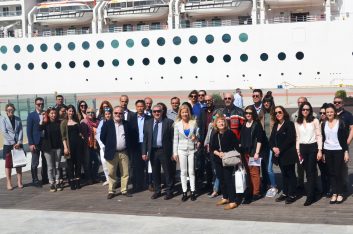 During the event, which was attended by travel agents and media representatives, Top Kinissis presented the 2018 itineraries of the company’s ships MSC Musica and MC Poesia, which this year will serve passengers from Piraeus.

With a capacity to carry 3,223 passengers each, the MSC ships are said to be two of the largest cruise ships that have stopped at the port of Piraeus. Each ship has 1,275 cabins, 80 percent of which feature private balconies.

The MSC Musica and MC Poesia ships each boast a number of onboard restaurants and bars, a 1,240-seat theater, a casino, a gym with panoramic sea views, four jacuzzis, three swimming pools, a beauty center, 24-hour room service, child care and an exciting excursion program at the nearby ports.

Arriving from Venice, the MSC Poesia will begin its summer calls to Eastern Mediterranean ports.

The cruise itinerary of the MSC Poesia will be repeated every Wednesday and the route of the MC Musica will take place every Thursday, throughout the summer and until the beginning of October.

While presenting the 2018 cruise itineraries, MSC’s executive director, Angelo Capurro, noted that over the last 15 years, more than two million MSC cruise passengers have visited Piraeus and Athens, which add up to some 150,000 passengers a year.

According to an announcement, MSC Cruises is considered the first European cruise company with 16 luxury ships and one of the world’s youngest fleets. The company’s first cruise ship MSC Lyrica was built in 2003 and refurbished in 2015 along with another three cruise ships of the same series.

MSC Cruises recently launched the MSC Seaside, the first of the Seaside class ships that has a capacity to carry 5,000 passengers. Weighing 154,000 tons, the MSC Seaside cruises at a speed of 24 knots and is the largest MSC ship to date.