On occasion of World Heritage Day on April 18, Google Arts & Culture announced that it has partnered with non-profit CyArk for a new online project offering users the chance to ‘experience’ some of the world’s greatest wonders in 3D, among them Greece’s Ancient Corinth, Thailand’s Ayutthaya Kingdom, the Al Alzem Palace in Syria, Berlin’s Brandenburg Gate and the ancient Mayan metropolis of Chichén Itzá in Mexico. 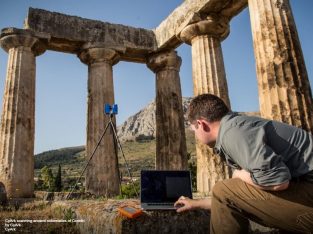 CyArk has captured accurate models via laser scanning and drone technology aiming to create the largest and most detailed 3D digital archive of the world’s endangered wonders and in turn offer virtual tours of 25 of these sites online through the Google Arts & Culture “Open Heritage” project, by downloading the free app for iOS or Android or via Google’s VR platform, Daydream.

The project made its debut on Monday, and allows users to access these sites through their computers, smartphones, or virtual reality (VR) headsets. Users can see ancient temples and sites from multiple angles and zoom in to see even more details as if actually walking through them.

Ancient Corinth was one of the largest and most important cities of Greece, located on the Corinth Isthmus, which joins the Peloponnese to the mainland halfway between Athens and Sparta. The ancient city-state had a population of 90,000 in 400 BC and was partially destroyed by earthquakes in 365 BC and 375 BC.

“With modern technology, we can capture these monuments in fuller detail than ever before, including the color and texture of surfaces and the geometry captured by laser scanners with millimeter precision in 3D,” said Google Arts & Culture Program Manager, Chance Coughenour.

“These detailed scans can also be used to identify areas of damage and assist restoration efforts,” Coughenour, who is also an archaeologist, added in a press release.