The Region of Thessaly recently launched three new videos, as part of its “Handcrafted by Time” campaign, aiming to promote the area’s tourism offerings. 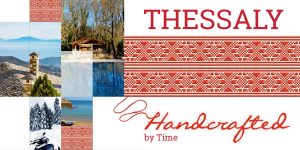 The campaign was launched two years ago by the Thessaly Tourism Partnership, a cooperation platform created by Marketing Greece, the Greek Tourism Confederation (SETE), Coca Cola Tria Epsilon and the Region of Thessaly.

The campaign’s content portfolio includes rich, original audiovisual material which consists of 40 Travel Stories of 25,000 words in English and Greek; more than 200 photographs and seven videos.

“The three new videos highlight Thessaly’s unique features, with images that capture the region’s soul,” the region said in an announcement.

Entitled “Crafted by Nature”, the first video reveals the harmonious coexistence of the region’s mountains and the sea, with Trikala, Meteora, Elati, the Plastira Lake and the Sporades islands among the locations featured. It also shows  the plethora of activities and exciting experiences; the moments of adrenaline rush but also of relaxation offered in view of the magic landscape of Thessaly.

The region’s second video, entitled “Crafted by the Seasons”, focuses on the city of Larissa, which is open to history, art, culture and invites its guests to discover its treasures all year round.

“Crafted by Human Touch” is the title of the region’s third video, which focuses on the residents of Thessaly, their unique features and their connection – through the centuries – to the artifacts they produce with their own hands, and the customs  preserved through time.

The campaign’s material is available to tourism enterprises and local organizations for their promotional activities.

Study: Santorini to See Most 2018 Hotel Bookings in September