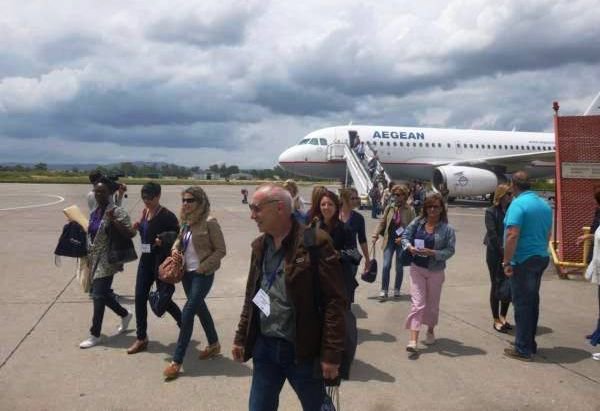 Arrivals of foreign passengers at Greek airports in January reached 505,172, up by 9.7 percent, compared to the same month in 2017, according to data released on Tuesday by the Hellenic Civil Aviation Authority (HCAA).

The Authority underlined the significance of the 9.7 percent increase and said that the overall statistics for airport traffic in January 2018 showed “encouraging data” that this year will be positive for Greece’s air traffic.

According to the data, in January 2018, the total number of passengers traveling through Greek airports reached 1,978,490, showing an increase of 3.7 percent, compared to the corresponding period of 2017 when 1,907,981 passengers traveled.

The total number of flights to Greek airports reached 20,359 (of which 11,666 were domestic and 8,693 were international), showing an increase of 0,2 percent compared to the same month last year when 20,323 flights were carried out.

According to HCAA, the airports of Athens, Thessaloniki, Heraklion, Rhodes and Chania showed the highest passenger traffic for January.

The total number of passengers traveling through Greek airports in January 2018 may have reported a rise overall, however German transport company Fraport on Tuesday reported that the 14 Greek regional airports it manages posted a 5.1 percent slowdown in traffic to a total of 549,506 passengers.

“This is primarily due to runway renovation works at Thessaloniki Airport – Fraport Greece’s busiest airport – which reported 309,586 passengers in the reporting month (down 12.2 percent),” Fraport said in an announcement.

After Thessaloniki’s airport, the second and third busiest airports were Rhodes with 58,673 passengers (up 6.3 percent) and Chania with 43,255 passengers (down 36.2 percent).