Tapping into Kalymnos’ vast diving legacy as well as newly emerging tourism experiences such as climbing are among the government’s top priorities for the years ahead, Prime Minister Alexis Tsipras said over the weekend attending the annual Blessing of the Waters (Epiphany) ceremony on the Dodecanese island.

Tsipras underlined the significance of the reopening of the Kalymnos diving school, which he said would train divers who would later man both the ship building and tourism industries. 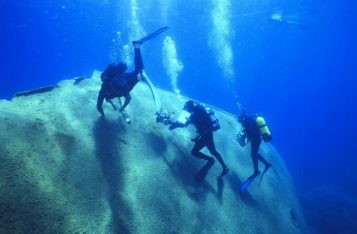 Referring to the country’s remote island regions, Tsipras added that tapping into diving and climbing tourism would contribute greatly to the local economy, extending the tourism season and creating year-round jobs.

The prime minister also referred to the difficulties posed by the Kalymnos airport, saying that the lack of space for expansion and the strong winds were problems making it difficult for large aircraft to land there.

Tsipras said he would be sending aviation authorities to look into ways to either expand the current airport or move it to a new location, most likely to the Paleonisos peninsula.

Another issue on the government’s agenda includes the construction of a new dock with EU funding to serve larger vessels which have difficulty approaching the current port of Kalymnos.

The Greek PM concluded that it was vital that measures to support local fishing enterprises be taken including the updating of the legal framework and the allocation of EU funding towards that goal.