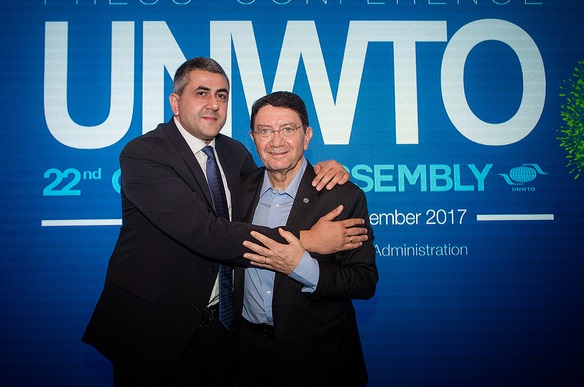 Adapting the tourism sector to new challenges including safety and security, market changes, digitalization, employment and natural resources are the priorities set by the newly appointed Secretary General of the World Tourism Organization (UNWTO) Zurab Pololikashvili.

In his New Year message Pololikashvili expressed his commitment to work closely with all relevant parties “for a more competitive and responsible tourism sector”.

“One in 10 people in the world are directly or indirectly employed by tourism. It is our responsibility to ensure that tourism benefits each and every community, leaving no one behind,” Pololikshvili said.

“As we move towards a future guided by the universal 17 Sustainable Development Goals (SDGs), I take upon me to lead UNWTO with a focus on building strong partnerships with public and private sector, fostering jobs and opportunities for all, mastering technology and innovation and advancing sustainability and the fight against climate change,” he added.

Pololikashvili has replaced Taleb Rifai, who held the position for 8 years.

In his final message as UNWTO Secretary General, Rifai spoke of the organization’s achievements during the last few years: “The United Nations General Assembly declared 2017 as the ‘International Year of Sustainable Tourism for Development’. This was, without doubt, a global recognition of tourism as an important contributor to the development agenda through economic growth, social inclusion, as well as cultural and environmental enrichment and preservation,” Rifai said.

He also referred to the “Measuring Sustainable Tourism” initiative and the launch of the Travel.Enjoy.Respect campaign; the adoption by members states of the Tourism and Sustainable Development Goals Declaration and the presentation of the “Tourism and SDGs” report, which “looks into the links between tourism and the SDGs in national policies, in private sector strategies and sets recommendations for a common journey towards 2030”.