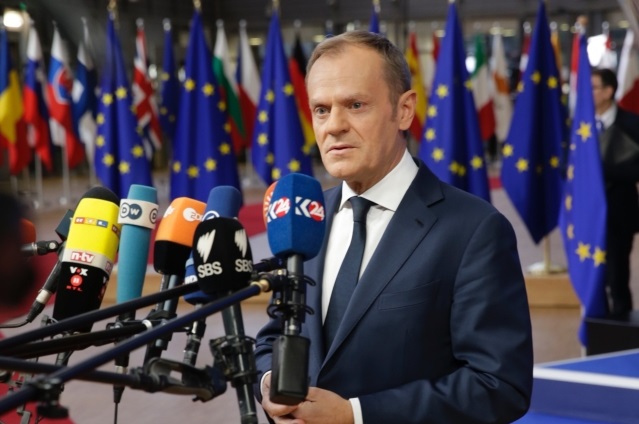 A move by European Council President Donald Tusk to review the mechanism of mandatory quotas for the redistribution of asylum seekers has created a stir in the EU with Migration Commissioner Dimitris Avramopoulos calling it “unacceptable and anti-European” and that it “undermines the principle of solidarity”.

Avramopoulos’ reaction was ignited by news reported in the Guardian that Tusk had attached a background note to the letter he sent to EU leaders and government ahead of the current EU summit on migration, in which he shelves the mandatory relocation quotas mechanism — a basic part of the EU’s migration strategy — suggesting that it has been unsuccessful.

According to Avramopoulos, the text “ignores the work we have done together in recent years”.

“I am in total disagreement… we must be together and not feed anti-EU positions,” said Avramopoulos, who underlined that the quota strategy has achieved the relocation of 90 percent of the people meeting the requirements. First Vice-president of the Commission Frans Timmermans backed this up: “It’s not true they do not serve.”

The Commission further noted that “returning to a pre-crisis mode of isolated uncoordinated national actions is not an option”.

In the meantime, in an effort to ease the newly increased flow of migrants to the Greek islands, the Greek government is set to table in parliament next week an amended law on the asylum process aiming to accelerate the process of returning migrants to Turkey.

Indicatively, Greece’s asylum service said this week that it had processed 33,021 applications for asylum since March 2016, when Ankara and the European Union signed a deal which is being inadequately enforced.

“For Greece, it is not an issue of whether partners will host 200 or even 1,000 people, but that they insist on undermining the principles on which the EU is based,” Prime Minister Alexis Tsipras said during the European Council summit on Friday, underlining that “Greece has respected EU rules and other member states’ issues as well as keeping to European solidarity”.