On Tuesday, December 12, a special ceremony in honor of Greece was held by the New York Stock Exchange in cooperation with Capital Link, an advisory, investor relations and financial communications firm. The event, entitled “Greek Day at NYSE”, was held within the context of the 19th Annual Capital Link Invest in Greece Forum organized that took place in New York on Monday, December 11. 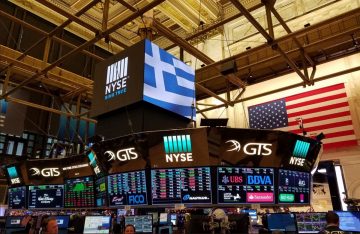 With the Greek flag hanging on Wall Street, the ceremony was held during an official reception in honor of the Greek Delegation and the Greek companies listed on the New York Stock Exchange and companies that participated in the 19th Capital Link Forum.

As part of the special event, Greek Minister of Finance Euclid Tsakalotos rang “The Closing Bell”, ending the trading session (photo above).

“The active support and participation of NYSE, the world’s largest stock exchange, enhances the prestige and the visibility of the Forum and of Greece to a wide international investment audience. It also shows the stable support to Greece, the Greek companies, the Greek shipping industry and the Diaspora,” Capital Link said in an announcement.

While in New York, Minister Kountoura attended a panel discussion at the 19th Capital Link Forum and informed international investors that the Greek government now provides a friendly and attractive environment for new investments. She also held a press conference for journalists and Greek media correspondents and gave a series of interviews to New York TV and Internet media to promote Greek tourism.