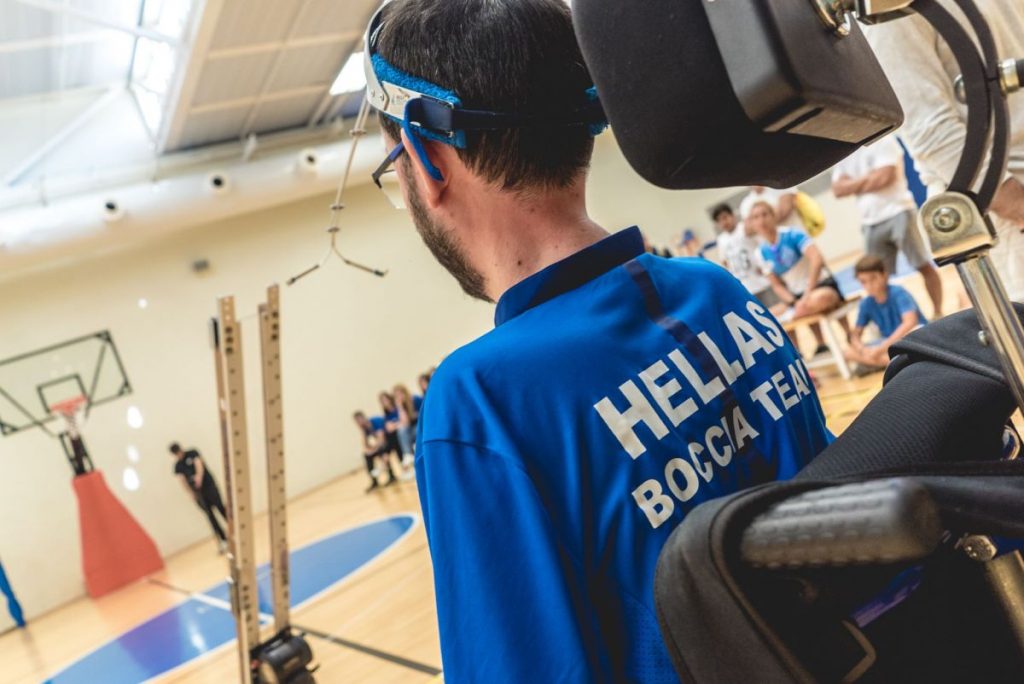 In 2015, Paralympic athlete Grigoris Polychronidis was invited by his sponsor Allianz to demonstrate the sport of Boccia at the “Navarino Challenge” sports tourism event held annually in Messinia and Costa Navarino in Greece.

However, the impressions both the sport and the athlete left on the audience was such that it became an annual demonstration. Since then Boccia is included among the many activities offered during the event.

Polychronidis, a holder of four Paralympic medals, was deemed an ambassador of the “Navarino Challenge” and each year gives lessons of Boccia to event participants and also spreads the word on the event’s goals.

“Events like ‘Navarino Challenge’ promote Greece and can contribute to the tourism and economic growth of the region.”

During October 13-15, in Messinia and Costa Navarino, Polychronidis took part in “Navarino Challenge” for the third time. In its fifth year, the three-day Greek sports tourism event, which this year attracted athletes from 17 countries, was once again deemed a success and offered a full program that included 16 sports activities. The event promoted the Olympic Spirit and “fair play” through the participation of role-model athletes, reinforcing the message against childhood obesity through exercise and the Mediterranean diet.

“‘Navarino Challenge’ is an event that promotes all the virtues of sports,” Polychronidis told GTP Headlines.

Ambassador to the event for the third year, Polychronidis told us that he is proud to share his passion and get people involved in the Paralympic movement.

“People of all ages celebrate together on one of the most beautiful places on earth, Messinia — Pylos and Costa Navarino — and I am proud to share all my knowledge, my experience and mostly my passion with all of them, while also getting them involved in the Paralympic movement and the amazing sport of Boccia,” he says.

But what exactly is the sport of Boccia? Polychronidis introduces us to the sport and underlines the amazing connection between people and sports through “Navarino Challenge”.

“I started training Boccia in 2001. My main motivation to get involved with the sport was the ‘Athens 2004’ Paralympic Games. Competing in these Games was a dream come true.”

GTP: Please explain the sport of Boccia to our readers. How did you get involved in the sport?

Grigoris Polychronidis: Boccia is a Paralympic sport, similar to Petanque and Bowls. It is a strategy game played with six red, six blue and one white ball which is the target. The opponents try to get their colored balls closer to the white ball, by blocking one each other and trying to move other balls with their balls in order to complete their strategy. Each match consists of four ends. Whoever gets more points during the four ends is the winner.
I started training Boccia in 2001. My main motivation to get involved with the sport was the “Athens 2004” Paralympic Games. Competing in these Games was a dream come true.

GTP: Please share some career highlights with our readers.

Grigoris Polychronidis: I have won four Paralympic medals — Gold in London 2012, Silver & Bronze in Rio 2016 and Silver in Beijing 2008. I have also won 16 medals in World and European official competitions since 2006. Due to these results, I have been on the 1st place of the World Ranking list for 6 years (2007-2009, 2011-2013). Currently I am No 2 out of 131 athletes of my category. In 2017, I won a Gold and a Bronze medal in World competitions and a Bronze medal in a European. These medals, will most probably get me on the 1st place of the upcoming World Ranking list. I had also the honor to be the flag bearer of the Hellenic Team in the Opening Ceremony of the Rio 2016 Paralympic Games.

“I am happy to have every year more and more young people getting involved with Boccia demonstrations at ‘Navarino Challenge’.”

GTP: How important is the fact that the values ​​of the Olympic Spirit and “fair play” are promoted through a sports tourism event, such as “Navarino Challenge”?

Grigoris Polychronidis: The importance of promoting the values of the Olympic Spirit and “fair play” is very significant, since there are many children involved in the event. After all, children are the future and it is an obligation for all of us to provide them the bright side of sport and teach them to become good athletes with principles and values.

GTP: What do you enjoy most about being an athlete and about playing Boccia? How popular is the sport at “Navarino Challenge”?

Grigoris Polychronidis: What I mostly enjoy being an athlete is the feeling of competing and giving all the efforts in order to win. You have to train hard every day in order to get better and better, and when you manage to win, the feeling is indescribable.
I am happy to have every year more and more young people getting involved with Boccia demonstrations at “Navarino Challenge”.

GTP: This year, for the first time at “Navarino Challenge”, Boccia was held under the auspices of the Hellenic Paralympic Committee. How important was this for your sport?

Grigoris Polychronidis: It is very important for the promotion of Boccia, all the actions that are made, to be promoted by as many as possible organizations. The Hellenic Paralympic Committee during all these years is promoting all Paralympic sports and growing the movement in Greece.

“…Anyone who gets involved with Boccia becomes a fan.” 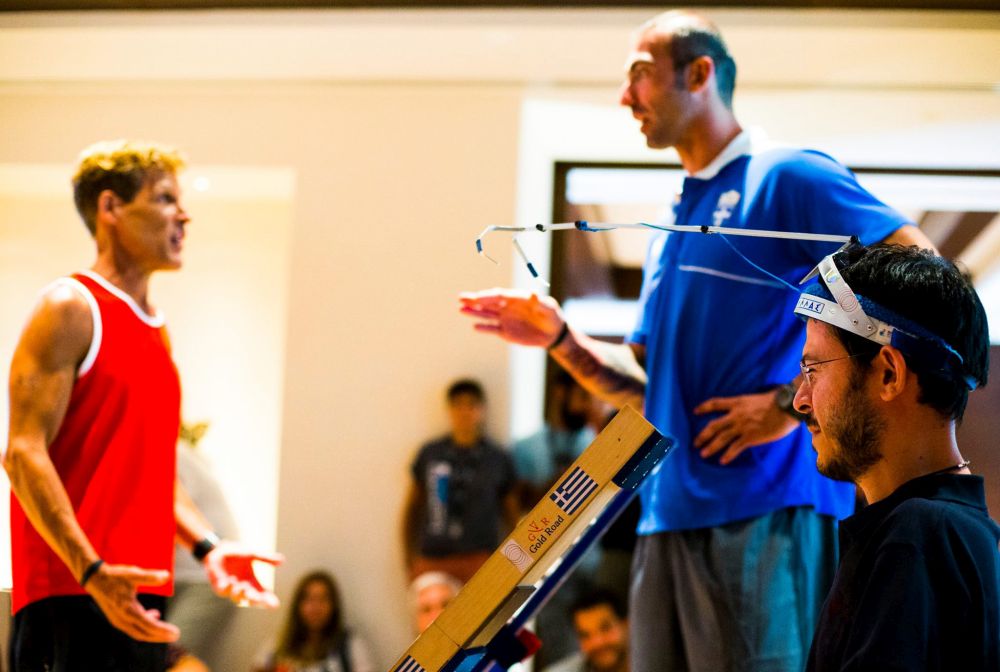 GTP: In general, how do people respond to the sport of Boccia? Does it have a mainstream audience?

Grigoris Polychronidis: Boccia is not yet a popular sport. It is very pleasant, though, that anyone who gets involved with Boccia becomes a fan. It is a fact that Boccia is the most growing sport in the Paralympic movement.

GTP: According to research, Boccia has roots in Greece (players threw large stones at a stone target). How widespread is the sport today? Which countries have the best infrastructure for this sport?

Grigoris Polychronidis: Boccia is growing rapidly. More than 50 countries are developing the sport and each year we have new countries competing in international competitions. The International Paralympic Committee as well as the Boccia International Sport Federation are running programs for Boccia in developing countries.

GTP: What is your advice for disabled people interested in athletics or considering taking up Boccia?

Grigoris Polychronidis: I always say to everyone to get involved in sports, because it will help to develop an integral personality and get stronger to overcome all the obstacles.

GTP: As an ambassador of the event, tell us what would someone gain from his/her participation in Navarino Challenge? Wait have you, personally, gained?

Grigoris Polychronidis: Getting in touch with sports is an amazing feeling. I believe that everyone who have participated in any kind of sport, has a different view of life. “Navarino Challenge” is an event that offers a beautiful contact between a person and a sport.

GTP: Do you believe that the sports tourism event “Navarino Challenge” can add to Greece’s appeal as a tourism destination and why?

Grigoris Polychronidis: “Navarino Challenge” offers the excitement of sports in the beauty of one of the best hotels and locations in Greece. This is a strong combination that is very attractive for everyone to enjoy. It is a fact that events like this promote Greece and can contribute to the tourism and economic growth of the region.

Organized by Active Media, the 5th “Navarino Challenge” was held under the auspices of the Greek National Tourism Organization and supported by Costa Navarino and The Westin Resort Costa Navarino and the Municipalities of Pylos-Nestor and Trifilia.