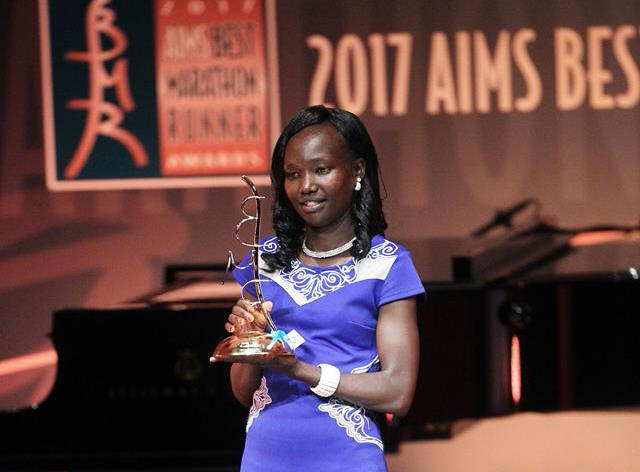 Kenyans Eliud Kipchoge and Mary Keitany were named the 2017 AIMS Best Marathon Runners (BMR) of the Year during the fifth annual awards gala of the Association of International Marathons and Distance Races, held at the Athens Concert Hall on Friday, November 10.

The 2017 awards ceremony took place during a gala organized by AIMS and the Hellenic Athletic Federation (SEGAS) and was included in the events of celebrating the “Athens Marathon. The Authentic” that led to Sunday’s 35th marathon held on the historic and unique course (42,195-meter) with 18,500 marathon runners from more than 101 countries.

For the third time in a row, long distance runner Eliud Kipchoge was announced as AIMS Best Marathon Runner. In September Kipchoge confirmed his position as the world’s number one marathon runner by taking a win in the BMW BERLIN-MARATHON. The Kenyan clocked a world leading time of 2:03:32.

In the woman’s group, Kenya’s Mary Keitany has been recognized with the AIMS World Record Award.

Mary broke the women’s only Marathon world record by 41 seconds at the Virgin Money London Marathon in April in a time of 2:17:01.

This is the fourth time AIMS has presented an award to Keitany.

Born in Porto, Portugal in 1958, Mota first came to international attention in 1982 at the European Championships where she won the first official international championship marathon for women, staged on the classic course from Marathon to Athens.

In total, Rosa competed in 21 marathons in her career, winning 14.

The fifth annual AIMS ‘Best Marathon Runner’ (BMR) Awards Gala also included the AIMS Green Award, which was awarded to the Sanlam Cape Town Marathon in recognition for promoting environmentally friendly practices; and the AIMS Social Award, which was given to the Medellin Marathon for supporting social purposes.

The Greek Travel Pages (GTP) is a communications sponsor for the 35th Athens Marathon. Τhe Authentic.

Kountoura Runs for Tourism at 35th ‘Athens Marathon. The Authentic’