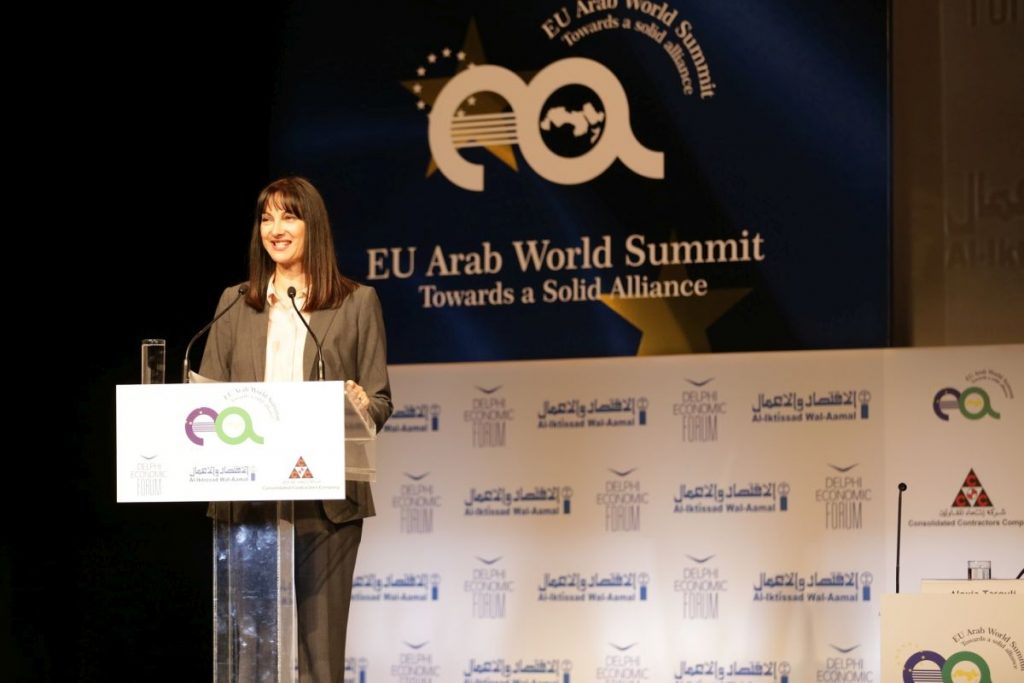 Leading Arab groups have launched significant investments in the Greek tourism market, due to the sector’s growth in recent years, according to Tourism Minister Elena Kountoura.

Speaking during the 2nd EU-Arab World Summit “Towards a Solid Alliance” on Friday in Athens, the Greek tourism minister presented the significant investment opportunities Greece has as a world attractive 365-day tourism destination.

According to Minister Kountoura, due to the high growth rates of Greek tourism, new opportunities are emerging and investment interest has increased sharply from international funds, including from the Arab countries.

“Historical and long-term bonds of trust and friendship connect Greece with the Arab countries, the minister said.

“As a member state of the European Union, we seek to strengthen these relations and to extend them to all levels, and of course also to tourism,” she said.

Kountoura informed that opening to the Middle East tourism markets and promoting new partnerships with the Arab world, is a strategic choice of the tourism ministry.

“We support new collaborations, synergies and investments that will bring economic and development benefits to all of Greece, but also to tourism in the wider region during the next years,” she said, adding that tourism is a dominant development force that drives progress and prosperity.

According to the tourism ministry, Greece has been recording double-digit growth in the number of inbound tourists from the Arab countries since 2016, due to the national tourism policy. “A positive momentum is recorded for 2018 and the following years,” the ministry said.

Aiming to boost ties with the Arab world, the tourism ministry since 2015 has launched targeted actions to develop bilateral tourism initiatives, to hold tourism forums for the development of partnerships in the private sector, to boost the presence of the Greek National Tourism Organization in leading tourism exhibitions and to accomplish a dynamic promotion of Greece in the Arab tourism markets.

The EU-Arab World Summit, held November 9 – 10, was held in the Greek capital on the initiative of the Greek government, with view of providing the most representative and dynamic platform for debating strategies of Euro-Arab cooperation and partnership between the two major economic and political blocs.