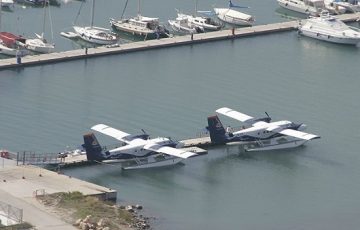 A 10-seater Quest Kodiak seaplane landed on Corfu last week in a series of test runs to neighboring islands ahead of the highly-anticipated official opening of the island’s waterway.

The company, which has also undertaken the licensing procedure of 34 waterways across Greece, said it plans to launch regular flights from Corfu in the spring initially with two aircraft to reach 20 in the future.

However, there are currently only three licensed waterways in the country – on Corfu, Paxi and in Patra, while continuous delays in passing a draft law that will foresee the operation of a waterway network in Greece is still on the back-burner.

“This battle started seven years ago and today is the first test flight in Greece and especially on Corfu. Our goal is to launch flights from the coming tourist season, but of course this will depend on whether the state operates at the same speeds,” said CEO K2 Smart Jets Andreas Karotsieris.

Lamda Says Hellinikon ‘Cannot Be Materialized’ Due to Double Talk