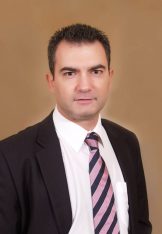 Christos Dimas has been appointed as the general manager of the Meliá Athens Hotel, located in the center of the Greek capital.

Christos has been working in the hospitality sector for the last 25 years and has served as a senior executive in major hotel units.

“My presence at Meliá Athens Hotels is a pleasant challenge,” Christos said. “Our aim is to continue to satisfy our visitors every moment, by providing them with modern high-quality hospitality services,” he said.

Christos holds a bachelor’s degree in marketing and hotel management and a master’s degree in strategic business administration from the Hellenic Management Association (EEDE).

In 2007 he took over as general manager of the Star Hotel group, which includes Volos Palace, Xenia Portaria and Café Veranda in the area of Magnisia.

Christos has taught at the Metropolitan College. He is married and has two sons.