Athens-based Air Mediterranean is gearing up for the launch of its first flights from Athens International Airport (AIA).

“We are all excited to bring the world to Greece and bring Greece to the world, or as we fittingly like to say: Fly Mediterranean Hospitality Around the World,” the carrier’s director, Andrew Hallak, said during an event in Athens.

As of November 2, the Greek carrier will be flying from Athens to London, Stockholm and Baghdad.

According to Hallak, Greece offers an airline with Air Mediterranean’s vision, many advantages.

“Our hope is to utilize Greece’s strategic location as a centralized European hub conveniently connecting East and West, and North with South. Athens is perfectly situated in the center of it all, literally connecting Europe, the Middle-East and Africa,” he said, adding that Athens International Airport is the perfect hub for the airline’s base as it offers the infrastructure and support needed for a growing airline “with our vision”.

‘Creating connections all year round for under-served routes’

Speaking to GTP Headlines, Hallak said that all connections will be all year round.

“The concept here is to establish a connectivity throughout the year, as it is not just banking on the summer peak season, but it is creating convenient connections all year round for under-served routes,” he said.

According to Hallak, the airline is starting off with the six destinations and “perhaps a couple of surprises” and towards the end of March the aim is to increase frequencies and also introduce new routes as well. 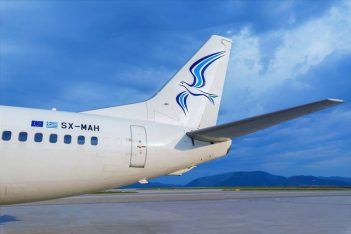 “We are looking to reach places that we feel perhaps are underserved.. We are looking forward to be able to serve these markets,” he added.

Owned by entrepreneur George Hallak, Air Mediterranean operates a fleet of two Boeing 737 aircraft. On November 15, the company will receive another aircraft.