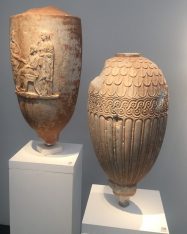 The Culture Ministry in Athens on Thursday announced that it will claim two stolen ancient Greek vases of the classical period that were recently offered for sale in London.

The two marble vases, also known as “lekythoi”, date back to the 4th century BC.  According to The Guardian, the vases were put on sale at the Frieze Masters art fair in London on behalf of the Swiss canton of Basel-Stadt, which is seeking revenue it is owed after the liquidation of the assets of convicted illegal antiquities trafficker Gianfranco Becchina, a former resident.

The Greek authorities were alerted to the lekythoi’s presence by Interpol, while the Ministry of Culture now says it will continue its efforts for the repatriation [of the antiquities] “using all appropriate means”.