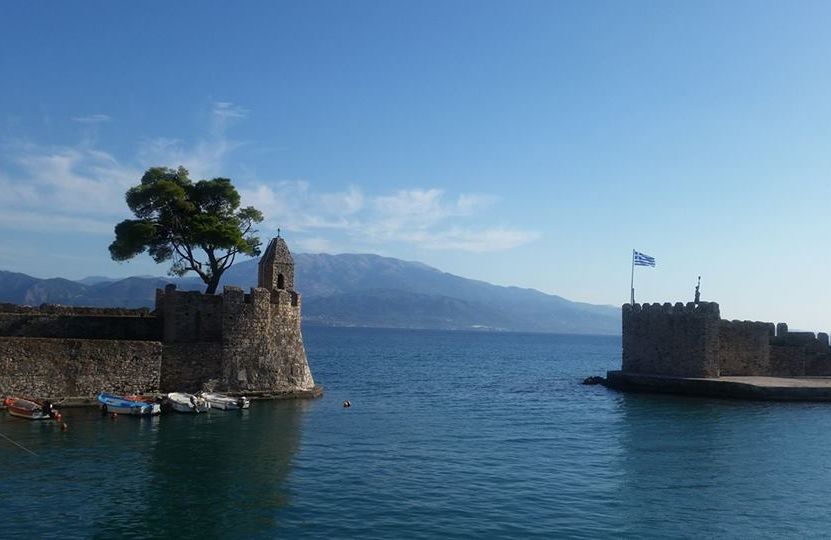 The port of Nafpaktos has the shape of a horseshoe with an opening of 35 meters. Left and right to the entrance are two towers.

“The philosophy of this exhibition is to show that you will find tourism forms under every stone you turn in Greece.”

The Municipality of Nafpaktos is going forward with a plan focused on alternative forms of tourism to extend its season to 52 weeks, according to the Greek town’s mayor, Panagiotis Loukopoulos.

“Nafpaktia (Nafpaktos) is one of the most typical examples of the opportunities alternative forms of tourism can offer,” Mayor Loukopoulos said on Friday, the first day of the Nostos Expo 2017 trade show which opened in the coastal town of Nafpaktos in Western Greece.

In its second year, the exhibition is organized by the Municipality of Nafpakos and is promoting the active, explorer and adventure travel options available in the town and the country until Monday, October 16.

“In 2016, we launched an effort to make the Nostos expo a reference point for Greek tourism and especially alternative forms of tourism. The increased interest that exists gives us the drive to continue this effort,” he informed journalists during a press conference held on the sidelines of the event.

The aim of the exhibition focuses on introducing Greece’s alternative tourism side to visitors and foreign travel agents (hosted buyers) and contributing to establishing Greece as an all year round destination.

Some 170 exhibitors from all over Greece, up from 90 last year, are presenting their products that refer to alternative tourism forms such as thermal springs, hiking, trekking, sports and gastronomy.

“This year’s event has two goals: for each exhibitor and visitor to leave more wiser than they came in terms of alternative tourism and for the Greek companies taking part to make business deals with the 45 hosted buyers from abroad that specialize in this form of tourism,” said the Deputy Mayor of Nafpaktos and head of the Nostos expo organizing committee, Yiannis Sypsas.

“The philosophy of this exhibition is to show that you will find tourism forms under every stone you turn in Greece,” he added.

During the inauguration ceremony of Nostos 2017, the exhibition was applauded by Secretary General for Tourism Policy and Development Giorgos Tziallas as its concept follows the plan of the Tourism Ministry to establish Greece as a 365-day destination.

“This exhibition is among the major efforts that must be supported,” Tziallas told GTP Headlines on the sidelines of Nostos 2017, adding that the tourism ministry has the programs and know how to help municipalities on how to develop programs for alternative tourism that includes thematic forms such as theme parks, agrotourism, spa tourism and cultural tourism.

“For all these forms we have the possibility to extend the tourism season and make the world known destination of Greece, a country to visit 365 days a year… There is nothing more important and hopeful that making our tourism stronger now that we are coming out of the crisis,” he added.

The second Nostos exhibition also has the support of the Region of Western Greece.

“We have a plan for upgrading the tourism product as we are a region where history, culture, geography, natural landscape, lakes, coastlines and uniqueness give us a great advantage in alternative tourism,” the Prefect of Western Greece, Apostolos Katsifaras, told GTP Headlines.

“We are building this tourism product methodically and we have proceeded to a more specific tourism promotional plan,” he said, adding that with the new tools such as the EU’s Leader program and through NSRF funds, the region aims to have a competitive tourist product in the alternative tourism industry.

The Nostos 2017 expo is set up in a specially designed space in Nafpaktos town and is serving as a communication platform for Greek professionals to present their products through pre-scheduled B2B meetings with 45 hosted buyers (up from 31 last year) from European countries including Germany, France, Switzerland, Austria, Hungary, Denmark, Sweden, Russia, Ukraine, Belarus, Croatia, Serbia, Romania and Turkey. Moreover, also attending are representatives from Greece’s offices dealing with incoming tourism in major markets such as the United States, Canada, China and India. According to the organizer, some 3,000 B2B meetings have been scheduled.

On the sidelines of the exhibition, a series of conference sessions are scheduled, focusing on the prospects and opportunities of alternative tourism in Greece. The speaker lineup features representatives of agencies and organizations and specialized business executives from Greece.