“We have been in Greece for 40 years and we will continue to be for 40 more.” – Fritz Joussen, TUI Group Executive Board Chairman

Travel giant TUI on Friday announced that it will expand its presence in Greece with the opening of 10 new five- and four-star hotels addressed to upscale markets and by adding more visits from cruise ships to Greek ports.

During the meeting, key issues discussed included improving infrastructure (airports, ports, road network) to further develop Greek tourism, expanding the season and linking tourism with other productive sectors of the Greek economy, such as agriculture and primary production, for the benefit of local communities.

“Greece is one of the winners of the 2017 summer season. The tourism sector is one of the most important employers for the country”, said Joussen, following his meeting with the Greek PM.

TUI increased the number of visitors to Greece this summer by around 10 percent to 2.5 million that were carried on some 10,000 flights. Cruise passengers from TUI’s three cruise lines — Hapag Lloyd Cruises, TUI Cruises and Thomson Cruises — to Greece this year were up 20 percent. TUI’s cruise lines visit 26 Greek ports.

According to TUI, Greece this year is the second most popular destination for its customers behind Spain.

TUI: Infrastructure and stability are essential

During a press conference held at the Museum of Cycladic Art with Greek Tourism Minister Elena Kountoura, Joussen said that TUI sees excellent prospects for the operation of new hotels on the Greek islands and the Peloponnese, as well as the development of winter tourism in Northern Greece, if infrastructure is developed and there is stability in the country.

“We want to invest in hotels and harbor infrastructure and therefore we need to have conditions. The ‘best friend’ of investments and money is stable conditions,” Joussen added. 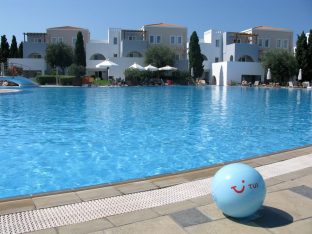 TUI already operates 32 of its own hotels in Greece that include 8,500 rooms and cooperates with a great number of hotel partners. As part of its planned investments, the group recently purchased a plot of land on Crete as the site for its Robinson Club brand (the third in the country), while a new TUI Sensatori brand hotel will open on Rhodes in early summer 2018.

“We have been in Greece for 40 years and we will continue to be for 40 more, TUI’s CEO said, adding that the company is a partner to Greece.

TUI’s investment plan for Greece focuses on combining beach holidays with culture and creating authentic experiences. According to Joussen, 31 percent of the demand for Greece is due to the interest of tourists in Greek culture.

“We are selling destinations, not just hotels… Creating experiences (for tourists) is what counts,” Joussen said, adding that the company’s various hotel brand concepts focus on creating and offering local experiences to its customers.

“Our customers that choose Greece are searching for authentic experiences,” he said.

Joussen said that TUI is interested in expanding the tourist season in Greece in order to keep the company’s hotels and shops open longer, wherever possible.

“The beauty of our business model is that we not only bring customers but we invest in hotels, we have destination management companies and we have 150 planes… So if you want to open Crete (for example) for a couple of more months, we can,” he said, underlining that shops and restaurants must also stay open in order for the season to continue.

“We need a master plan for certain destinations, for all seasons,” Joussen said.

Minister Kountoura: We have an ‘excellent’ cooperation with TUI

“After two and a half years of excellent cooperation, we are confident and consistently promoting strategies for further developing tourism in Greece as a 365 days a year destination and promoting investments that will develop the Greek economy,” Minister Kountoura said during the press conference.

Underlining the “excellent” cooperation the ministry has with TUI, she presented the framework and goals of the partnership that include new tourism investments of high added value, the promotion of new Greek destinations, the promotion of thematic experiences across the country and the further development of cruise tourism.

TUI this year extended its offer to holidaymakers in the summer season and also included additional flights from Germany to Kos, Crete and Rhodes in its 2017 summer schedule. The company also launched new products in Greece, such as the TUI Collection (a set of exclusive excursions aimed to give guests a taste of traditional Greek hospitality), and is also running a project on Crete to establish the island as a destination for sustainable catering on holiday.

Under the name “TUI Cares for Crete”, the project networks local producers (agriculture and wine-growing) with hoteliers and the tourism sector in order for more local products to find their way into the island’s holiday resorts. Currently, 200 local companies, olive-growers and winemakers in Crete are participating in the project. 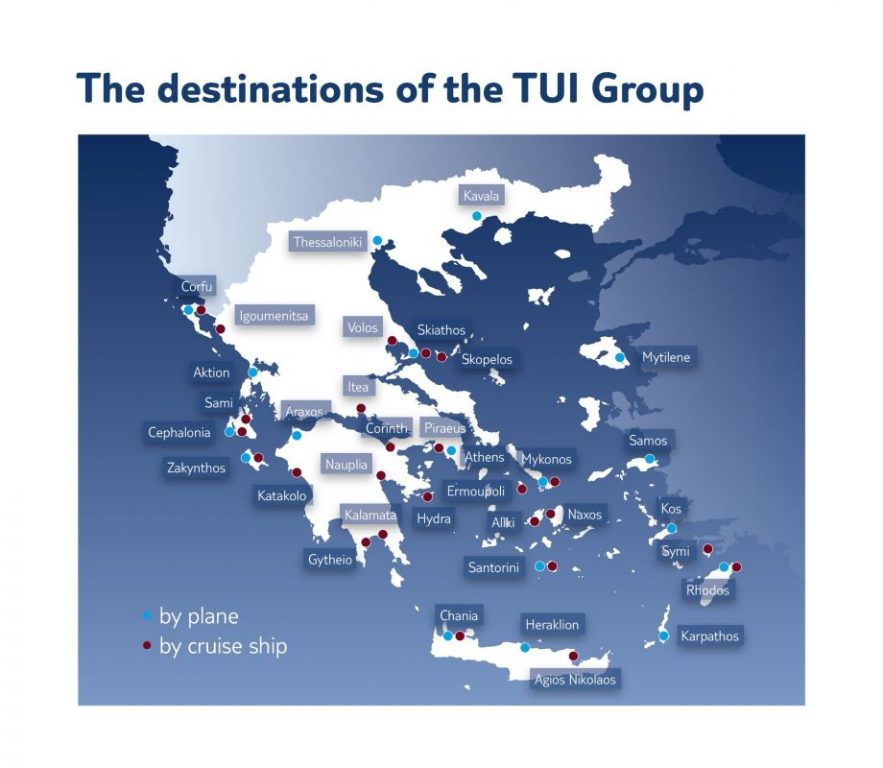