It’s a done deal, the Greek island of Syros will get its very own film school set to start classes next month, as local authorities make the final preparations for a 6.5-million-euro investment to establish a Hollywood studio on the island. 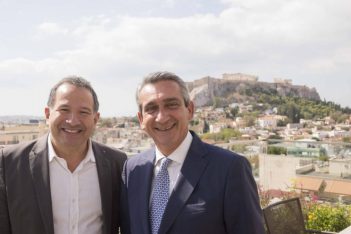 Bernstein, to head the studio, told the press that the government’s decision to pass a bill in parliament harmonizing  the country’s legislative framework for film production with relevant EU legislation is an “encouraging step”, confirming that classes at the Syros film school will begin next month.

However, Bernstein was quick to point out that there is still a long way ahead towards the creation of a suitable environment that will place Greece – as an attractive and competitive option – on the map of countries hosting international film productions.

Leontaritis had presented the proposal for the establishment of a permanent film studio on the Cycladic island to be headed by Bernstein and his team late last year, underlining the financial and promotional benefits for the island and its residents as well as for the Cyclades and the South Aegean.

According to research agency Tourism Competitive Intelligence, in 2012 some 40 million tourists chose to vacation at a specific destination after seeing it in a film.

“The South Aegean islands… have yet again opened a new window of hope… solutions, job creation and tapping into opportunities can occur only after very hard work,” said Hatzimarkos.