Incoming tourism in Athens is picking up strongly as visitors are expected to reach the record number of 5 million by the end of 2017, Athens Mayor Gorgos Kaminis said on Monday during a press conference held on the first day of the Travel Trade Athens 2017, the Greek capital’s signature annual trade event that aims to strengthen tourism for the financial revitalization and development of the city.

According to Mayor Kaminis, the record number of tourists this year will be the result of coordinated actions that have put Athens among the top of the choices of foreign travelers.

In its fifth year, the Travel Trade Athens 2017 event kicked off at the Hotel Grande Bretagne under the organization of the Athens Development and Destination Management Agency (ΕΑΤΑ) through the Athens Convention and Visitors Bureau (ACVB) and the European Tour Operators Association (ETOA).

During the press conference, the mayor underlined the importance of promoting modern Athens through events such as the Athens Marathon and showcasing the Greek capital as a vibrant city that offers many things to experience. He then referred to Athens’ recent distinction of “Best Emerging Culture City of the Year” by the Leading Culture Destinations Awards (LCDA). 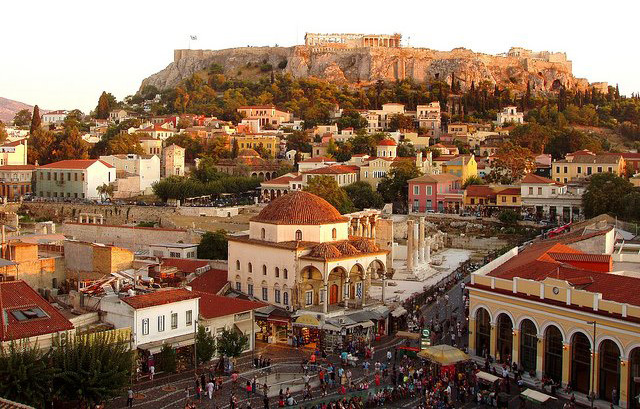 He also underlined that the documenta 14 art show, hosted in Athens between April 8 and July 16, attracted more than 340,000 visitors and that such activities could extend the tourism season for the capital.

“We believe that 2018 will be a good year as well,” the mayor said, adding that Athens has been named “World Book Capital” for 2018, a major distinction from UNESCO.

“It is certain that next year all eyes will be on Athens,” he said.

Another event expected to boost visitors to the Greek capital is the “ASTA Destination Expo 2018”, the international conference of the American Society of Travel Agents (ASTA), to be held April 14-17.

The event will be held in Athens cooperation with the Greek Tourism Ministry and the Federation of Hellenic Associations of Tourist and Travel Agencies (FedHATTA).

“We have 8,000 people that can and do sell Greece… We are working very closely here in Athens and with partners all over Greece to bring here at least 500 people that sell travel so that they can experience it and share it with their clients,” said ASTA Vice President of Business Development, Robert Duglin, adding that the association hopes to continue to increase Greece’s tourism numbers from the US.

ASTA’s members sell to independent travellers, groups, businesses and MICE professionals. More than 80 percent of all travel agency sales are made through ASTA members.

“We are going to work hard to increase tourism from the US here to Greece,” he said and thanked Mayor Kaminis for the “outstanding job” he’s done in making Athens a vibrant city that people want to travel to from all over the world and the US.

On his part, the Secretary General of the Greek National Tourism Organization, Konstantinos Tsegas, referred to the Tourism Ministry’s strategy for establishing Greece as a 365 days a year destination.

“There is a misconception about tourism in Greece. The fact that we have about 280 days of sunshine a year has created the false impression that Greece is only and hence Athens, a destination only for summer holidays. That is half the truth as our country has to offer inexhaustible options of recreation, both on mainland and island Greece,” he said.

Aiming to get the word out, the GNTO this year has held 35 familiarization trips with over 200 specialized travel journalists and bloggers.

City of Athens Signs Memorandum of Cooperation with ASTA, HATTA

During this year’s Travel Trade Athens, some 100 hosted buyers from a number of countries, representing tourism organizations and agencies, conference and event organizers are scheduled to have B2B meetings with 140 Greek tourism professionals from Athens other areas of Greece and explore new collaborations.

According to the City of Athens, some 3,000 B2B meetings are expected to take place, bringing the number of meetings between foreign buyers and Greek suppliers to 9,500 since the launch of Travel Trade Athens five years ago.

Travel Trade Athens 2017 will wrap up on Tuesday, October 3.

The Greek Travel Pages (GTP) is a media sponsor of the 5th Travel Trade Athens.