Greece scooped the “Best Video in Europe” award for 2017 at the second World Tourism Organization (UNWTO) Tourism Video Competition with its “Greece – A 365-day Destination” video.

Produced by the Greek National Tourism Organization (GNTO), the winners of the competition were announced during a special event held on the sidelines of the 22nd UNWTO General Assembly in Chengdu, China. 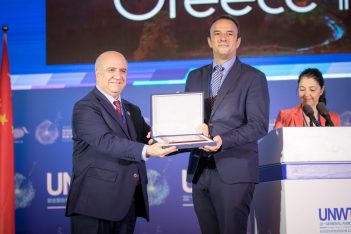 The diplomatic advisor to the Greek Tourism Minister, Michail Angelopoulos (right) receiving the award for “Best video in Europe”.

“Greece – A 365-day Destination” was selected as the top promotional video of a European destination, among 23 candidate European countries that participated in the global competition.

Greece’s video was voted as the best in Europe by a jury consisting of the chairs of the UNWTO’s six regional commissions – Africa, the Americas, East Asia and the Pacific, ‎Europe, the Middle East and South Asia.

“Implementing the communication strategy of Tourism Minister Elena Kountoura for the promotion of Greece as a world-renowned destination 365 days a year, the 3:36-minute film ‘Greece-A 365-Day Destination’, directed by Antonis Theocharis Kioukas, focuses on the images, sounds and colors of Greece during the four seasons of the year,” an announcement by the Tourism Ministry said on Friday.

The award was received by the diplomatic advisor to the Greek Tourism Minister, Michail Angelopoulos and the head of the Directorate of Strategic Planning at the Tourism Ministry, Spyridon Parthenis.

The UNWTO established the competition to award outstanding country promotional videos recognizing the significant importance of multimedia in marketing tourism destinations. One prize is given to each UNWTO region.

The GNTO’s success follows Greece’s election for the first time to the Executive Council of the UNWTO for the 2018-2021 period.