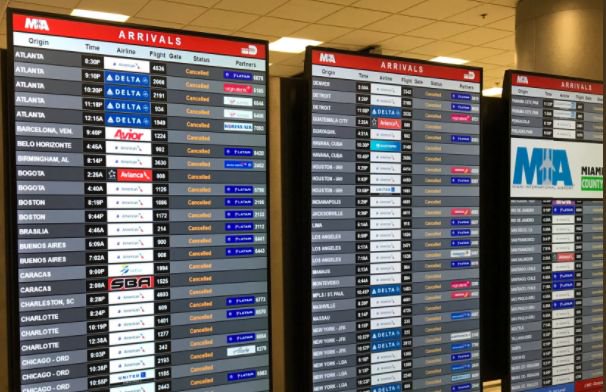 Three of Florida’s busiest airports — Miami, Fort Lauderdale and Orlando — are among those that have announced flight suspensions as Hurricane Irma gets close toward the state. Hurricane Irma has been dubbed the most powerful Atlantic storm in a decade.

At 9:50 p.m. on Friday, Miami International Airport (MIA) airport said on Twitter: “Last flight has departed from MIA. There are no scheduled flights for Saturday and Sunday.” It is not certain whether flights might resume on Monday. The airport of Fort Lauderdale (FLL) halted all commercial flights as of Friday evening and all airline flights at Orlando (MCO) will halt starting at 5 pm on Saturday.

Passengers traveling through other airports in Florida through September 11 should contact their airline to get the most current information about flights that may be impacted by Hurricane Irma.

According to the latest National Hurricane Center’s advisory, Irma has been downgraded to a Category 3 hurricane, with sustained 125-mph winds.

The core of Irma will continue to move near or over the northern coast of Cuba on Saturday. According to a CNN report, Irma will reach the Florida Keys on Sunday morning and the southwestern coast of Florida on Sunday afternoon. “Irma is expected to make landfall in Florida as an extremely dangerous hurricane,” CNN said.

At a news conference on Saturday, Florida Gov. Rick Scott, underlined that “Millions of Floridians will see major hurricane impacts with deadly storm surge and life threatening winds”. He advised residents in an evacuation zone to leave immediately.

“If you have been ordered to evacuate, you need to leave now. Do not wait. Evacuate. Not tonight, not in an hour. You need to go right now.

According to the latest information, Hurricane Irma has killed 22 people in the Caribbean and left thousands homeless.

Meanwhile, as Irma is on its way to Florida, two other storms in the region have been upgraded to hurricane status: Katia in the Gulf of Mexico and Jose. The latter storm is following Irma in the Atlantic and has made landfall in eastern Mexico.