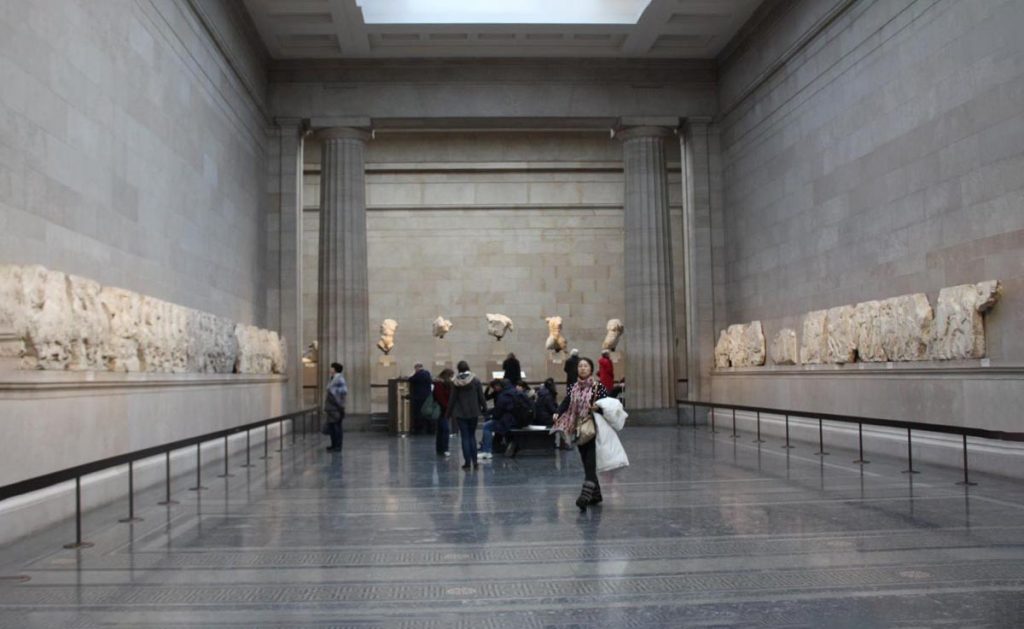 The idea of linking the return of the Parthenon Marbles to Greece with the Brexit negotiations is not finding support by advocates of the cause in London.

According to German newspaper Die Welt, entitled “Brexit vs. Marble Frieze,” in the context of negotiations on Britain’s exit from the EU, the Greek Parliament could demand the return of the Parthenon Marbles from the British Museum to Athens. “Ratification of any agreement between London and Brussels for the next day of Brexit will require the ratification by the national parliaments of the other 27 EU Member States,” the report says.

The renowned Caryatids in the Acropolis Museum. The figures were originally six but one (below, left) was removed by Lord Elgin in the early 19th century and is now in the British Museum in London. The pedestal for the Caryatid removed to London (second from the left on the front) remains empty.

As the report underlines, the proposal, however, is inconsistent with the strategy that has so far been followed by Greek governments, which is based on cultural diplomacy and pressure on the British Museum by engaging public opinion and personalities of public life and politicians in Britain and elsewhere.

According to UK reports, advocates in Britain in favor of the reunification of the sculptures have noted that such a move by the Greek side would be perceived as “blackmail” and would undermine the moral advantage already gained on the issue.

A Caryatid in the British Museum.

“I think involving the marbles in the horribly complex Brexit negotiations would be a bit silly,” she said. Referring to the EU referendum, Dame Janet added: “Great art was as far from the question posed to the people as anything I can think of. This is entirely another question, a question of aesthetics, honesty and colonial morality. It would be like putting apples and pears together.”

Suzman’s statement was in reference to SYRIZA MEP Stelios Kouloglou’s request to the European Commission on the issue of Britain returning the Parthenon Marbles through Brexit negotiations.

On its part, the British Museum issued the following statement: “The Acropolis Museum gives the opportunity for the Parthenon Sculptures in Athens (about half of that surviving from antiquity) to be valued against the background of Athenian history. The Parthenon Sculptures in London are an important representation of ancient Athenian culture in the context of world history. ”

For over three decades, Greece has repeatedly called on the British Museum to return the 2,500-year-old marble sculptures that once adorned the Parthenon and have been the subject of dispute since they were illegally removed and sold by Lord Elgin to the British Museum in 1817.