The wildfire that ravaged the Greek island of Kythira over the weekend has been partially contained, Stavroula Malliri, spokesman for the Greek Fire Brigade, told AMNA.

“At the moment, limited fires continue to burn on Kythira in already scorched areas and especially on the southwest front of the island, which are being dealt with by ground forces and aerial means. There is no longer an active front. We are cautiously optimistic,” Malliri said.

Over 116 firefighters, 38 vehicles and aircraft including helicopters and reinforcements form across Greece, tried to put out a wildfire on Kythera, which started on August 4 and continued to burn for days. The Civil Protection Service declared the island in a state of emergency on Sunday.

The fire was hard to extinguish due to the gale force winds which pushed the blaze in different directions creating new fronts across inaccessible mountainous terrain, Kythira Mayor Efstratios Harhalakis told AMNA. 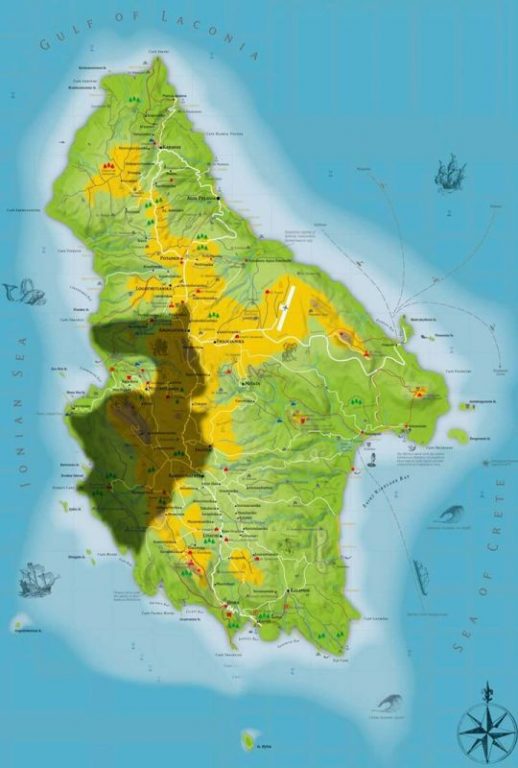 The gray area shows where the fire has passed on the island of Kythira. Photo source: EpitropiKythira / Facebook

Parts of the island faced power cuts, four of its settlements and the Myrtidion Monastery were evacuated on Saturday, with the fire service estimating that more than 2,000 hectares of forest and farmland have been burned.

Kythira residents meanwhile are pointing to serious deficiencies as well as a delay on the part of authorities to declare the island in a state of emergency.

The Committee for Tourism Development & Promotion of the Municipality of Kythira on Monday released a map which depicts the areas from which the fire has passed (gray area).

“We note that many parts of the gray area are not completely burned as the fire passed very quickly through them,” the committee said.

Moreover, the committee underlined that most of the island’s tourism spots and sites have been left untouched by the fire, “without this meaning that we underestimate the destruction of the the flora and fauna of Kythera”.

Since Sunday evening, more than 40 fires have broken out across Greece.

Strategic Tourism Investment on Crete Worth €408m Gets Green Light