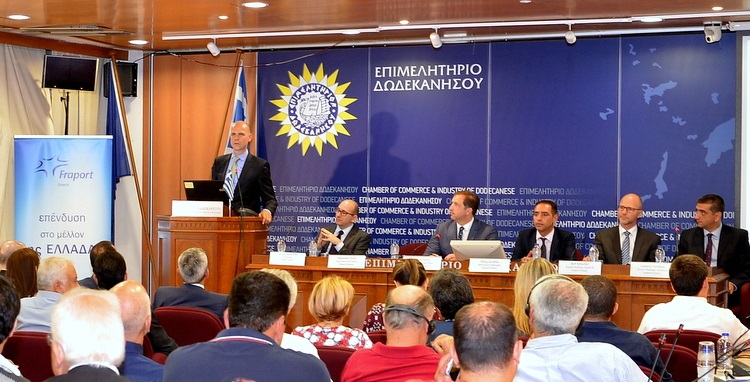 Fraport Greece presented its makeover plans for the “Diagoras” Airport on Rhodes, during a recent event held on the island in the presence of the company’s executives, tourism officials, airport partners, regional and local authorities.

The company’s development plans for Rhodes Airport include the construction of a new fire station, the refurbishment of the passenger terminal and the restructuring of  the landside parking area.

In order to improve the quality of services, the company will proceed with a series of changes at the airports facilities: The number of check-in counters will be increased by 13 percent, the security lanes by 71 percent, the departure gates by 15 percent, the baggage reclaim belts by 25 percent and the aircraft stands by 29 percent.

“Our goal is to create an airport with modern infrastructure and services in order to meet the needs of the local community and visitors from around the world,” Fraport Greece CEO Alexander Zinell said.  “We have already implemented significant improvements in daily operations by addressing key issues, which have been hindering the airport for years. Large scale projects that will significantly change the look of the airport are set to commence after the end of the high season,” he added.

The event was one in a series to be held at destinations across Greece, where Fraport will be operating local airports. The company aims to highlight its objectives and initiate a dialogue with the airport’s stakeholders and the local communities. A similar event was recently held on the islands of Mykonos and Corfu.