In less than two weeks runners and swimmers will gather on Patmos in Greece to participate in the sacred island’s first sports tourism event “Patmos Revelation”!

Taking place on the island between June 30 – July 2, the main aim of the organizer Municipality of Patmos is to highlight the element of sports tourism and attract as many tourists as possible to participate and also experience the sacred island’s history. The event is being held in cooperation with the Region of South Aegean and Active Media.

The event, which is now held under the auspices of the Greek National Tourism Organization, continues to attract registrations for participation from Greece and abroad. The organizers inform that registrations can still be made through the event’s official page and the racing kits for all participants can be received on Thursday, June 29; Friday, June 30; and Saturday, July 1, from 09:00-21.00 at the Patmos Cultural Center “PATMION”. To register press here.

The program of “Patmos Revelation” will include Kids’ Athletics by the Olympic and World Champion Periklis Iakovakis on Friday, June 30, at 09:00 at the football stadium of Patmos. 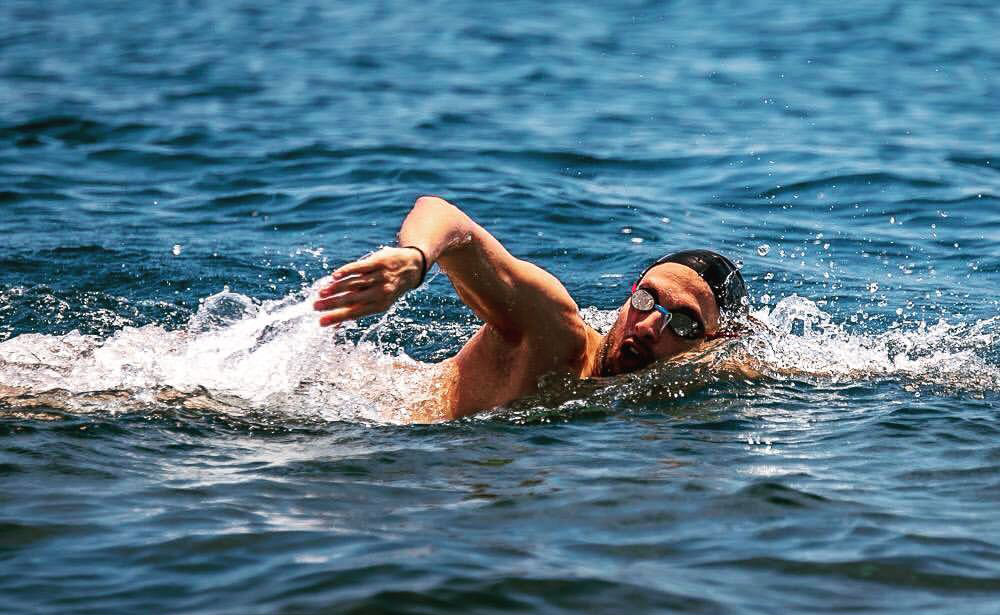 On Saturday, July 1, at 11am, the event’s open water swimming race will be held at Grikos bay. Swimmers will cover the 1 mile (1.6km) distance swimming route. Right before the start of the race a warm-up will be held by the team of the pilates instructor, Mandy Persaki. The safety of athletes will be supervised by Katerini’s Lifeguard School, Lifeguard Patrol.

On Sunday, July 2, running races will be held in the morning with Skala as the starting point. The 15km route, which starts at 8:15am, passes through two UNESCO World Heritage Sites (historic center of Chora, Holy Monastery of St. John the Theologian and Sacred Cave of the Apocalypse). The 5km route starts at 9:00am and the 1km route for children starts at 10:55am at Skala’s seaside.

The Greek national open water swimming team will be also be present at the swimming race, headed by European champion Antonis Fokaidis.

Press here for the detailed schedule of the “Patmos Revelation” event.

Getting to Patmos
Ferry routes by the event’s official sponsor Blue Star Ferries will offer participants direct access to Patmos. The Greek ferry company has announced an additional route on Thursday, June 29, at 3pm and will offer a 50 percent discount on tickets to participants/athletes and a 30 percent discount to their escorts/family members and vehicles and to those wishing to visit the event and the island between June 26 to July 6.

Greek ferry operator Dodekanisos Seaways is also supporting the event and offering a 30 percent discount to participants. The company, which carries out routes from and to Leros, Kalymnos and Samos, is expected to greatly boost the tourist traffic of Patmos.

Accommodation
Attractive packages for a 4-day stay (3 nights) are offered with transport and accommodation for 2 people (with prices starting at 260 euros) for those participating in “Patmos Revelation”. The official travel agent of the event VitaNTravel will assist all athletes and escorts with information on ferry routes, ferry tickets, car rentals and accommodation in the island. For more information, press here.

An official supporter of the event, Patmos Aktis Suites & Spa, a 5-star hotel of the “Divine Hotels” Group located at Grikos bay, is ready to provide high quality hosting services to the participants and visitors of the island.

“Patmos Revelation” is also supported by the AB Vassilopoulos supermarket chain and will offer products to participants and volunteers, while “Vikos” Natural Mineral Water, as an official sponsor of the event, will offer athletes the opportunity to cool off with the natural mineral water “Vikos”.

“Patmos Revelation” is supported by Sixt rent a car, which will cover all visitors’ car rental needs with its fleet. Official supporters of the event include 1001 flights and the event is assisted by SEGAS, IAAF Kids Athletics, T & G Patmos Rentals, Lifeguard Patrol. The event’s Strategic TV Partner is National Geographic.

Greek Travel Pages (GTP) is among the communication sponsors of the event.

Santorini and Sifnos to Host American Journalists and Bloggers