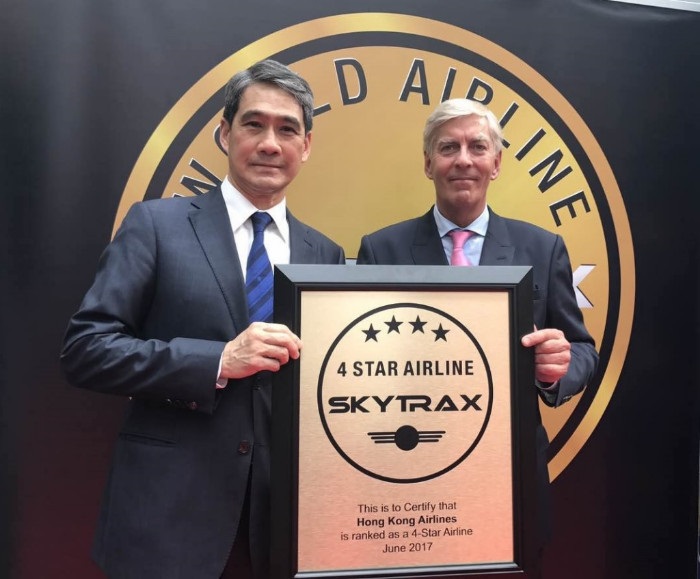 Hong Kong Airlines for the fourth time received the 4-Star Airline Rating at the 2017 Skytrax World Airline Awards, for the quality of its onboard product and staff services.

“With the new rating the airline jumped in global ranking from No. 29 to No. 24, becoming the only Hong Kong-based airline that made progress in ranking this year,” Hong Kong Airlines said in an announcement.

Vice Chairman of Hong Kong Airlines Tang King Shing received the honor on behalf of the company and announced that on June 30 the airline will make its debut in North America by adding a new flight service to Vancouver, Canada.

Regarding the airline’s airport services he said that “currently several Skytrax 5-star airlines have been the customers of the existing VIP lounge Club Bauhinia at Hong Kong International Airport. We are confident to bring our attentive services to more customers in July when our brand new VIP lounge at Midfield Concourse of the Hong Kong International Airport comes into service”.

In addition the first airbus A350 will join Hong Kong Airlines’ fleet in August.

Skytrax chairman Edward Plaisted complimented Hong Kong Airlines for its performance among regional airlines in the Asia Pacific and other international markets.

Established in 2006, Hong Kong Airlines today is flying to more than 30 major cities across the Asia Pacific region. It has also signed agreements with 16 codeshare and 75 interline partners.

Discover the World Greece & Cyprus is the General Sales Agent for Hong Kong Airlines in Greece.

Flydubai Teams Up with Amadeus for Loyalty Program