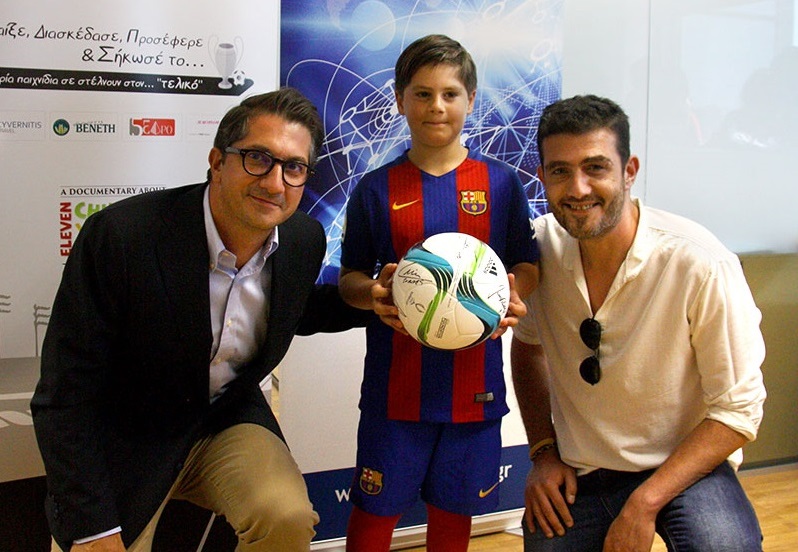 Corporate and leisure Greek tourism agency Kyvernitis Travel, recently held a special ceremony at its premises in Athens, to welcome the young winner of the “UniteTheMall” initiative, an event dedicated to multiculturalism and equality.

Organized by Eleven Campaign and Desmos Foundation, “UniteTHEMall” was held from March 31 to April 2 at The Mall Athens and brought together professional athletes and more than 30.000 sports fans. Kyvernitis Travel was the event’s Gold Sponsor.

Seven-year old Iosif Kelmaer was the lucky winner of the “UniteTheMall” competition and received the grand prize, the 2015 UEFA Super Cup official ball, which was signed by the Barcelona F.C. athletes and was donated by the UEFA Foundation for Children.

Kyvernitis Travel vice president Yiorgos Kyvernitis and Eleven Campaign representative George Hatzigeorgiou delivered the ball to Iosif. “I am a fan of Barcelona and I will place this ball on my wall, so that I can look at it for many years,” Iosif said.

On his behalf, Kyvernitis said he was happy that the travel company “participated in a remarkable initiative, which filled young and adults with joy. Especially the children learned more on the ideals of sports, which promote healthy competition and offer important elements that form their character.”