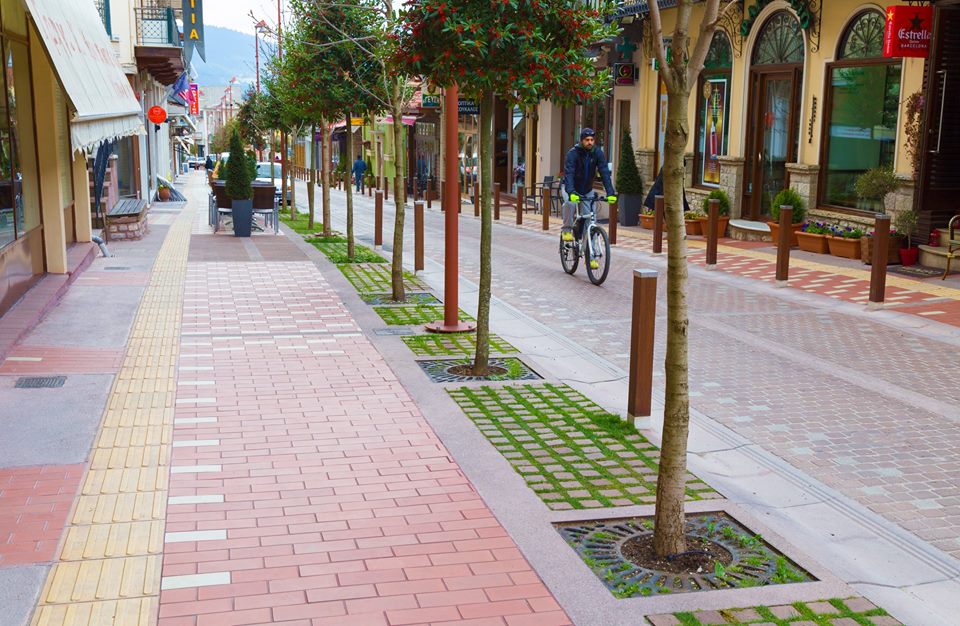 A project that redeveloped the center of Karpenisi town in central Greece has been internationally recognized as an inspiring example of high quality architectural design for public space.

The “Rehabilitation of Karpenisi Town Center” project by Greek architect Andreas Lampropoulos has received a Special Mention in the 2017 edition of the “UIA Friendly and Inclusive Spaces Awards”.

The UIA Friendly and Inclusive Spaces Awards were founded by the International Union of Architects (UIA) to encourage and acknowledge architects who have created exemplary friendly, inclusive and accessible buildings and public spaces. In 2017 a total of 76 entries were received from 28 countries across five continents.

The jury of the competition described the Karpenisi project as follows:

“Carefully designed streets and sidewalks that transform the image of the main streets of a mountain city, encouraging pedestrians and minimizing the dominance of cars. Access to the city center has improved considerably, especially for people with disabilities, while heated pavements ensure access even during snow and ice weather. Installing blindlines further improves accessibility for visually impaired people.”

The “Rehabilitation of Karpenisi Town Centre” project launched in 2011 when Kostas Bakoyannis was the town’s mayor. It was then continued by Karpenisi’s current mayor, Nikos Souliotis. The project’s architect Andreas Lambropoulos and his team designed the redevelopment of the city’s shopping center, focusing on interventions that enhance the quality of life, facilitate access for all and favor the development of the local economy.

The medals and special mentions will be formally presented on September 6 at the UIA Award Ceremony in Seoul, Korea, during the 26th UIA Congress of Architecture.

The medal winning entries, special mentions and all shortlisted entries will be exhibited on the UIA Architecture for All Work Programme Stand at the UIA Congress in Seoul during September 307. Subsequently they will be exhibited on the UIA Friendly and Inclusive Spaces Awards platform and promoted through publication on the UIA and Architecture for All Work Programme websites, social media and journals as well as those of UIA member bodies.