The Cayenne, driven by Porsche GB technician Richard Payne, towed the aircraft over a distance of 42-metres at the Air France H6 maintenance hangar at Paris Charles de Gaulle Airport, improving on the previous Guinness World Record title of 115-tonnes.

The Porsche Cayenne (4.8 metres in length) was connected to the Airbus A380 (73 metres in lenght) via a special towing attachment that sat on the Cayenne’s standard tow bar. 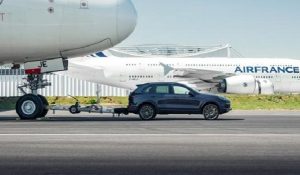 “Like Porsche, Air France Industries KLM Engineering & Maintenance thrive on excellence and pushing engineering boundaries,” said Gery Mortreux, Executive Vice President of Air France Industries. “This achievement is a new illustration of the way AFI KLM E&M is able to adapt to specific requirements, and the passion we put on every challenge we take. It was fun and exciting to watch the two machines together – our engineers were intrigued and impressed,” he added.

The Guinness World Record title was set by a Cayenne S Diesel, producing 385 hp and 850 Nm of torque. The exercise was repeated using a Porsche Cayenne Turbo S.