On the occasion of Europe Day on May 9, the Greek Foreign Ministry and the European Commission Representation in Greece will hold a joint event on Tuesday at the Stavros Niarchos Foundation Cultural Center.

The joint event will be held in celebration of the 60th anniversary of the signing of the Treaties of Rome, one of the most remarkable historical moments of the European integration process, and the 40 years of presence of the European Commission Representation in Greece.

President of the Hellenic Republic Prokopis Pavlopoulos will address the event and Deputy Foreign Minister Yiorgos Katrougalos will speak on behalf of the government. The event will also be attended by the European Commissioner for Migration, Home Affairs and Citizenship, Dimitris Avramopoulos; the EU Commission spokesman, Margaritis Schinas; and the Head of the European Commission Representation in Greece, Panos Carvounis.

During the event, an anniversary album for the 40 years of presence of the European Commission Representation in Greece will be revealed.

The orchestra of the National Opera, under the direction of Ilias Voudouris, will present a program featuring artists from Austria, Belgium, Bulgaria, Switzerland, Italy, Croatia, Malta, Norway, Romania and the Czech Republic.

The event will take place at 14:30 and be broadcast live via www.europeforall.gr. 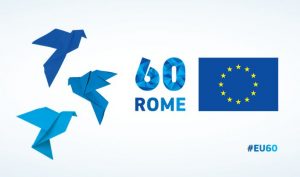 Europe Day held on May 9 every year celebrates peace and unity in Europe. The date marks the anniversary of the historical ‘Schuman declaration‘. At a speech in Paris in 1950, Robert Schuman, the then French foreign minister, set out his idea for a new form of political cooperation in Europe, which would make war between Europe’s nations unthinkable. His vision was to create a European institution that would pool and manage coal and steel production. A treaty creating such a body was signed just under a year later. Schuman’s proposal is considered to be the beginning of what is now the European Union. To celebrate Europe Day, the EU institutions open their doors to the public in early May in Brussels and Strasbourg. Local EU offices in Europe and all over the world organise a variety of activities and events for all ages.